JCB’s pivot-steer line-up has a new face – the TM420. The company’s TM320S has reigned supreme in the articulated telescopic market over the past few years and has been joined by a bigger brother designed to help ward off competition from Manitou’s new MLA.

As a sign of its booming popularity, today’s annual sales figures stand around the 800 mark, which is a far cry from the 49 units shifted back in its launch year of 1997.

The 320S slides under low-pitched buildings and through narrow feed passages thanks to its low 2.7m stance and sub-2.5m width. The operator has a high, unobstructed view from the centre of the machine, while the extra telescopic reach makes it ultra-versatile, too. 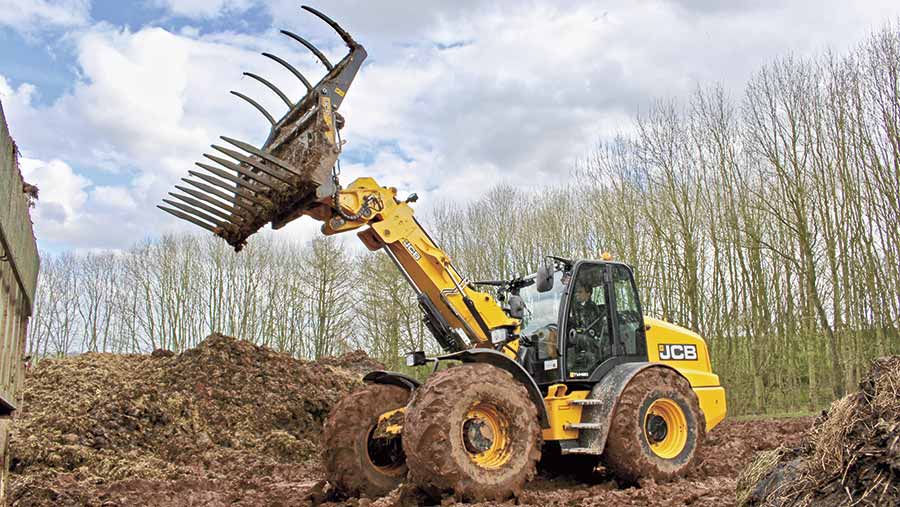 See also: The ultimate guide to buying a telehandler in 2018

Although this loader configuration can’t match the popularity of the Staffordshire firm’s Loadall telehandler range, it has always appealed to livestock farmers and, in recent years, has spread to energy plants and gained more interest from the huge North American market.

However, there is a new kid on the articulated loader block that should provide some direct competition for the 320S. The company also hopes it will quell any interest in Manitou after the old enemy relaunched its MLA at Agritechnica last year, following a hiatus from the bend-in-the-middle scene. The red machine has almost identical lift and power attributes and is bound to cause JCB salesmen a few headaches.

You may argue, then, that JCB’s TM420 has been built to squash any hopes Manitou had of claiming some of the 320S’s market.

The challenge was set for the JCB engineering team to develop more power and strength from the same chassis, without a radical redesign that might alienate the current owners and tempt them to try out the red newcomer.

To the untrained eye, you would be forgiven for thinking the finished article is identical to the smaller 320S. So it may be considered a success in looks, but what exactly have the engineers been doing for the past few years?

Although the 420 and 320S machines look similar, the former has more than 300 new parts that have been designed from scratch and mostly assembled around the front end of the loader.

JCB has stuck with its own 145hp, 4.8-litre four-pot Ecomax engine (also used in the 320S) that delivers 560Nm of torque and already meets the Tier 4 final emission regs.

Also avoiding the chop is the six-speed powershift gearbox and 160-litre/min hydraulic piston pump, all of which are made in the UK.

The cab stays the same, too. A raft of improvements were added in 2016 to the 320 and 320S, which was the first change since it was introduced in 2011. Apparently, the firm sought to make the 420 as familiar to existing operators as possible by changing only relevant parts, but this means owners that are happy with the performance of their existing machine will have little reason to upgrade.

Simple additions were added in 2016, such as being able to fling the doors back open on themselves with a release catch on both sides.

The 320S has small telehandler-sized axles housing 24in tyres, whereas the 420 has the large, 10-stud option fitted to JCB’s medium-sized 417 wheeled loader.

This allows it to sit on 480/80 R26 rubbers from Michelin (in either Agri or Bibload tread pattern) and still be under the 2.4m road width of the 320S. 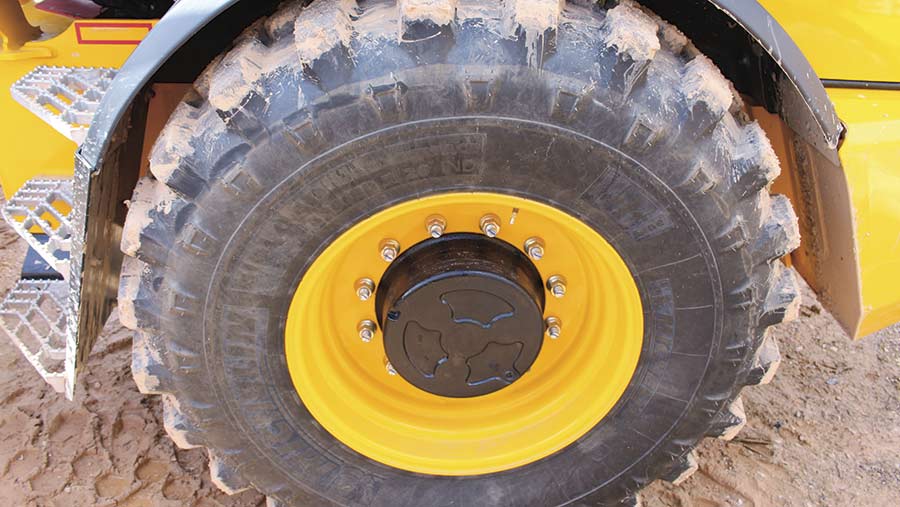 However, the 420 has been through a teenage-style growth spurt and, as such, sits 120mm taller and 659mm longer than the 320S, although there is an extra step to help access. Its cab sits in rather than on the axle, with flex coming from the articulating centre pivot.

320S users will be pleased to hear that the troublesome “banana link” on the headstock has now been replaced with new Z-bar linkage, which has been designed around a cast steel boom.

This change maintains the required tipping angle and has solved the issue of the banana linkage running away with itself on the tipping cycle, as the Z-bar linkage has control throughout the whole tip angle, we are told. 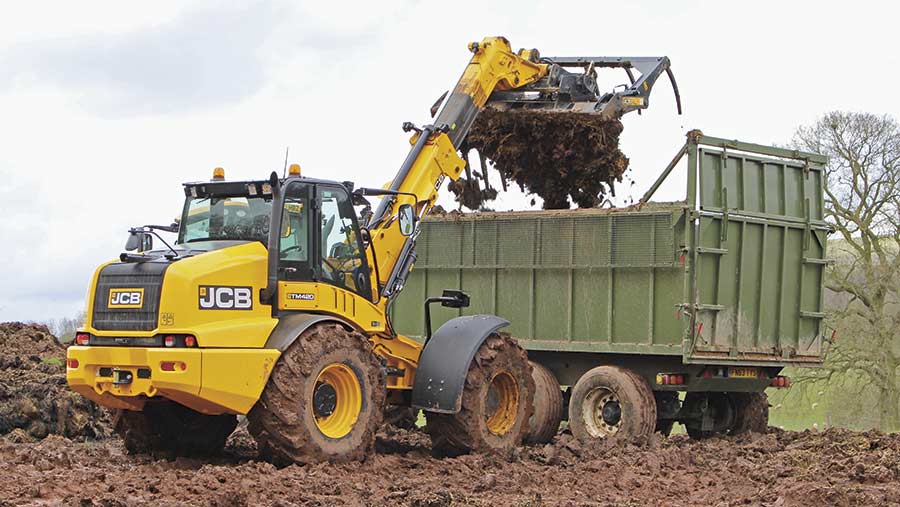 Using the Z-bar linkage prompted the front end of the boom to get a redesign and it is now cast from one piece of steel, with no welds providing weak points. This is also the case at the articulation point.

A full redesign of the boom mounting and pivot point using chunkier, one-piece steel has made the main stress points stronger and able to stand serious abuse. In this department, the 420 is cut from noticeably tougher cloth.

A standard feature added in 2016 were self-lubricating Dalmatian bushes, which means greasing is now as infrequent as oil changes – at 500-hour intervals.

Small graphite nodules are added across the bushes’ width, so as the pins – which are all larger on the 420 – wear this away, the graphite breaks off to act as tiny ball bearings, preventing metal-on-metal contact.

JCB suggests that if a maintenance package is taken out, the operator should never need to touch a grease nipple, other than the attachment locking pins that don’t run in bushes.

There are three choices of headstock on the new machine – the old-style Matbro pin-and-cone arrangement, JCB’s renowned Q-fit bracket and a more industrial option fitted to the 419S. Boom-end cushioning is a standard feature on every ram, too. 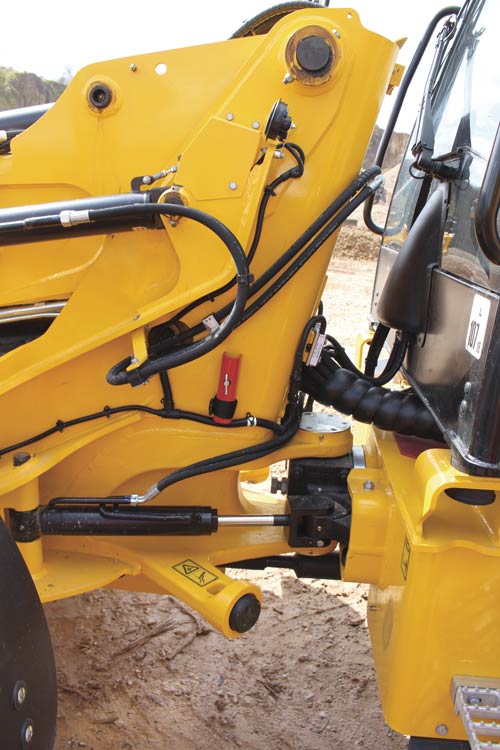 The final area to receive an overhaul is the hydraulics. Even though the same 160-litre/min pump is kept, the boffins at JCB have worked out a way of squeezing more capacity out of the same unit.

Larger hoses and bigger couplings have been the key to this across the whole machine. The 420 has given JCB the chance to reroute troublesome pipes from the 320S, particularly shortening ones that ran from the valve block under the cab to deep inside the boom that were a nightmare to change.

Although there are still some exposed pipes, they are for maintenance purposes only. However, visible pipes do detract from the overall look of the machine – and the addition of some easily removable yellow tin might have improved the appearance, along with relocating the horn to a less-obvious location.

That said, the new pipes do offer some impressive stats – at full height and reach, the 420 can retract and return the boom to the ground in about five seconds, with no need to have the engine revving flat out.

All these new components help increase the tear-out force from 6t to 7.2t. We had a go on a slippery Staffordshire slope loading muck into a trailer and the TM420 coped well in some challenging conditions. It never felt underpowered and was always able to roar away from the heap, no matter what we had on board, with the quick-reacting boom a particular stand-out.