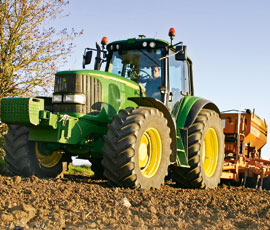 Mr Goodwin suggested the best cost-saving tip, according to the competition judges, and gets a brand new set of Michelin Ultraflex XeoBib tyres, including rims, fitted to his tractor – a prize worth £8,000.

Mr Goodwin impressed the judges with the attention he gives his soils. His top tip was:

“When cultivating, especially subsoiling, always carry a spade with you. Dig a small hole to check soil structure and set the machine up to just below any compaction layer.

“Fuel will be saved by not going too deep and areas identified as not compacted will not need lifting at all, saving time as well as diesel.”

As director of A & G Farming, Mr Goodwin works around 730ha (1,800 acres) of mainly stubble-to-stubble contracts in Northamptonshire and Oxfordshire.

It’s their Massey Ferguson 6490 that’s likely to receive the new tyres. “It’s got rowcrops on at the moment, but it won’t be that long before we’re on to corn-carting then back on cultivations,” he says.

Through the summer and autumn the tractor will be pulling a Horsch 4m drill. “We aim for minimum soil disturbance, so correct ground pressure is crucial.

“We don’t have the ability to change tyre pressures in the field, so tyres that are set up to run at the same constant low pressure on the road and in the field will certainly come in useful.”