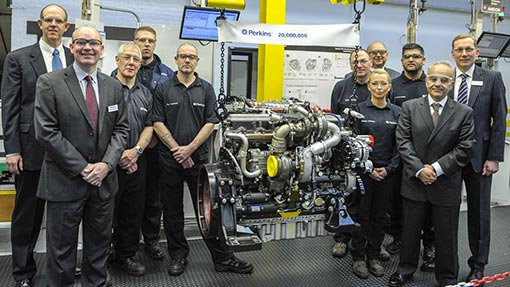 Eighty-one years after the brand was established, the 20 millionth Perkins engine – a 1206 two-stage turbo Tier 4 diesel engine – has rolled off the production line at the company’s facility in Peterborough.

At a ceremony attended by around 70 employees, Perkins president Ramin Younessi said: “Twenty million engines is a significant achievement of which we’re all very proud.

“Today, Perkins is one of the world’s leading suppliers of off-highway diesel and gas engines in the industry. Our engines are manufactured across four continents and power more than 800 different applications in the construction, power generation, agricultural, material handling, industrial and marine markets.”

The company was bought by Caterpillar in 1998. Some 20m Perkins engines have been built, of which at least 4.5m are thought to be still in service.

Perkins claims to have the capacity to manufacture 800,000 engines a year from its manufacturing facilities in Peterborough and Stafford, UK, Griffin in Georgia, USA, Curitiba in Brazil and Wuxi in China. Power outputs of the engines produced range from a modest 5hp unit to a marine engine at 2,600hp.