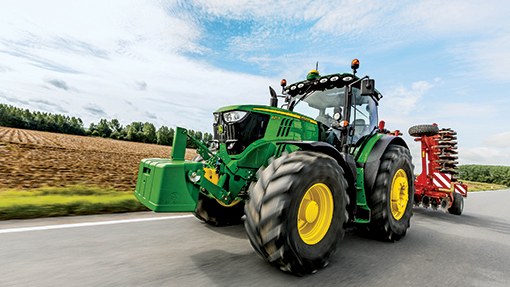 John Deere has been busy adding a few upgrades to its tractors, balers and sprayers. James Andrews reports.

From the driver’s point of view there’s a new Command Arm and screen taken from the bigger 7R and 8R tractors. This has a large, adjustable touchscreen on the front of the armrest, rather than the old one that was tucked away on the right-hand console.

It also gets a programmable joystick that can be set up to control any hydraulic function on the tractor.

The new Command Arm is only available on Direct Drive and Autopowr versions, so Auto Quad fans will have to stick with the old-style console.

Other upgrades include the option of an integrated front hitch with external controls as well as an auto diff-lock on Direct Drive models.

Articulated and tracked 9R-series tractors have also had some attention from Deere’s design team.

A more economical e18 powershift transmission – similar the e23 gearbox – has been fitted. This has manual and full auto-shifting modes as well as a custom setting that allows the driver to adjust the shift point.

Deere has also added a new hydraulic suspension system on the bigger articulated tractors to stop power hop. This senses when the tractor starts to bob up and down and adjusts the settings to counteract it.

Cummins engines also replace the Deere ones in some of the larger models.

Deere’s Kuhn-built big square balers have had a couple of updates, too.

The latest L1533 (90x80cm bale) and L1534 (90x120cm bale) models get double-tie knotters and a bigger combine-style blower to keep them clean. The new knotters are said to improve bale strength and in-field trails have been delivering higher bale densities than the 1433 and 1434 balers they replace.

A new self-propelled sprayer is also in the offing. The R4040 replaces the 5430i and comes with an updated chassis, engine and cab.

The engine is now a 235hp six-cylinder that boosts to 255hp. This powers three hydrostatic pumps that drive the wheel motors and there’s an electronic slip control system to improve traction.

In the cab there’s a new screen in the front pillar and a lower dash to improve front visibility. The sprayer itself hasn’t changed much, but there is a new high-speed induction hopper.