Big, brash, but somehow a little underwhelming. The Ranger finished comfortably in second place thanks to its enviable spec list, but the combination of five-cylinder engine and six-speed auto lacked the refinement to pip VW’s Amarok to top spot. 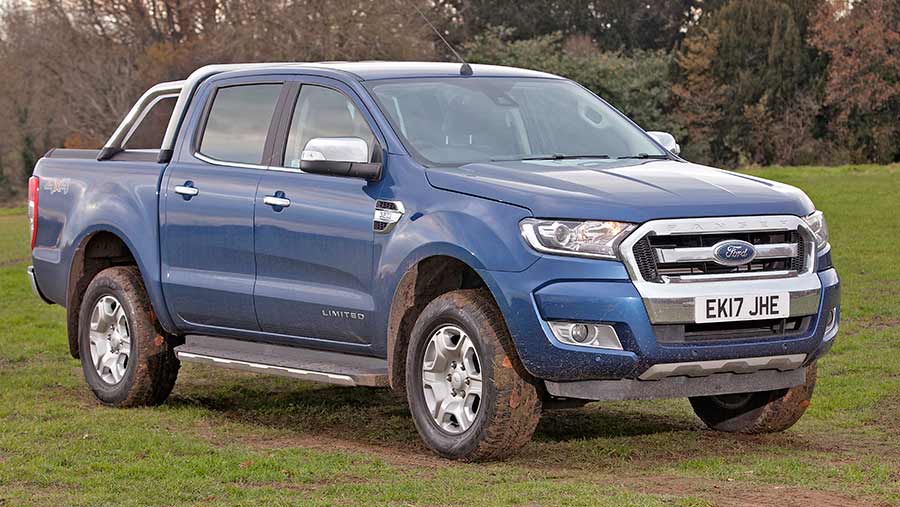 The Ranger carries the biggest block of our test group, but unfortunately that doesn’t equate to outright firepower.

Its 3.2-litre capacity is split between five in-line bores and it is far more raucous than the silky smooth song that emanates from the tailpipes of the V6 Amarok (albeit less ear-piercing than the tiddly 1.9-litre D-Max).

That meant it had to settle for second place in the power stakes – 200 horses – which is achieved at a comparatively lowly 3,000rpm.

It’s the same where torque is concerned, with the Ranger’s respectable 470Nm way off the VW’s top mark of 550Nm.

Both, too, set their figures at just 1,500rpm – one of the perks of carrying a big block and slower-spinning crankshaft. 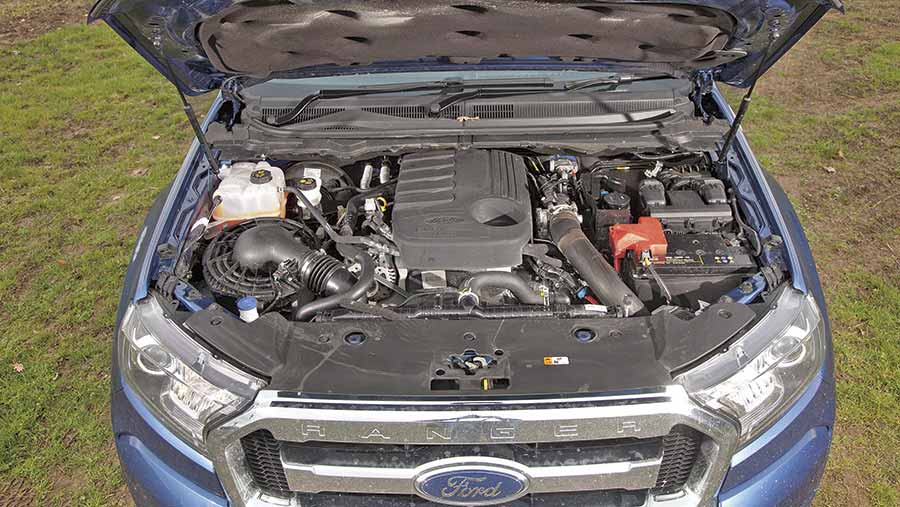 However, while the Amarok operates in a classy, polished manner, the Ranger is always agitated and aggressive.

Too much power and not enough traction means it constantly spins the rear wheels on the road as it huffs, puffs and hollers its way to 62mph in a surprisingly average 10.6secs.

One look at the sound measurements reveals everything you need to know, with the 76.5dBa blasted out during acceleration enough to spoil any conversation.

It also chucks out carbon dioxide at a rate of 231g/km – the worst by some distance – and has a manufacturer’s claimed consumption of 32.1mpg.

That might look pretty dire, but it wasn’t far off the 29.96mpg – third place – we achieved over our 100-mile drive. If it’s economy you are after then it makes more sense to go for Ford’s 2.2-litre engine.

Chrome is the order of the day on the outside – rear bumper, tubular sports bar and grille to name a few – and there is something distastefully chintzy about the paper-thin plastics of the interior.

However, the list of goodies should revive the interests of anyone planning to clock up a few miles.

For an extra £1,350 you get the driver assistance package, which contains a lane keeping aid (not overly useful), traffic sign recognition (handy if you get lots of speeding tickets), collision mitigation (rams on the brakes if you’re about to have a prang), automatic high beam lights (if you’re lazy) and adaptive cruise, which is good for long, boring motorway stints. 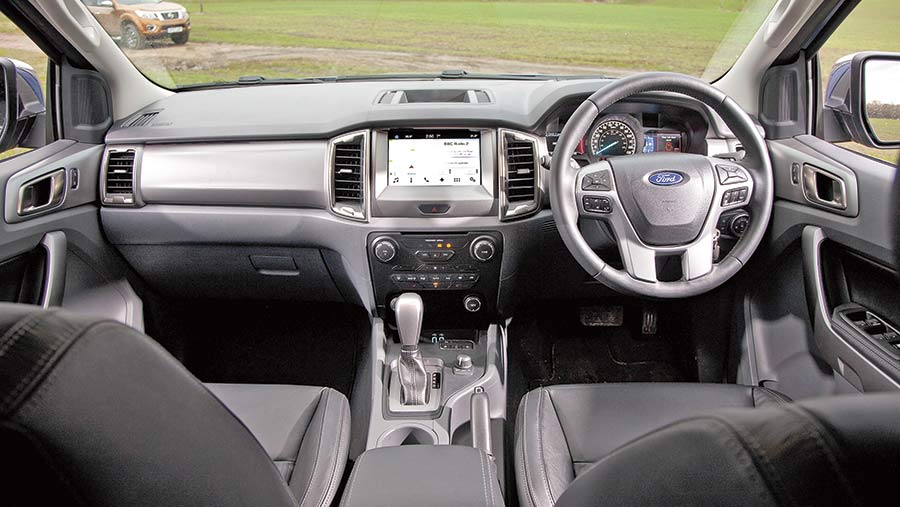 It is clearly an expensive package and not worth it if the truck is going to spend most of its time dossing around the farm, but if it is doubling up as a family wagon, it’s definitely worth giving some thought to.

Ford’s 8in touchscreen also turned out to be a real bright spot.

It was the best of the bunch, with Bluetooth, DAB, voice control and a super-duper reversing camera that can zoom in to give a close-up of the tow ball, as well as providing an annotation to help line up the trailer and save any embarrassment during reversing manoeuvres.

Add into the mix a tyre pressure monitoring system, auto headlights and rain-sensing wipers, a cool box in the centre console and a heated front windscreen that defrosts in seconds and the Ranger’s package starts to look very appealing.

However, the controls are plastered up the centre console in a fairly haphazard manner, which makes it hard to find what you’re looking for while driving.

Comfort is also a strong point. The leather driver’s seat is electrically adjustable and the rear seats were good, too – both in terms of cosiness (thanks to a more reclined position than the upright style of most others) and leg space.

It’s worth mentioning that the Limited model isn’t actually top of the Ranger line-up – that position is held by the Wildcat, which is mechanically identical but gets lots of extra logos, titanium-style trim and bigger alloys.

Like its rivals, the Ranger can do on-the-fly shifting between two- and four-wheel drive through a little dial. It gets a lockable rear diff for getting out of really hairy stuff, too – just like the Hilux.

That said, it comes with smart C-channel slideable lash-down points that are pretty handy, along with a 12v socket, and our test vehicle was fitted with a pukka £1,380 Mountain Top cover.

Also bear in mind that the Ranger is a bit of a monster. It’s the longest and heaviest of the bunch, which can make it a pig to park. 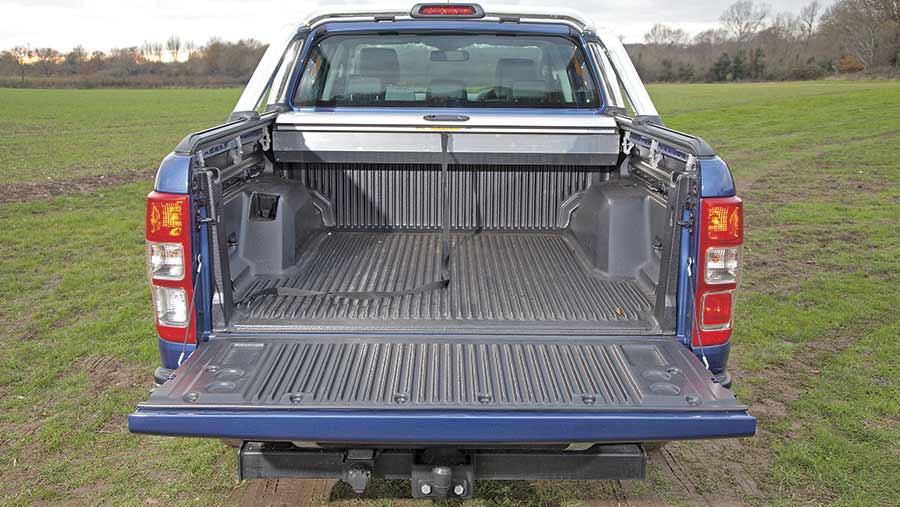 Ford is the only manufacturer in the test to offer two different engine sizes on some of its trucks. The workaday XL is the entry level and comes with a 2.2-litre engine, offering 130hp or 160hp though six-speed manual transmissions.

There are a few mod cons included as standard, with electric and heated mirrors and a DAB radio being the pick of them.

Second in line is the XLT, which only has the 160hp engine option, but you are upgraded from steel to alloy wheels, cruise control and air conditioning and the smaller 4.2in touchscreen.

The Limited spec is the model we tested and comes with a host of extra toys as well as the optional 3.2-litre five-cylinder 200hp engine.

Automatic transmission is available for the first time, with creature comforts including an 8in touchscreen, climate control, rear parking sensors and heated leathers.

Top spec comes in the Wildtrak guise and has the 3.2-litre engine as standard. However, there isn’t a lot more to shout about here, with the most appealing upgrades being a rear camera and bigger alloys.

Our choice would be the Limited, as you get the big engine and plenty of tech.