There was little to dislike about the smooth-operating Amarok and it deservedly secured top spot in our rankings. The comforting thrum of the V6 engine, suave-shifting eight-speed auto box and easy-on-the-eye interior were all big pluses.

The only pitfalls were its lack of a low-range option and smaller 3,100kg towing ability. Even so, it was in a different league to its competitors. 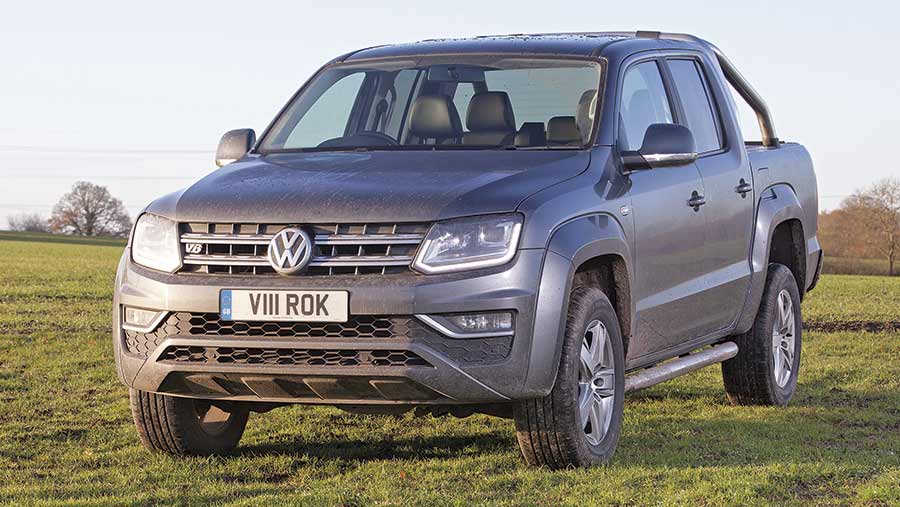 The Amarok was the only truck in our test with a six-pot engine. The refined V6 was smooth, quiet and eminently satisfying to drive.

It had an extra cylinder over the Ranger and two more than all the others, which meant under acceleration cabin noise was a moderate 68db, whereas the 3.2-litre Ford shouted at 76.5db.

Volkswagen has scrapped the optional 3-litre lump, with the bomb-proof 3-litre now the only power-pack offered in its pickups.

Acceleration stats offer one possible reason for the company’s decision to ditch the smaller engine, as from standstill it takes just 9.1secs to reach 62mph – the fastest of the lot by a distance.

The eight-speed auto box doesn’t quibble when shifting under load, either. If we were being critical, there is a small jerk between first and second, but after that it breezes through the cogs with no break in drive. 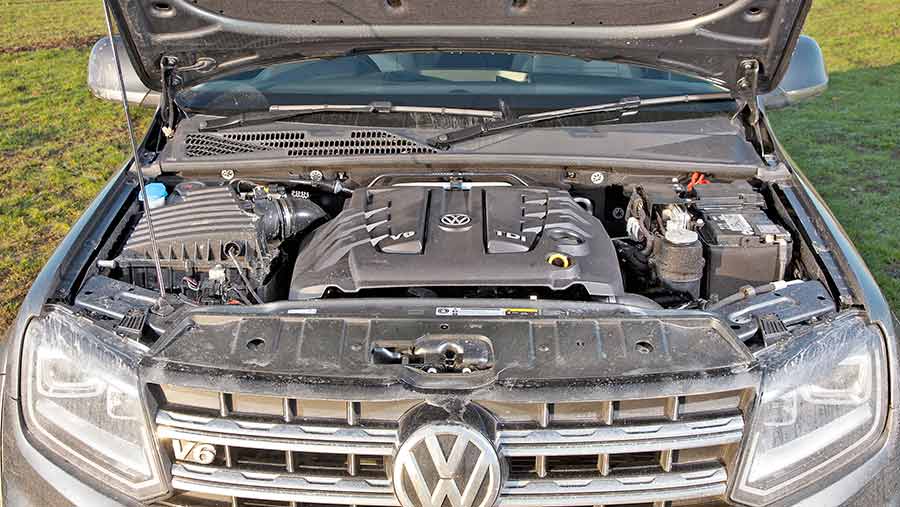 Unlike the others, it comes with permanent four-wheel drive, which is ideal when changing surfaces. However, if it spends most of its time on the black stuff, it may chomp through tyres a bit quicker.

It was also the only truck to have disc brakes all round, further enhancing its on-road prowess.

Weighing 2,178kg, and with its 3-litre block, meant the economy figures were unremarkable.

A fifth-place finish with 28.75mpg after a mixed driving route was somewhat below the manufacturer’s claimed 36.2mpg (combined) and a fair way behind the frugal Isuzu D-Max at 31.68mpg.

Inside is standard VW fare with logical controls and the sort of nicely finished trim you would expect from a member of the Volkswagen Audi Group family.

In fact, it feels only a whisker away from its SUV sibling – the Touareg – in offering heated leathers pews in the front and Apple Carplay and Android Auto for smartphone connection through the screen.

Views down to the front of the bonnet are good, with front and rear parking sensors and a decent camera – mounted under the tailgate – for hitching a trailer. 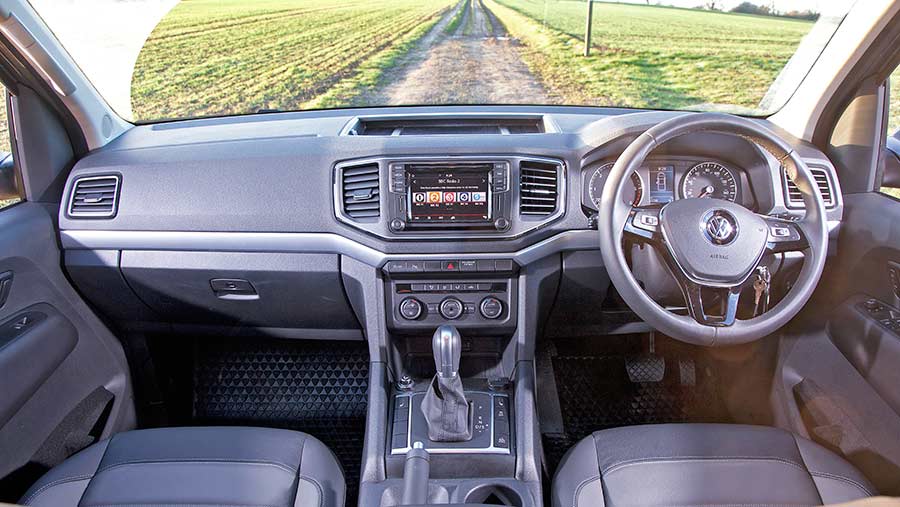 At a little over 6in, the touchscreen is on the small side, but it’s simple to navigate through eight clearly labelled external menu buttons.

Good-quality plastics are smart, if slightly plain, but we still preferred the tried-and-tested VW design over the cluttered dash of the Toyota Hilux.

Cruise control buttons are still mounted on the indicator stalk, which VW has been offering on most of its cars since the mid 2000s.

Integrating them onto the steering wheel would make it easier and safer, removing the need to peer around the wheel to find the right switch.

The lack of auto-lights and folding mirrors was also a disappointment on a truck that costs the same as a deposit on a semi-detached house.

Moving on to some untouched grass banks gave us chance to see if the Amarok was more Chelsea tractor than farm wagon, but even there it managed to emulate the kid at school who was football team captain and A-star pupil, breezing up them with consummate ease.

This is down to the permanent 4Motion four-wheel-drive unit, which adjusts traction to where it’s needed.

We were initially sceptical about the lack of a low-range box and still feel that in the worst conditions, you may be cap-in-hand needing a tow when others such as L200 and Hilux would dig deep, drop in the low box and get out. 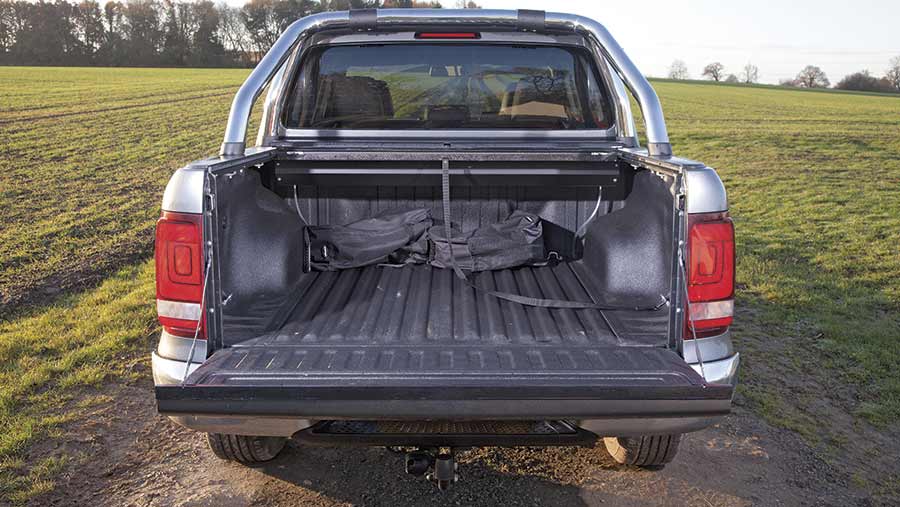 The ride was pleasant and equal to the Nissan Navara (that has coils at the back) at the top of the pile, soaking up bumps and making it bearable for a second row of passengers.

The Amarok falls down in the towing department and can only pull 3,100kg. It’s not a complete disaster, but the mythical 3,500kg figure is still out of reach, especially when its smaller-engine rivals have the extra 400kg in the bag.

This, coupled with a titanic-sized turning circle of 12.85m, means towing isn’t its strong point.

If you can dig that bit deeper into the coffers, the 224hp V6 version is the quickest and most powerful Amarok VW produce, and the one we would pick.

Currently, there is only one other power option from the same engine, kicking out a slightly smaller 204hp sitting. In base spec this will cost you £25,510 (OTR excluding VAT). Since the facelift model was introduced, VW has dropped the two-litre engine option.

With the smaller power option, there is a choice between the eight-speed auto and a six-speed manual box and a selectable or permanent four-wheel-drive system.

There are only two spec options, with the standard Trendline version offering climate control and the same 6.3in screen, while the superior-spec Highline option is there if you just can’t do without those heated leathers and Xenon headlights.