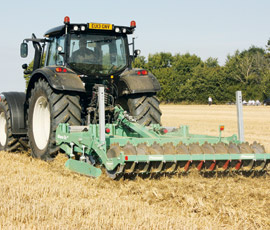 If you’re looking for a new cultivator or drill, Power in Action on the Essex/Suffolk borders was the place to be last week.

Yorkshire-based firm Plowman Bros made its name building high-spec livestock containers, however the company has now moved into cultivation equipment. The tough-looking Plowman Omni-Til (pictured) first appeared at this year’s Great Yorkshire Show, but this was the first time it was seen in action.

The key thing, says the company, is the shape of the legs. These are tapered to cut power requirement and have a short point and wing set well back to give a lifting effect behind the leg. There’s a choice of wing widths too, that go from 150mm to 300mm depending on how much soil movement you want.

508mm concave scalloped discs run behind the tines and a spined roller at the back helps keep the machine pushing ahead. The heavy-duty construction includes bushed pinholes all round and triple-sealed bearings, says the company.

Both 2.5m and 3m versions are available now, with 4m, 5m and 6m available soon, and the Plowman can work from 150-400mm (6-16in). Power requirement obviously depends on depth and soil type, but the company says that 150-300hp should do the trick. At Power in Action, the machine was being pulled more than adequately by a 215hp Valtra.

A big set of 12m rolls is now becoming de rigueur for anyone with a lot of land to cover. No surprise, then, that Suffolk firm Claydon has made its first set. Overall width is 12.3m to give a bit of leeway for those on 24m tramlines. Total weight is 9t and an accumulator system keeps pressure uniform across the whole machine.

The whole thing folds down to 2.6m for transport and overall height when folded is kept low. Hydraulic brakes are standard but you can have air-anchored ones as an option. A stone box is also standard. Cost is £28,500. 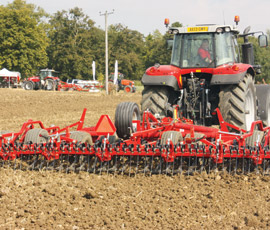 Opico’s He-Va Euro-Tiller can be used straight on fresh plough, after a disc and tine operation or overwintered plough. Multiple rows of aggressive spring tines and seedbed tines combine with track eradicators, a shatterboard and straw rake to give good soil flow. Widths go from 6m to 10m and there’s limited availability for this autumn. No price yet.

It’s been a long time since Lemken’s clever plough press was first announced, so it was good to finally see it at work. A series of double ring presses attaches to the plough – what is clever is that if you change the furrow width, the presses move out with them.

The pressure applied by the presses can be altered from 0-95bar. The unit at Power in Action was set at a relatively modest 15-20 bar, but was doing a surprisingly good job. It won’t have the same effect as a double-gang towed press, of course, but Lemken reckons that the system gives about two-thirds of the effect.

For farmers and contractors with spread-about land it could be just the ticket, although it is available only on Lemken Jewel 8 ploughs. Cost of the press is £8,000.

The wet autumn and winter of 2012 – not to mention the widespread availability of 150-200hp tractors on farms – has meant that mole ploughs are back in vogue to help channel water into field drains. In fact, there were several units at work at Power in Action.

Quivogne UK was showing its UK-made mole plough influenced by the popular Michael Moore designs. Quivogne says that it has updated the units by making them mounted rather than trailed and moved the leg a metre or so towards the front of the unit to make it easier to lift.

The twin-beam layout is said to cut horsepower requirement by 20% compared with a single-beam unit, says the company. It also fits inside the tractor wheelings, so it only runs on untouched ground.

The unit has only been available since May, but the company says more than a dozen units have been sold. Most contractors are already well kitted up with mole drainers, so 80% of these units went to farmers.

Meanwhile, Essex-based dealer Brocks was showing a range of TWB Engineering subsoilers. The single-leg TWB Magic Mole has a smooth, single-section skid unit, so there are no worries about mud working its way into the cavities often left on machines where two skid sections are welded together. 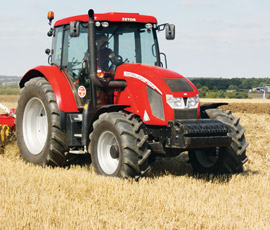 This was the first time that Czech tractor maker Zetor had attended the event, which says something about its ambitions to push into the arable heartlands. It was using a pair of new 140hp Forterra HSXs with three-step powershift to pull Pottinger Synkro cultivators.

That policy will no doubt be bolstered by the launch of 150hp heavy-duty models at next year’s Lamma and the arrival of a 200hp model later that year. Zetor says it has sold some 60 Forterra HSX models in the UK.

It was only in June that Suffolk firm Landquip took on the import of French-made one-pass Duro-France strip-till. But interest from farmers has been high, says Landquip’s Richard Abbot, with a good number of demos booked by farmers this autumn.

Initial tests in the UK suggest the system works well and the trash wheels are comfortably able to deal with UK levels of straw.

As well as the obvious benefits in fuel consumption of only cultivating a proportion of the field (rather than every square inch, as happens currently), the system is also said to be attracting farmers who have a problem with blowy soils and those who suffer flooding.

The eight-row machine on show was set up at 500mm centres for rape sowing, but spacings of 450-850mm are possible. Transport width is 3.2m. It was fitted with a standard Monosem drill.