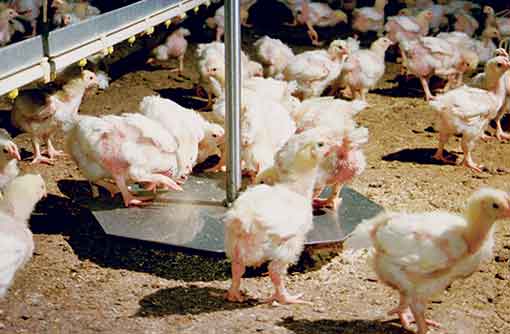 Precision farming is as important in poultry production as it is in any other area of agriculture. Caroline Stocks reports from an RASE event

Investing in Precision Livestock Farming (PLF) could help poultry producers convince retailers and consumers about the high levels of welfare that are commonly found in intensive systems.

Addressing the Royal Agricultural Society of England event in Derbyshire, Mr Lague said farmers should not be scared to use specialist equipment, such as cameras and microphones, to help them manage their birds.

Predicting that 20% of poultry producers would be using the technology by the end of the decade, he said: “If the industry is to be successful, we need to embrace PLF and rebrand it as ‘intelligent farming’. It isn’t going to replace farmers, but it will refocus what they are doing.”

“In the past, with small farms, people had sufficient time for observations. “But it’s difficult to observe individual animals as farms get larger,” he told delegates. “It’s inevitable to use technology to get the best from your livestock.”

By measuring and monitoring inputs and the responses of birds, technology could be used to model and predict the outcomes of changing management practices, such as heating and ventilation, he said.

Analysing the data also made it possible to create early-warning systems, to alert farmers to any unplanned changes and give a daily spreadsheet of information which informed the farmer about birds’ growth, he added.

“PLF is good at detecting changes in animal behaviour. Farmers can react to it by management intervention, and the system can monitor how those changes have impacted, for example, checking response to a vaccination.

“It can also identify dips in growth, which can be due to issues like blockages in the feeding line.”

But while more and more animals would find themselves living in intelligent environments, based on measured needs, Mr Koenders said it was vital farmers understood how to respond to the data created.

“We have the technology, but farmers need to learn from the data and incorporate it into their daily management.”

Speaking at the RASE conference, Mr Speller, who rears 180,000 broilers in Chesterfield, Derbyshire, said he was using data collected by technology on his farm to question claims by retailers about bird welfare.

“By collecting enough information, we give retailers evidence which they can pass on to consumers to show that intensive systems aren’t bad in terms of welfare.

“Retailers need data so that, if a consumer questions them, they can give scientific arguments. It’s up to us to use technology to collect that data if consumers are going to be convinced.”

Mr Speller said by collecting real-time data on feed and water consumption, bird temperature and liveweight gain via automated systems, he was instantly alerted to problems in his flock and able to make changes to rectify them.

By ensuring his birds were happier, he had been able to streamline his production system, improve growth rates and reduce costs.

But while he backed technological developments, Mr Speller said it was still important traditional stockmanship skills were not neglected.

PRECISION LIVESTOCK FARMING IN THE HATCHERY

Scientists are investigating ways to use lights and sounds to replicate natural hatching conditions in a bid to improve growth rates of chicks born in incubators.

Researchers at the Royal Veterinary College are looking at how incorporating lights and recordings of “pipping” sounds can affect how long it takes for a chick to hatch.

Incubated eggs can hatch hours apart from each other, which can stress chicks and lead to depressed weight, lack of uniformity and reduced quality, said Qin Tong, an early stage researcher at RVC.

She and her team found that using a “pipping” sound from a mother hen delayed hatching by four hours, but had no long-term effect on chick quality.

While research was still ongoing, Miss Tong said that, by combining light and sound, they hoped to alter hatching windows to produce optimal conditions.