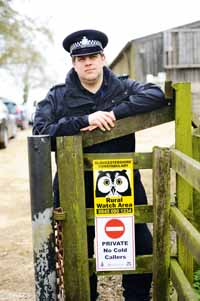 Rural crime is on the increase with more tractors, telehandlers and other farm machinery being stolen than ever before.

An ever larger number of farms are now being targeted by organised gangs which can have a tractor stolen and on its way abroad before you notice it’s missing.

According to Gloucestershire Constabulary’s Rural and Environmental Crime Officer, Jon Palfrey, the increase in reported rural crime is largely down to the greater success police are having in controlling urban crime. Life, it seems, is now less risky and more profitable for criminals to operate in the countryside.

“There is no doubt that criminals are now turning increasingly to farms to provide their illicit gains,” he says. “Farms, by their very nature, are usually some distance apart, relatively isolated and usually present easy pickings for thieves.”

But, he insists, providing adequate security for farm buildings need not be about purchasing expensive CCTV systems along with floodlights, security gates and high fences.

“A lot of it is about commonsense, being vigilant and having working practices and routines which always make things difficult for thieves to operate,” he says.

He adds though, that an important part is for farmers to talk through their security issues with their local rural crime officers and where possible, work as a community rather than individuals to deter thieves.

Having targeted a tractor or an ATV, criminals make it their task to steal it, usually having already mapped out a route for its disposal. The farmer’s task is to make such thefts as difficult as possible.

Farm security then, is now more important than it has ever been and, with the help of Jon Palfrey, we take a look around what many will recognise as being a typical set of buildings used by an arable or livestock farm.