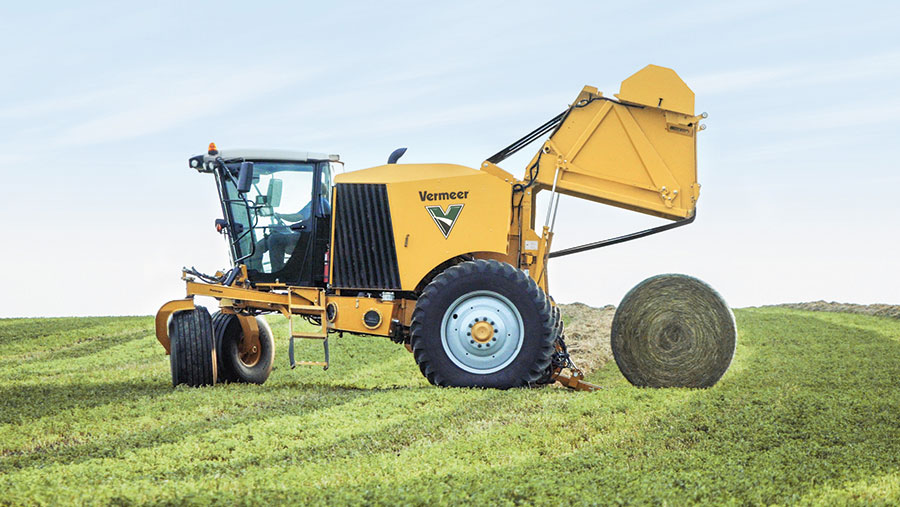 There are already self-propelled sprayers, mowers and foragers, so why not a round baler? A new development from US maker Vermeer introduces a level of automation that takes away many of the driver’s more irksome tasks

Round baling has plenty going for it, but the endless pauses, shunting back and forth and yanking of levers (prodding of buttons, if you’re lucky) can make it a tedious process for the driver.

But in a bid to iron out the job’s wrinkles, Iowa-based firm Vermeer has come up with a prototype self-propelled round baler that promises to take many of those tasks out of the driver’s hands.

That means everything from stopping and starting the machine to turning it sideways on hillsides and releasing the bale is performed automatically.

The maker has also worked hard to give the driver a smoother ride over rough terrain and created a tight enough turning circle so it can swing directly into the next windrow.

The ZR5 concept was unveiled in September 2017 at the annual Husker Harvest Days event at Grand Island, Nebraska – an area that produces a huge amount of round-bale hay and alfalfa to help feed the so-called Beef State’s six million-plus head of cattle.

Here farmers and contractors run sizeable fleets of tractor and round baler combinations and often struggle to find enough decent labour to operate them.

Therefore, the fact that the machine can potentially do the job of two such combinations should go down fairly well. 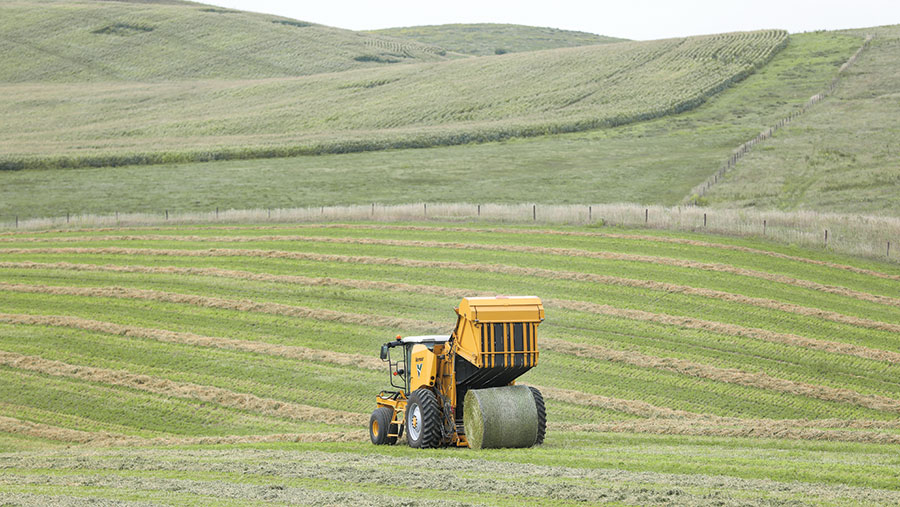 Sadly, it’s not a continuous baler (not yet anyway), but Vermeer says it still offers considerably higher output and better driver comfort than the best tractor-pulled machines.

It’s also being billed as one of the biggest developments by the firm since its founder Gary Vermeer invented what is thought to be the first round baler back in 1971.

So how does it work?

Starting at the front end, Vermeer has fitted the machine with castor wheels – clearly inspired by the zero-turn mower market – that allows it to spin around on a sixpence.

In field mode these castors are unlocked, which transfers steering duties to the hydrostatically driven rear wheels.

These turn the machine by varying their speed and direction.

As well as letting the driver swing easily into the next windrow, this means the machine can quickly spin though 90deg for depositing bales safely on hillsides, says ZR5 product manager Josh Vrieze.

This process can also be incorporated into the machine’s automatic bale tying procedure (more on that later), so the driver can sit there swigging tea while it gets on with it. 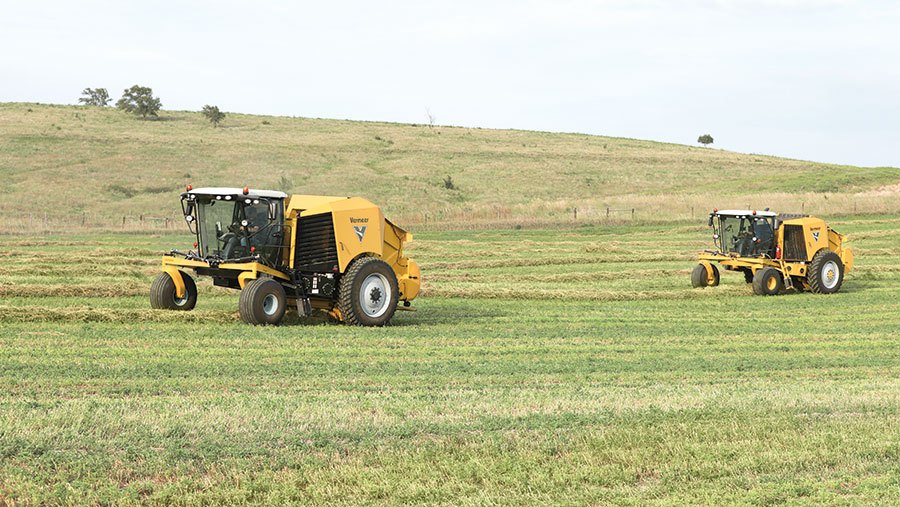 Switching to road mode locks the castors in place and activates a ram, which steers the front wheels.

This means it can travel safety at speeds of 48kph (30mph) or more.

Meanwhile, the independent hydraulic front suspension helps iron out the bumps, even when bouncing over rough terrain at baling speeds of up to 12kph (7mph).

To help make the most of that front cushioning, the Claas combine cab has been mounted just behind the front wheels. With nothing other than the castors in front, this also means the driver gets uninterrupted views of the swath ahead.

The downside of this set-up is that it makes it impossible for the driver to see the pickup or the tailgate with the naked eye. But to get round the problem, cameras have been fitted in both locations.

As Vermeer points out, this actually makes the job more comfortable for the driver, as it puts an end to having to constantly peer over the shoulder. The pickup reel camera is also positioned to look right into the throat of the baler so the operator can keep an eye on crop flow.

This drives a hydrostatic transmission which, as well as giving the flexibility to independently adjust the speed of the rear wheels for in-field steering, gives infinite speed adjustment and the opportunity to automate stopping and starting.

The baler unit itself is also hydraulically driven, says Mr Vrieze. That means the speed of the pickup and belts can be adjusted independently, allowing the driver to tweak settings according to the conditions.

It can also be set to speed up the belts during the tying process to complete the bale faster and get back into work. Engineers are playing around with different speed settings to see which gives the highest output.

For these early prototypes, Vermeer has based the design on one of its largest variable-chamber belt balers.

However, the ZR5’s design allows the baler unit to be removed quickly and simply, which means other units could be adapted to fit. 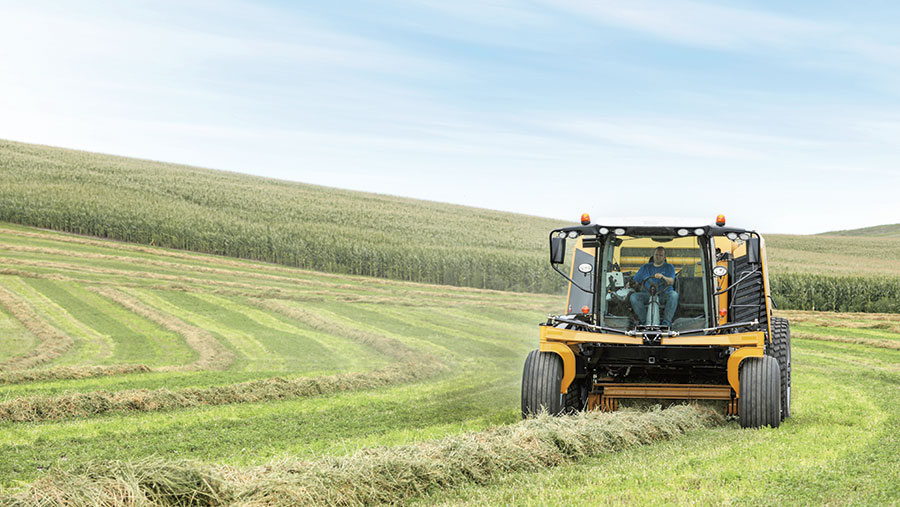 There is also a chance a non-stop baler could be installed in the future. “We believe in a continuous baling solution and are working to make that concept a reality,” says Mr Vrieze.

But for the time being, the main purpose of the baler unit removal process is to make maintenance more straightforward.

All the operator has to do to remove it is disconnect a hydraulic coupling and wiring harness. The baler unit can then be lowered to the ground hydraulically, allowing the self-propelled unit to drive away. All in, the process takes a couple of minutes.

Vermeer also expects the tractor unit to outlast several balers, so this function makes it easy to add in a replacement.

One of the keys to the ZR5’s speedy operation is its automatic baling mode. Once set up, this means the driver simply needs to steer and press one button when prompted to do so.

When the bale is formed the machine will automatically come to a stop and cut the pickup drive, allowing the tying process to take place. If programmed to do so it will then perform a quarter turn as the bale is tying, before opening the tailgate and dropping the completed bale.

The operator can tweak settings on the cab’s monitor to change the angle so it lines up with other bales in the field, or adjust the angle based on the slope of the hill so the bale doesn’t roll away.

Finally, it will close the tailgate, pivot back into the work position and prompt the driver to press a button, sending it straight back into action. “This takes the steps to complete a bale from nine down to one,” says Mr Vrieze.

As well as safer placement of bales on hillsides, Vermeer claims the quarter-turn function makes the bale collection process up to 35% faster.

The ZR5 is still in the concept phase and Vermeer is working to hone the design and add a few more features to this process before its commercial launch.

Vermeer hopes to have some machines working on US farms in 2018, which is when potential buyers will get an idea of how much it’s going to cost. Production models are then expected to be available for the 2019 season.

Initially the maker will be focusing on the North American market, but it could introduce the machine in other countries if there is sufficient demand.

However, the fact it sits at just over 3.6m (12ft) wide means it’s too big to travel on many European roads without an escort.

Vermeer isn’t the only manufacturer to have a stab at building a self-propelled baler. Here are a few of the other examples:

Krone As far as we know Krone is the only other manufacturer to have a serious stab at a self-propelled round baler. Its baler and wrapper prototype was unveiled in 2000, but never made it into production. 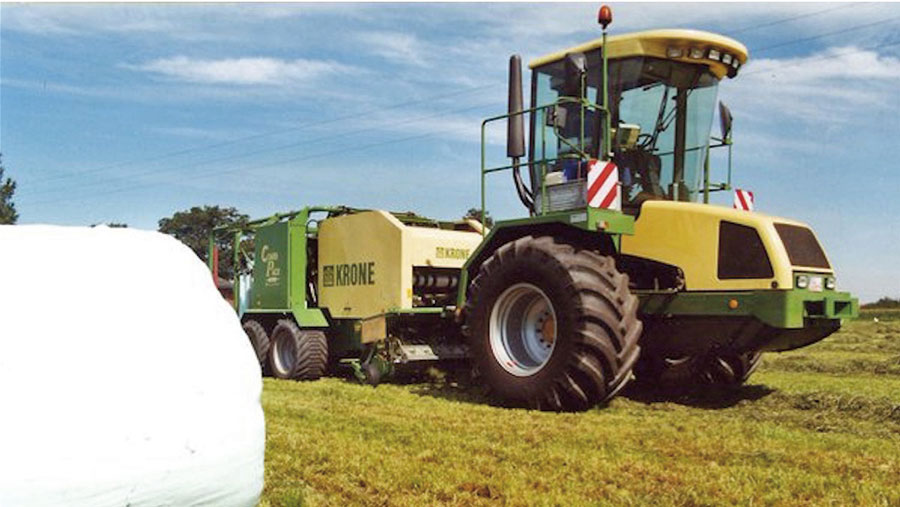 New Holland This 1426 is one of several self-propelled small square balers built by New Holland. 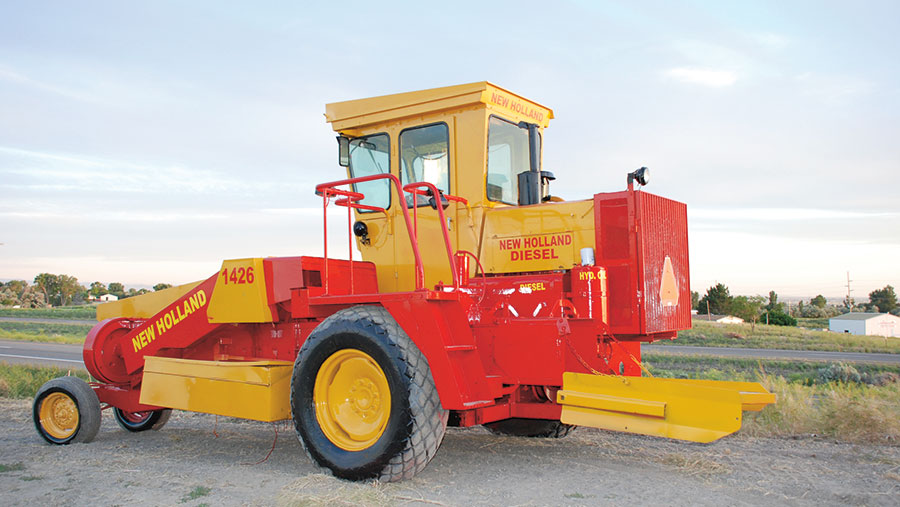 Freeman Oregon-based firm Freeman builds both small and large self-propelled square balers. The four-wheel drive 1592 is the largest machine with 375hp on tap. 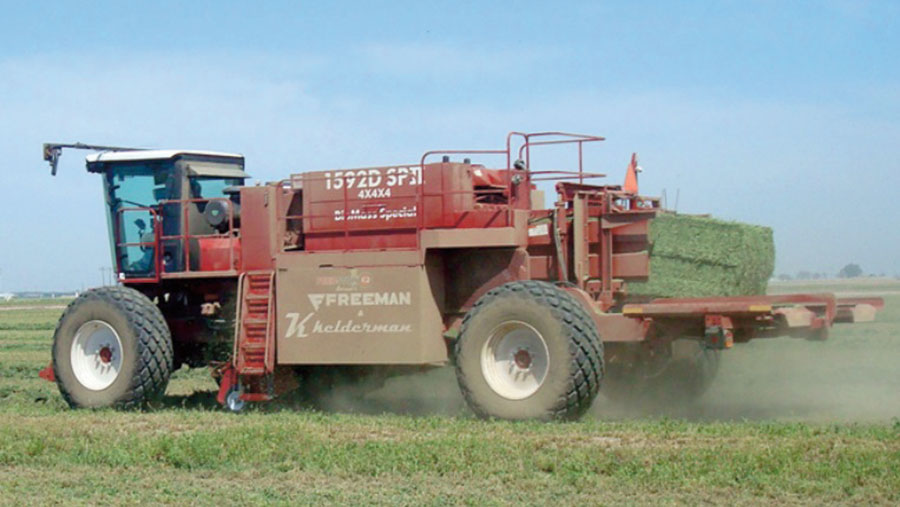 Deutz-Fahr Deutz-Fahr’s Powerpress 120H large self-propelled baler was based on a combine chassis. 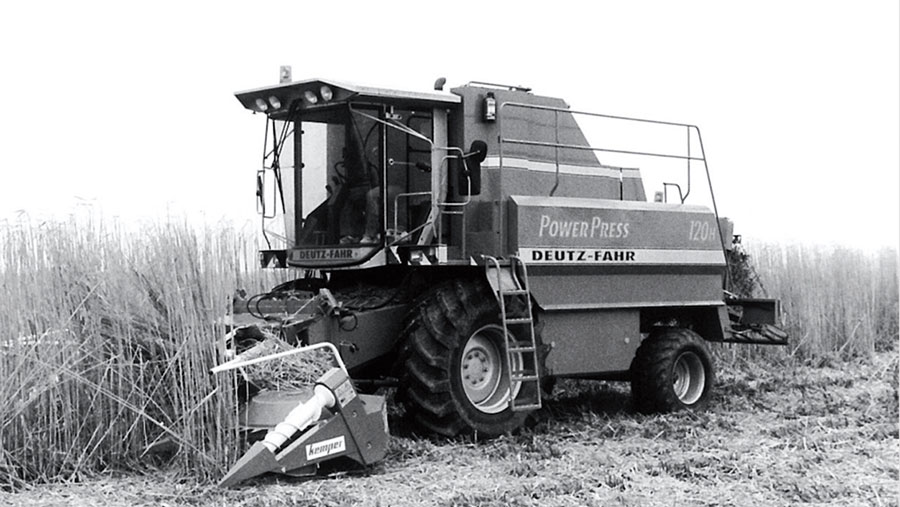