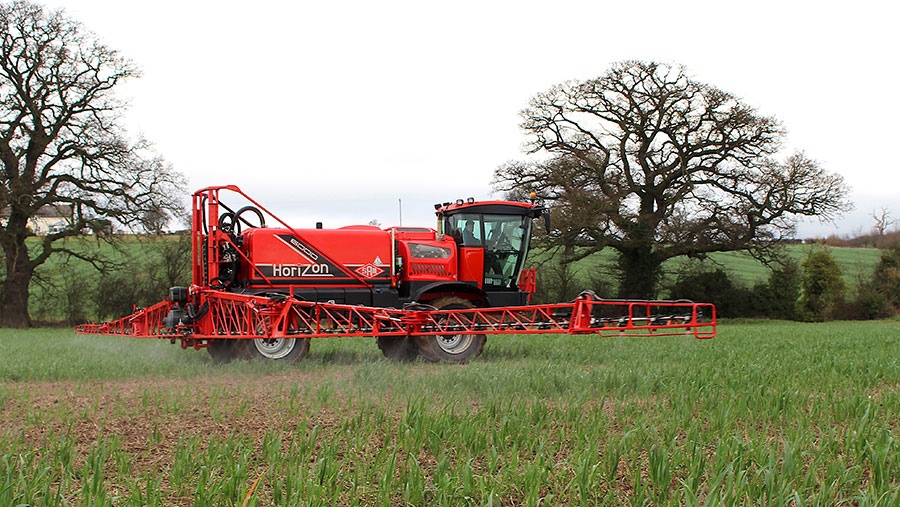 Some of the UK’s most serious sprayer operators are turning to pulse-width modulation (PWM) systems in a bid to improve accuracy and slash chemical costs, apparently unperturbed by its £25,000 price tag.

It was actually introduced about 20 years ago, and North American growers were quick to adopt the system in a bid to speed up work rates. To that end, estimates suggest 30% of all new sprayers sold in Canada are now fitted with it.

However, uptake in the UK has been much slower. Price has always been the main stumbling block; at about £25,000, it’s a wallet-draining extra on top of the initial sprayer outlay of up to £250,000.

Buyers also have to ditch one of the main weapons they have for limiting drift and maintaining spray quality – an air induction nozzle – as these don’t work with PWM kits.

With that in mind, the lack of early commitment from farmers has been no surprise. However, in the past few years, some of the big spraying manufacturers have been busy developing in-house kits or adopting well-known systems, and it has prompted a number of keen users to buy their own.

Once on farm, it seems the operators here can’t speak highly enough of the system.

A PWM system uses electrically actuated nozzles rather than a diaphragm valve to control the pressure and flow rate.

A conventional spray system is directly reliant on forward speed to increase pressure and thus control the overall flow rate. A PWM system has the ability to electrically change flow rates at individual nozzles.

This works by keeping the single-line system purged at a set pressure. The pressure stays the same, no matter at what rate the individual nozzle solenoids are opened and closed.

The upshot here is that spray quality, pattern and flow rate remain constant, regardless of speed.

The opening and closing of a nozzle is defined as the pulse, and the open (spraying) duration of the nozzle is known as the duty cycle, usually referred to as a percentage.

At 100% duty cycle, the solenoid valve is fully open and there are no pulses that interrupt the flow of liquid.

At any other percentage, pulses limit the amount of time the solenoid opens in relation to speed but, crucially, pressure remains where you set it. This also means that on and off switches are instant.

Being able to set and maintain pressure means operators can push on a little faster on good spraying days. Comparatively, in less-than-ideal conditions the pressure can be dropped back while speed is maintained.

There is also the option to increase rates for certain parts of the boom – for instance, when spraying weedy edges or greener tramlines.

Duty cycles are accurate to as low as 20%, with the spray quality maintained, but any lower and patterns and droplets may be disrupted. Variable-rate application is also made easier, as pressure is maintained, no matter how many nozzles are open.

One common catch with PWM is that air induction nozzles cannot be used. The mixing chamber for air and water fills with liquid on every pulse, resulting in liquid escaping from the air inlet holes.

“With an air induction nozzle, it is not always obvious how much air is being inducted, as this will depend on wear/humidity,” says Karl Rust at Sands Agricultural Machinery.

“With PWM, the pulse is constant, so the operator knows exactly what each nozzle is doing.”

In reality, pre-orifice nozzles are the way forward at the moment and there are plenty on the market suitable for PWM applications. There is a lack of recommended Lerap nozzles, but, when you find a sweet spot for a certain nozzle, it’s set and forget.

Most systems will work at between 10-30Hz, although Agrifac’s Strictspray Plus will run at 100Hz. The biggest factor here is the plunger wear, as the higher the frequency, the shorter its lifespan.

A key feature with PWM technology is the ability to limit incorrect application when sweeping around a headland bend.

“During a turn, the outside of the boom moves faster than the inside, resulting in under- and overapplication,” says Tom Wolf, a well-known independent application expert, based in Canada.

“A turn-compensated system can deliver extra flow to the outside, while reducing the flow towards the boom on the inside of the turn.”

However, Mr Wolf says there are limits, with the diameter of the object being negotiated – it needs to be roughly the width of the boom, or else the parity between the speed at each boom end will be too great.

At about 70% duty cycle, the system has enough range to cope with rate changes as the sprayer negotiates the bend.

Bateman, Chafer and Sands are all offering well-established PWM kits from the US and Canada. The best known is Capstan’s Pinpoint II, which is employed by Bateman and Sands. Chafer has opted for Raven’s Hawkeye HD.

Jonathan Hardy, northern sales manager for Bateman, says “the uptake of the system has been quite good, given the price” and believes it’s a no-brainer if it can be afforded.

He is clear, though, that an RTK correction signal is needed to make the most from the single-nozzle technology.

Agrifac’s Strictsprayplus and John Deere’s Exact Apply are both built in-house, while Househam and Amazone use their own electronic nozzle control system.

Elsewhere, Fendt hasn’t adopted PWM on its Rogators, while Horsch does offer PWM on its machines, but hasn’t actually sold any yet.

The firm’s Stephen Burcham believes the system limits the nozzle options and means users can’t keep their drift reduction nozzles such as Guardian Air, which is ultimately leading to the uptake being slow.

“The volume being metered into the nozzle is varying with the rate and speed, so the pressure at the nozzle tip is constantly changing, meaning droplet quality is altered and the efficacy of what is being applied changes.”

These issues are why Amazone only offers PWM on its AmaSpot spot-spraying system and not for headland speed changes. The company believes its AmaSelect electric nozzle control is a more practical alternative.

This system can switch nozzle sizes in relation to flow-rate changes to keep droplet sizes consistent.

“We’ve also introduced Swingstop acceleration sensors on the boom tips to monitor the speed and direction of every nozzle. This allows switching between bigger or smaller nozzles, depending on the boom’s speed,” says Mr Brown.

John Deere has taken its own route into the PWM world by introducing Exact Apply, which has been available in the US for more than two years, and has recently become an option here on the firm’s self-propelled machines.

It’s a slightly different system to a conventional PWM and offers the luxury of switching between two nozzles while spraying.

Central to this is a carrier that holds six nozzles, which are swivelled to work in pairs. Cleverly, the operator can choose which nozzle to use, depending on forward speed and the pattern required.

It has two solenoids at each nozzle that can split the flow of liquid into two streams.

Working in pairs, either one or both nozzles can be pulsed and offer a 15Hz frequency at each – so 30Hz overall.

The six nozzles are handy for those operators switching between different chemicals and fertiliser. A 36m boom with Exact Apply installed costs an extra £25,700.

Agrifac’s UK managing director, Andy Carse, says the firm launched its own system in 2017 and it has become more and more popular, to the point that a majority of new machines are now sold with the technology.

He remained tight-lipped on the cost, as it varies depending on boom size and spec, but says the initial outlay for the system “is a fraction of the savings it creates”.

He has feedback from customers reporting up to 4% savings on chemical and fertiliser, along with better weed control. 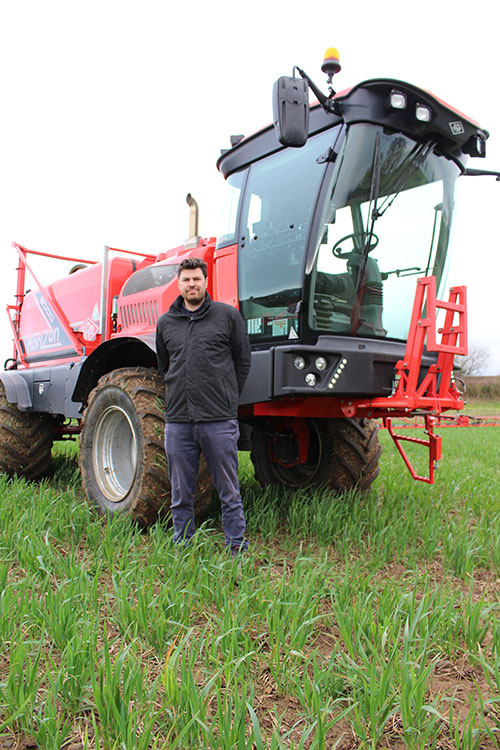 He had been a Bateman owner for a number of years, but the time came for a replacement and, after a few demos, he opted for a Sands fitted with a pulse-width modulation (PWM) kit.

“We farm a lot of small fields and I was noticing that headlands curves were regularly being burned or underdosed when turning.

“I felt that to be more environmentally friendly and put the product where it was needed, PWM was the answer,” says Mr Owen.

“Getting the correct nozzles has been a bit of a learning curve, as the flow range is so much greater.

“We tried a nozzle two sizes bigger than we previously used, but this didn’t offer a big enough range, so we dropped down to a smaller one.”

The farm has put 250 hours on the Horizon’s clock during a tricky autumn, and the early benefits of fixed pressure have apparently been handy when slowing down for rutted tramlines.

“When spraying up to poles or around trees, we can creep up to the obstacle while the nozzles reduce the rate accordingly and maintain the pattern.

“If the weather changes when we are spraying, the pressure can be wound down to 1.5bar to reduce drift, but the rate will be maintained.”

“The operator just has to keep an eye on the duty cycle range. The Capstan box also alerts the user to a blocked nozzle straight away, detailing the exact one. And single-nozzle control has reduced overlap on headlands, helping to save chemical.”

There is no doubt in Mr Owen’s mind that the system has improved the quality of applications across the farm.

“It’s not cheap, but putting the chemical and fertiliser in the right spots will ultimately lift yields. The system is built to take the variation in speed, which means it fits our farm pretty well.”