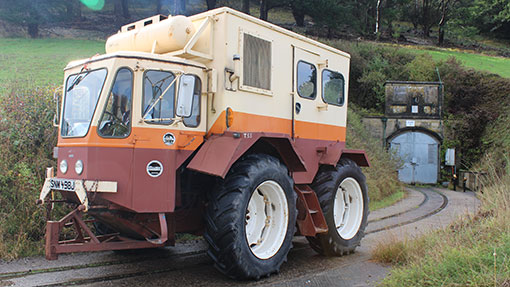 Silsoe’s curious-looking test machines were once at the cutting edge of agricultural progress. James Andrews visits a 1970’s example that’s currently up for grabs.

Wind back 40 years and the Bedfordshire village of Silsoe was the place to head if you wanted to catch a glimpse of the latest and greatest agricultural inventions.

Bizarre-looking apparatus could be seen hooked to fledgling machines, monitoring their performance and looking for precious improvements that would make them work that bit better.

The rise and fall of Silsoe

Now, the Silsoe Research Institute is an increasingly distant memory. After its closure in 2006, most of the equipment was sold, re-purposed or scrapped. So tracking down a good example is no mean feat.

But as luck would have it, one of the institute’s more impressive contraptions has just come up for sale.

The Single Wheel Tester was conceived in 1969 – by the then Institute of Agricultural Engineering – and was used for developing agricultural tyre technology throughout the 1970s.

Based on a Forward Control County 1164, it was fitted with a hydrostatic transmission from Lucas, had a control centre-cum-office bolted on the back, as well as an elaborate tyre-testing rig trailing at the rear.

It played a pivotal role in the development of radial tyres for agricultural machinery as well as studying the effects of tyre pressure on soils. It was later modified, getting a separate testing rig for rubber tracks, and it is thought it was last used in earnest in the late 1980s.

The rig used force transducers – devices that convert pressure into an electrical reading – to measure how well tyres gripped in different conditions. It also had a weight rack on top for testing the effect of different loading.

A key feature of the design was that tyres could be switched relatively quickly before the weather changed. And it was usually accompanied by a Ford 5000, complete with loader and A-frame to speed things up further.

At the time the system was cutting edge and tyre manufacturers across the globe looked to the results generated by this machine before putting their latest rubber offerings into production.

It also helped discover that dual wheels provided better grip than single tyres of the same total width – a fact that’s largely been forgotten as duals have fallen out of favour.

The County-based machine was not the institute’s first tyre tester, though. Previously it had a Case Farmall M, but rapidly increasing tractor size and horsepower meant something beefier was required.

The Single Wheel Tester was first sold in 2005. Silsoe Research Institute was set to close the following year and it held an auction to sell of its entire machinery fleet. At the time the engine was running, but the Lucas T100 transmission was not working.

The current owner, Richard Parry, had the transmission fixed, but the rest of it is as it was the day the last Silsoe employee clambered down the steps.

Up front there’s the usual angular County Forward Control cab. This looks pretty standard from the outside, but open the door and it is littered with switches, gauges and loops of cabling. There is also a crude desk, complete with charts for jotting down readings.

The hydrostatic transmission is controlled via a clunky slider on the left of the steering column and there is a bypass button on the dash. Knock this by accident and it won’t go anywhere, as we discovered.

The rear cabin is the control centre for the testing rigs and houses the retro computing equipment along with plenty more dials. There is a lone chair mounted in the centre, a desk and a few drawers full of odds and ends.

It is hard to put a value on such an individual piece of equipment. It comes complete with all parts and components, but needs a healthy dollop of TLC to get it back to its former glory.

Mr Parry is asking for prospective customers to get in touch to negotiate a sale. For details of the sale visit Farmers Classifieds.