About to change the tyres on a trailer or other trailed equipment? It could make sense to go radial. Peter Hill explains why.

Remoulded truck tyres and purpose-built crossplies were once the standard fitment on agricultural trailers, spreaders, tankers and forage wagons. But increasingly it’s more sophisticated radials that are being fitted to towed equipment.

Operators have come to realise that investing in advanced low-profile radial tyres for such machinery helps protect the soil structure as the weight of loads hauled grows bigger. It also means faster workrates and lower fuel use. 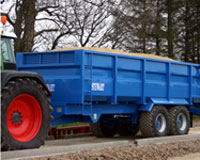 Generous width and a strong-but-supple carcass that can be run at modest inflation pressures for the load enable advanced trailer radials like the Michelin Cargo X Bib fitted to this Stewart trailer provide low rolling resistance and ground pressure.

Michelin Cargo X Bib
With a carcass capable of operating at just 1bar pressure but with sufficient strength to handle heavy loads at up to 4 bar, Michelin’s Cargo X Bib radial set new standards for trailer tyre performance and durability when it was introduced.

Rated for speeds up to 65kph, it is claimed to have low rolling resistance and good self-cleaning properties thanks to the flexibility of the radial carcass and the directional chevron design of the tread, which flares at the shoulder to remove soil between the tread blocks. Fully loaded, the tyre’s contact area widens as the shoulders take on a load-bearing role.

Including the new 710/45R22.5, there are 10 sizes in the range. The most popular in Britain, says distributor Nordic Tyres is the 560/45R22.5 suitable for tandem axle trailers with up to 16t load capacity.

This is a direct replacement for the 385/65R22.5 ‘Super Single’ remould truck tyres, which have big load capacity but an inflexible carcase that does not give the same flotation properties. 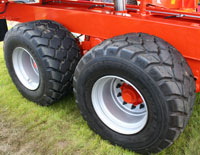 The Flotation A390 is a relative newcomer to the Alliance range, available from distributor Kirkby Tyres. It is rated for use at up to 65kph or 70kph, depending on size.

The tyre’s block tread pattern is designed for grip and effective self-cleaning, the flat profile aiming to put as much rubber on the ground as possible, while the rounded shoulders should minimise scuffing. The carcass is steel braced for puncture resistance and stability at high speeds.

The new Flotation A388 from Alliance Tires is designed for heavy duty applications on trailers, spreaders, tankers and silage wagons. The unusual curved tread pattern is dense at the centre where the bars overlap for good hard surface performance during transport and relatively wide-spaced beyond for rolling grip in muddy conditions and good self-cleaning.

A flat carcass profile and low inflation pressures should ensure the maximum contact patch to protect soil structure. Once fully rolled out, the A388 series will have seven sizes for 22.5in, 26.5in and 34in rims.

Dutch manufacturer Bandenmarkt specialises in re-tread tyres for agricultural trailers. The Kargo-Radial design comes in five sizes from 22.5in rims – from 300/55R22.5 to the 20.5R22.5 pictured, which is 40kph rated maximum, carrying 6500kg at 4.5bar inflation pressure. The same pattern is available for 23in rims up to 600/65R23. 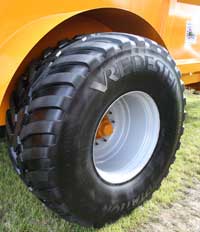 Rated for up to 65kph, the tread pattern has a near-continuous rib down the centre for hard surface stability and reduced rolling resistance, and open ribs at the shoulders for lateral grip.

While the relatively shallow and smooth profiled tread pattern of the Vredestein Flotation Pro  marks it out as a tyre biased toward grassland use, the deeper, more aggressive tread of the Flotation+ design  should give the tyre more lateral grip and rolling traction in a muddy potato field. Both are radial flotation tyres but while the Flotation+ is limited to 40kph and six sizes for 22.5in rims, the Pro is built for road speeds up to 65kph and comes in 12 sizes from 560/45R22.5 to 710/40R22.5 and three sizes up to 800/45 for 26.5in rims.

Trelleborg Wheel Systems has expanded the Twin Radial tyre range for trailers, spreaders and tankers with the 710/50R26.5, which takes the sizes available in this series to nine – three for 22.5in rims from 500/60 to 580/65; three for 26.5in rims from 600/55 to the new 710/50; and three for 30.5in rims at 650/65 to 850/50. All are rated to operate at up to 65kph, with inflation pressure recommendations starting at just 0.8 bar. At this pressure, the 560/60R22.5 size will handle 2240kg with a limit of 40kph, climbing to a load of 2690kg at 4 bar. The Twin Radial is Trelleborg’s first radial construction trailer/implement tyre. It has a semi-bar tread pattern for rolling grip and self-cleaning but with extended blocks down the centre to provide a near-continuous rib for lateral stability and effective road-going performance.