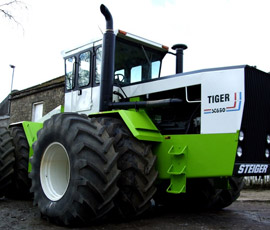 If you’re looking for a second-hand tractor that’s a bit rare, has bags of horsepower and doesn’t cost too much, this one could be the answer.

It’s a Steiger Tiger III ST650 and it’s a true muscle machine. A 19 litre Cummins straight-six engine provides 705hp and a barn-storming 3,157Nm of torque, though the engine will be detuned to 650hp before it goes on sale.

All that power goes through a six-speed Allison powershift gearbox with torque converter. There’s so much power and torque there, you won’t need to change gear very often.

In fact it’s reckoned to be one of only two Tiger IIIs in Europe. All the rest went to North America or Australia.

It’s a well-travelled tractor, too. Its first owner was the Kirovitz tractor company in the USSR, which wanted to evaluate the tractor before taking on a licence from Steiger to manufacture it there. However Steiger couldn’t get the US government to give it an export licence for the engine, axles and gearbox, so the deal failed and the tractor sat on a state farm for 21 years totting up just 160 working hours doing evaluations.

In 2000 it was bought by an Estonian company who ran it for another 880 hours. After that it went to a Finnish collector and languished in a wood before being bought in 2004 by North Yorkshire farmer and Steiger tractor specialist John Nicholson.

He has been using it on his own farm to pull a 9m Kverneland cultivator with 31 ultra-rugged 40mm pigtail tines at 9in depth. However, he has recently reduced his acreage, so the Tiger is a bit surplus to requirements.

The tractor has now been completely refurbished, says Mr Nicholson, with new twin Michelin 710/75 R34 tyres and a top-of-the-range Grammer seat. There’s virtually no wear in the tractor’s mechanicals, he adds.

Pricing an unusual tractor like this is difficult, but Mr Nicholson reckons it will sell for £70-75,000. That’s cheap horsepower compared to the cost of a new artic-steer tractor like a Case Quadtrac 600, he points out, and the engine, gearbox and mechanicals on this sort of tractor are generally expected to go for 20,000 hours before they need a rebuild. He can be contacted at www.amtrac.co.uk