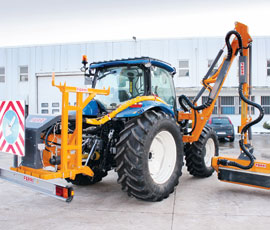 Veteran hedge-and-verge machinery manufacturer Ferri has announced it is widening its implement range to include several heavy-duty forestry-related mulchers.

Competition is fierce in the vegetation maintenance sector, with Britain’s Alamo group – including Bomford, McConnell, Spearhead and Twose – dominating the UK and European markets.

Based in Tamara, northern Italy, Ferri began life as a blacksmiths in a garage neighbouring the present-day factory. The company – which is older than the Italian Republic it’s based in – has grown to become a worldwide brand that is exported as far as North America and Japan.

The Ferri range has been imported into the UK by Cambridgeshire firm Reco for the past 14 years. As with almost all imported machinery, prices are at the mercy of fluctuating exchange rates. Several years ago, a new Ferri hedgecutter could be bought for the same price as a second-hand McConnel machine, but current exchange rates mean that European manufacturers such as Ferri have had to cut their profit margins to keep selling prices competitive.

Worldwide sales average 1,200 units a year across 40 export countries, although the UK makes up only 4.5% of production, the company says. In comparison, the Alamo group is reckoned to sell about 850 units in the UK alone.

Having manufactured boom mowers for 30 years, the company has built up a range of machines with horsepower requirements ranging from 20hp to 180hp.

At the top end of that bracket, the TSG610Z arrived in the UK last year and was the latest hedgecutter to be added to the range. Up to six of these units can be pumped out of the factory every day, and it comes with some high-spec features.

An extendable boom and reversible motor join the increasingly common parallel linkage set-up. One aspect of machine design that is particularly important to Ferri is its philosophy of minimising weight on all machines. This can mean rival hedgecutters can be up to several hundred kg heavier than Ferri models, according to the company, however the use of cast iron components ensures that it’s robust enough for heavy use too.

There are also load-sensing options which ensure there is no decrease in power and speed even when up to four rams are being operated at the same time in tough conditions. Reco sells the TSG for £25,950.

The company also offers a mid-mounted range of hedgecutters and various offset mowers, shredders and mulchers, including a cranked-arm design which allows the machine to be operated close to the hedge and on narrow lanes.