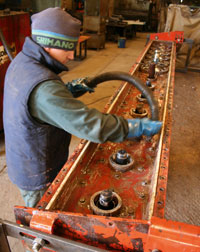 When you know what you’re doing, refurbishing a piece of equipment can breathe new life into kit otherwise destined for the scrap metal dealer.

Some of the equipment looking as good as new on the LAMMA exhibition showground will already have clocked up a hefty number of hours of use.

It will be displayed by a special breed of agricultural engineer who doesn’t believe in throwing things away when they appear to have come to the end of their useful working life. And buyers looking for a bargain would do well to take note.

Philip Davidson says he’s built a nice business over the past nine years refurbishing the front-end of telescopic handlers, as well as overhauling the odd axle mounting and boom. The LAMMA show is his principal shop window.

“I used to sell telehandlers when I worked for a dealer and often saw machines being replaced because the implement carriage couldn’t take any more punishment,” he says. “Now, my days are spent giving these machines a new lease of life with a carriage that in many ways is better than new.”

The problem is simply that repeated tipping and crowding a bucket full of beet, a fork laden with silage and a grab grappling with muck takes its toll. Pins wear and bushes go egg-shaped – and as the amount of free-play increases, so the process accelerates, making the handler unsafe. 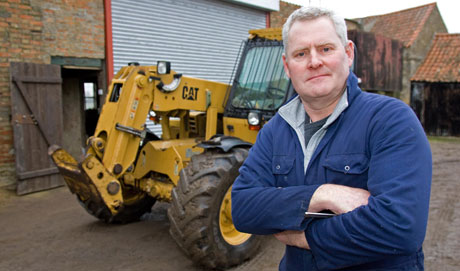 But Mr Davidson reckons a thorough refurbishment will have the front-end working a treat in a week or so and at a cost that makes it economical to put off buying a replacement handler for a while.

Operating from his home at Scothern, south Lincolnshire, most of the work is done on-site and in specialist machining shops.

“Every case is a bit different so it’s not just a fitting job,” he emphasises. “There’s real engineering involved in getting it right.”

The main task is to get everything squared up, so the carriage is stripped down and the components taken to a machine shop with an inline borer that re-drills the pin housings.

“We then fit a sleeve to take the bore back down to the original pin size and make up our own pins from round bar with the required size head welded in place,” says Mr Davidson. “When all the components are re-worked or made from scratch, it’s back to the farm to reassemble the carriage on the handler.”

Using good quality materials and doing the job right means the machine’s front end should cope with a few more years’ hard treatment for a typical cost of about £1700.

Anyone taking a look at the power harrows and seed drills on Andrew Guest’s LAMMA stand would be hard-pressed to tell they already have several hundred hours or more work under their belts.

His “half used, half new” implements are built up from thoroughly refurbished Kuhn power harrows and Accord drills that get new wearing parts, additional fixtures and fittings and a fresh coat of paint ready for a second dose of toil.

Some of the harrows go out alone, but more often with a drill mounted piggy-back over the gear trough, creating a one-pass combination that accounts for about three-quarters of the 150 or so machines completed each year in Mr Guest’s workshops at Cotham near Newark, Nottinghamshire.

“Anyone can pick up a second-hand power harrow from a dealer’s yard or farm sale, but would they know what it’s like inside and whether it’s likely to give trouble?” he asks. “With our refurbished implements, all the critical wearing parts are replaced as a matter of course then they’re brought up to date with modern guards and given a coat of paint that will see them good for another 10 or more years of work.” 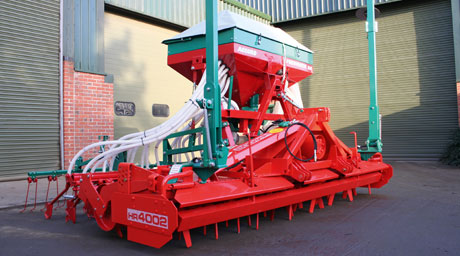 Having got into the machinery repair business, often taking in power harrows for remedial treatment, Mr Guest says his first look inside a Kuhn harrow was a revelation.

“They got it right first time it’s very strong and well built,” he says.

Similarly, he rates the Accord drill for its accuracy and simplicity. Putting the two implements together makes an ideal combination unit for final seed-bed preparation and sowing in one pass, he reckons.

The harrows are stripped and have their gear troughs vacuumed and washed clean to remove any shards of metal. Gears are usually reused because they are unlikely to be worn unless a bearing has broken up, but the taper roller bearings and seals are replaced as a matter of course.

In contrast, not much remains of an Accord drill once its 500 or so individual parts have been stripped down and sorted.

“We keep the hopper, toolbar and coulter arms, disc markers and fan internals but the rest is discarded,” says Andy Guest. “Each coulter is fitted with a new ‘cheeks’ assembly behind the point, a new anti-blocking flap and pivot bushes. Then we weld up a stronger hopper frame and fit our own hopper extension, flexible cover and access steps.”

All reused components are shot blasted to leave a pristine surface for painting in the new powder coat facility at his works. Seed hoses, Accord seed metering unit and fan housing are all new and the coulter bar is built up with new spring tension plates and springs.

Andy Guest acknowledges that it would be wrong to say his refurbished power harrows are as good as new, but they come pretty close and at competitive prices, too. A 3m power harrow sells for £4500, a 4m at £5500 while a harrow and drill combination is priced at £9200 and £11,200 in these two sizes.