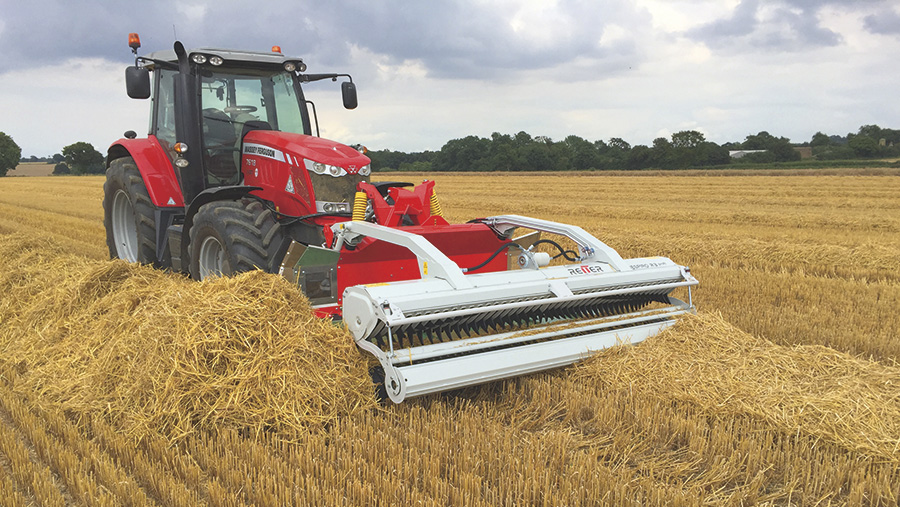 Combines get bigger, swaths get thicker and Augusts seem to get wetter, so having a merger tucked in the machinery shed can make a world of difference when it comes to drying out damp straw rows.

The UK merger market has been dominated by the likes of Kuhn and ROC in recent years, but Austrian company Reiter Innovative Technology hopes to ruffle a few feathers after agreeing an import deal with Suffolk Farm Machinery.

Its version aims to minimise the time the big baler is either parked up or blocked up due to soggy swaths.

It might be more expensive than a run-of-the-mill rake, but lifting the crop minimises the chance of soil and stone contamination that can cause problems with cows’ insides further down the line.

Less bruising also means less nutrient loss, Reiter says, and because the swath ends up fluffier it is apparently easier for both balers and foragers to process.

The first model to hit the market is the 3m front-mounted Respiro, which can throw the crop to the right or left and is powered by a modest hydraulic flow of 30-60-litres/min.

The compact machine has a 700mm belt and stepless speed variation, while the full-fat version is 1,000mm and is the model earmarked for the UK.

A small, 300mm diameter pick-up reel allows the table to run just 200mm from the deck, which the company hopes will make it more effective in lighter crops.

It also compares favourably with rival machines, says Reiter, where the pick-ups are 660mm and the table height sits at 450mm.

The contour-following pick-up centre shaft and four rotating skids claim to provide more precise control of tine distance to the ground and should avoid contaminating the crop with too much soil.

Meanwhile, the camless pick-up is fitted with a single-spanner tine mounting system and maximum working speeds are up to 20kph thanks to a Pöttinger-derived fully-suspended headstock.