Having brought us GreenStar satellite guidance and AutoTrac automated steering, John Deere now has a new toy in its collection – iTEC Pro. Simply put, it is an integration of the company’s Implement Management System (IMS) and AutoTrac.

In practice it means the tractor will steer itself through headland turns as well as controlling the implement automatically. A few years ago when GPS-assisted farming was in its infancy, technophobes murmured and worried about the implications of a “driverless tractor”.

The technology for that has been available for a while, but cost and safety have kept it from becoming a commercial reality. Deere – and indeed other manufacturers – has offered automated headland packages for a number of years which allow operators to replay a pre-programmed series of operations such as disengaging the pto and operating a spool valve or two.

Some systems are more sophisticated than others, but none has yet managed to integrate automatic GPS control. Until now.

Deere’s iTEC Pro (Intelligent Total Equipment Control) will initially be available on high-horsepower 8030-series tractors from November and will be rolled out across the firm’s full range over the next two years.

iTEC Pro effectively automates the entire headland operation – slowing forward speed, disengaging diff lock, lifting implement, etc – as well as steering the tractor into the next bout. Before this can happen, the driver needs to map the field boundary, which is simply done by activating the recording function on the GreenStar terminal and driving around the boundary of the field.

The operator also needs to input details of any obstructions such as ponds or poles and determine whether these are passableor impassable. Now, the idea of passable obstructions may sound like a contradiction, but in the case of a pond or a badger sett, a wide sprayer boom can pass over such obstacles. But the respective nozzles need to be turned off, although there is no need to steer around them, keeping the bout straight.

The boundary can be saved to memory and named, allowing the user to recall the data again for subsequent tasks relating to that field. Naming and recording these data works in favour of contractors in particular, as the operator can give the job the customer’s name plus record data such as area covered and application rate. This all helps to strengthen traceability, something Deere says we will be expected to comply with more in the near future, especially where spraying is concerned.

The second process in setting up iTEC Pro is defining dimensions for the tractor and implement. Mainly this sets the minimum turning radius, which is applicable especially when working with trailed implements, avoiding the rear wheel coming into contact with the drawbar. Details can also be saved for specific implements, which again avoids the need to re-enter details on numerous occasions.

Stage three of iTEC Pro is setting up the tractor and implement commands for the headland. This is all done sitting stationary on the headland and is based on distance from the virtual boundary that was set in stage one. Should the operator prefer to program the headland functions in the normal way – recording the implement functions while in motion on the first run – that is also possible.

But in reality it is much easier sitting stationary to input the commands and means you are not grappling with two or three switches at once. With programming complete, the tractor is ready to set off, in this case paired up with a Kuhn power-harrow drill and front-mounted tank.

We set up the unit to engage as the drill’s metering wheel hit the virtual field boundary. At this point the link-arms lower the implement into work and the pto engages, done on the first run manually. AutoTrac is in charge of the steering and the machine’s target speed is set.

Trundling down the field, it all seems strange not to be in control of anything, not even the steering wheel, which is folded up out of the way. But what feels really unnatural is when we reach the end of a bout. The controller simply asks which way it should turn.

Confirming that we are to venture right, the tractor veers sharply to the left and then starts to head back right – it does all this while lifting the front-mounted seed-hopper and metering wheel, disengaging the pto and raising the rear lift arms. 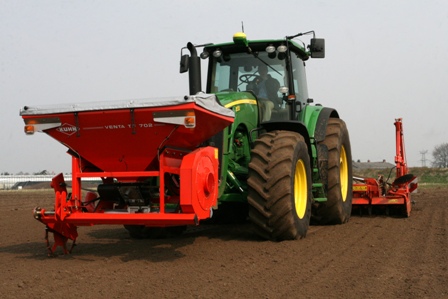