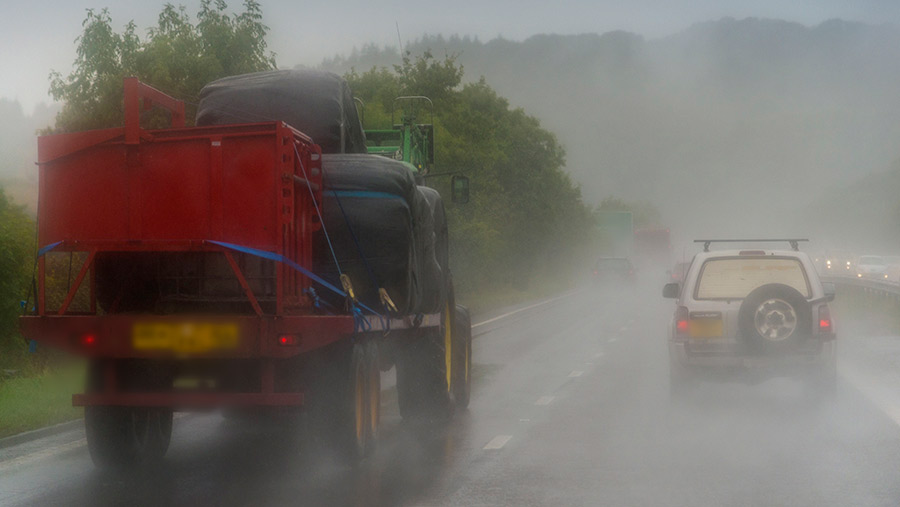 The first in a series of workshops outlining potential changes in the law governing the use of agricultural vehicles on the road took place last week at New Holland’s Basildon headquarters.

Organised by the National Association of Agricultural Contractors (NAAC), the event was attended by representatives from the Department for Transport (DfT) and the police as well as experts in the field of transport legislation.

Two years ago, the legislation regarding tractor weights and speeds was revised, stretching gross train weights to 31t and maximum speeds to 25mph.

At the time of the change, DfT outlined it as phase 1, with a further round of weight increases to come, so what’s happening with this second phase?

The department’s spokesman at the NAAC event said it looks likely this will now be delayed due to the complications of Brexit and a change of ministers.

Although he would not be drawn on a timescale, he was clear that any proposed changes would follow the same format as before, with an eight-week consultation period preceding any change in the law to give interested parties the chance to have their say.

The ability to carry extra weight (possibly up to 39t) could be linked to some form of voluntary road-worthiness testing and a potential revision in driver licensing.

Operators of tractors running at higher weights may be subject to age restrictions and may have to obtain additional licences.

Other areas under review

The DfT representative also outlined other areas for potential review, including a change of type approval legislation for tractor braking performance.

From January 2018, it looks likely any new tractors hitting UK roads will have to have stopping powers much closer to those of HGVs.

More pressingly, from the middle of this year it is likely that fast tractors used in non-ag commercial haulage will have to undergo annual roadworthiness testing and will probably be accompanied by a 15-mile travel limit. Farm tractors fall into a different tax category and so will remain exempt from any such scheme.

A review of tractor driver licensing was also put up for debate by the police and there was overall agreement that the current scheme allowing anyone with a car licence to get behind the wheel of a tractor was not fit for purpose.

Additional licence categories for heavier, higher-speed tractors and the possibility of an age restriction were put forward as options.

Aside from this a number of questions on other issues were put to the experts:

If we want to travel at 40kph, we gather there are restrictions. What are they?

The 40kph (24.85mph) limit only applies to vehicles under 2.55m in width. Anything wider than this is still restricted to 32kph (20mph), which means many modern tractors shod on decent rubber will exceed the width limitation.

The second point to note is that the higher speed rating only applies to a bare tractor or when a trailer is hitched up. Trailed appliances (implements), whatever the width and even when fitted with proper brakes, mean the 32kph limit still applies.

We want to carry more load, but gather that’s not possible?

Although the gross train weight was increased to 31t in the March 2015 law change, the trailer itself is still limited to a maximum weight of 18.29t. Effectively it just means bigger tractors can be used to tow the load, making for safer stopping.

What is defined as a ‘fast tractor’ and what speed can it travel at?

An agricultural vehicle with full suspension on all four wheels, fail-safe steering system and two-line air-operated ABS anchors with a 50% minimum braking efficiency is classified as a “fast tractor”.

The speed it can travel at depends on what is on the back. With a high-speed rated trailer fitted with suspension, 50% efficiency brakes and ABS, a “fast tractor” can travel at up to 64kph (40mph) as long as it doesn’t exceed 2.55m in width.

However, with an implement hitched on that is wider than 2.55m, it will be restricted to 32kph.

Are there restrictions on how far you can haul agricultural produce off the field?

HMRC does allow farmers and those working on a farm to take produce from the field for processing using red diesel (for example, to a beet factory, AD plant or a mill), but this transport must be incidental to the agricultural operation performed on the land – so not just haulage.

However, if the job would require an operator’s licence (in other words, moving produce more than 15 miles from the farm), HMRC may consider it not incidental to the agricultural operation and therefore it requires white diesel.

Transportation of agricultural produce by a contractor employed solely for that purpose with a tractor and trailer must be done using white diesel and further road haulage restrictions will apply.

If the crop is being transported from a temporary store – not off the field – HMRC will consider this as haulage.

If transporting crops off the field back to the farm, there are no distance restrictions.