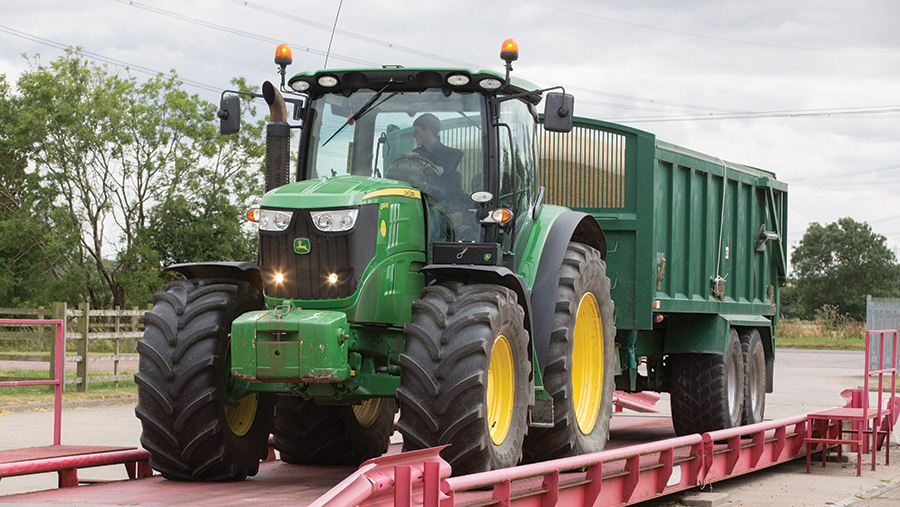 The long-running process to increase trailer weights might be frustrating large contractors and farmers, but the latest round of talks have taken the industry one step closer to heavier load limits.

Just over a year ago, a new set of legal amendments were announced that let those involved in agriculture run at higher tractor trailer weights.

The change saw the combined weight of a tractor and single trailed climb from 24.39t to 31t, but the maximum laden weight of trailers remained unchanged at 18.29t.

This initial increase in gross train weight was important – it allowed bigger tractors, up to 6.61t heavier, to pull laden trailers more safely.

However, it has done little for those looking to upgrade their kit or needing to legally use bigger, heavier trailers.

Since then the Department for Transport (DfT) has continued to speak with industry organisations including the National Association of Agricultural Contractors (NAAC), NFU, AEA and Bagma on the second phase of negotiations.

Significant progress has been made and it is expected that a wider industry consultation will take place later in the year.

While this may seem an incredibly slow process to those waiting on results, final weights are tantalisingly close.

Important and costly decisions should then become clearer for those holding on to make buying decisions upgrading their trailers.

In the meantime, current legislation still stands with the maximum combined weight of a tractor and single trailer remaining at 31t.

No additional testing is required for either the operator or vehicle to go to the higher weight, although it is still a legal requirement that the vehicle is roadworthy at all times.

Under the Provision and Use of Work Equipment Regulations any machinery used at work must still be properly repaired and in working order.

If tractors and trailers are driven on public roads, they must also comply with the Construction and Use Regulations 1986 and The Road Traffic Act.

If stopped, any defects found would leave the driver and owner liable for prosecution by road traffic law enforcement agencies or the police.

In the future, and if the industry wants to go over the 18.29t threshold, farmers and contractors will most likely need to show that their vehicles are safe and can stop efficiently on the roads.

It has been more than 29 years since this legislation was last reviewed and, during that time, the industry has changed beyond recognition.

Horsepower and capacity of machinery have both increased, and as foragers and combines have got bigger, the haulage sector has been forced to keep pace.

Trailers over 18.29t are already on the market, yet their owners are legally unable to use them to full capacity.

A survey by the NAAC in 2015 showed that almost 60% of respondents had tractor trailer combinations that, if fully laden, would weigh more than 31t and there’s no disputing the need for an update to bring the law closer to the reality of the market.

One hurdle that could prove awkward is the public and industry opinion on young drivers in large tractors and trailers.

The changes to weights in 2015 did not incur any changes to the age and training of drivers, allowing anyone over 17 with a category F (tractor) or B (car licence) to drive to the 31t limit, with the exception of tracked vehicles.

Any future weight increases move tractors and trailers into weights closer to HGVs but without a similar licensing regime.

Another bone of contention may be the question of whether tractors and trailers are being used for haulage.

Farmers and contractors can use tractors for moving produce as part of the agricultural operation, within limitations for operators’ licencing, but haulage operations take the operator outside the field of many agricultural exemptions.

This means the tractor can no longer be classed as an agricultural vehicle and operators’ licencing, driver’s hours and white diesel come firmly into play.