Grimme’s latest field loader, which costs £250,000, demonstrates that technology continues to advance in even the more mundane areas of vegetable harvesting, including moving carrots, potatoes or parsnips from a trailer into an articulated lorry.

The Clean Loader is built from a number of standard Grimme units – a hopper, grading table and elevator – and provides an intake width of 2.4m and an overall bunker floor length of 6m. The trick is to make them all work together in tough UK conditions. 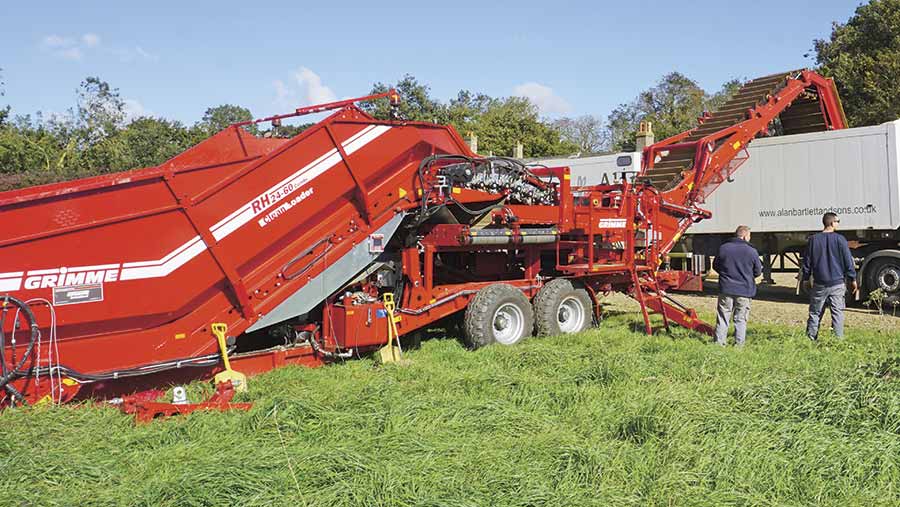 Trials kicked off last year in the UK with Lancs-based group Hunterpac and, after a hard season under its belt, Grimme decided to strengthen the chassis and increase the size of the fuel tank.

Now in its first full year of production, the company has sold 10 machines across Europe, including two to Alan Bartlett & Sons in Chatteris, Cambridgeshire.

Oliver Bartlett, son of founder Alan Bartlett, decided it was worth the investment.

“We previously had a machine for 15 years or so and it had become a dinosaur. It was top-heavy, difficult to manoeuvre and was becoming increasingly unreliable. We harvest 24 hours a day, 11 months of the year so reliability is crucial for us.

“The capacity of the RH24-60 is almost double that of its predecessor, which makes a big difference in output, too.” 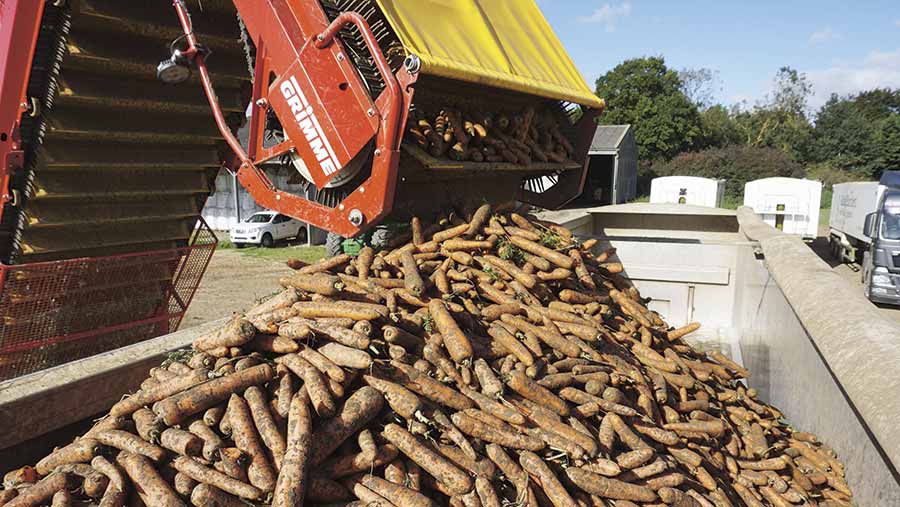 Tractor and trailer combinations reverse up to the 19cu m intake hopper, which has an infrared light beam across the front. When the beam is broken by the trailer, it engages a set of lights to signal to the tractor driver to stop.

The very front of the hopper is flat before rising up; the flat section, claims Grimme, ensures that carrots are not crushed between the trailer unloading and the angled elevator.

A clever load-sensing mechanism automatically adjusts the speed of the elevator carrying the crop onto the cleaning rollers, so as it empties it speeds up and a sudden intake of bunched crop will cause it to slow down.

A bank of 16 rollers carries out the cleaning. The angle of pitch can be adjusted to provide a stronger or weaker cleaning effect, while also altering the distance between the rollers.

Grading rollers 1, 3, 5 and 7 can be run at different speeds from 2, 4, 6 and 8, which increases cleaning performance. The loader is powered by a Hatz 45Kw air-cooled engine that is totally enclosed to protect it from dust. 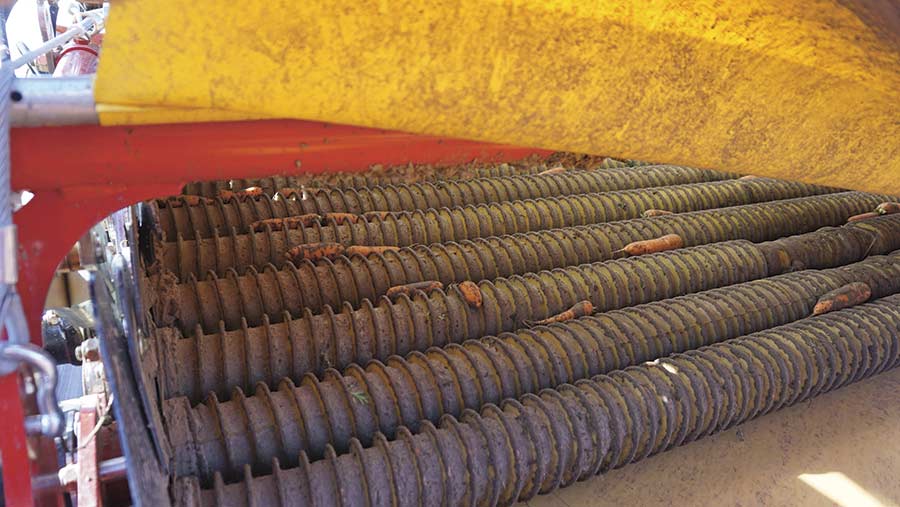 “We are now filling a bulker in about 25 minutes which is twice the rate of the previous machine,” says field manager David Gilmour.

“The swivelling elevator means we only have to move the truck forward once and the machine is much better designed for safety and access. You also get a much better view of the whole operation.”

The Clean Loader performs an automatic cleaning routine, the frequency of which can be pre-programmed. It can reach up to 6.5m high and the elevator swivels 25deg either side.

On-road capability is almost as important as in field because the group grows carrots across the whole of East Anglia and into Shropshire and Scotland.

The RH24-60 is equipped with air brakes, folds up to less than 3m wide and can be quickly set up in around 15mins. Bartlett’s engineering team is also busy making a modification to fit fold-down ramps that are attached to the machine that guide the trailers to the edge of the bunker. For the longer journeys to Shropshire and Scotland it is put onto a low loader.

It’s not a cheap investment, either – it costs £250,000 and is another illustration of the fact that growers will pay serious money for specialist machinery that solves logistics problems in agriculture.

Grimme UK vegetable expert Ed Hodson says that, to justify the huge prices, the company is increasingly having to tailor machines to growers needs.

“Grimme has a reputation for building high-quality machines that are somewhat inflexible. At our base in Lincs we now employ two designers and three fabricators to adapt machines to the needs of the UK market.”

Elevators are one way of loading trucks but reverse tip trailers are another good way of shifting large quantities of material quickly.

Two years ago, machinery dealer Pecks introduced Dezeure trailers at the Lamma show in Peterborough. Their stand-out feature was the turbo cleaner positioned on the end of the body, which cleans root crops before they fall into a bulker.

It is perhaps not surprising that a trailer costing £140,000 has taken time to find a home but one of the UK’s largest beetroot growers – Greens of Soham, Cambridgeshire – has just bought two.

They come with an impressive spec that includes MAN military-grade axles that should cope with anything that the Fens can throw at them. These axles are powered via a power take-off from the tractor to a hydraulic pump on the trailer, which according to the maker could propel the trailer through a barn door.

Rear axle steering, air brakes, a full lighting package, cameras and a dirt box to catch the tare from the crops are also included, while the standard tyres are 710R 60s. 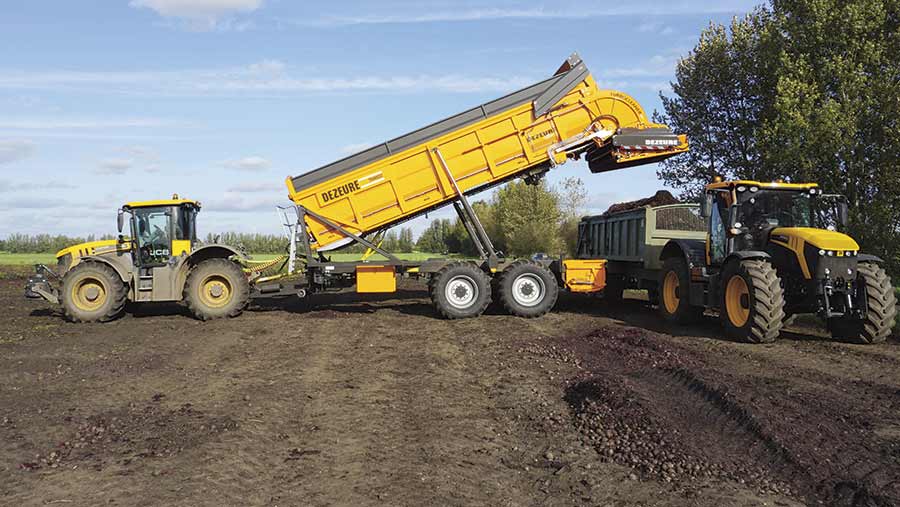 The cleaning unit comprises 12 rollers grouped in twos, and it’s possible to alter the speed of the rollers and the spacing between them. In total, it takes around 10 minutes to unload, depending on the degree of cleaning required.

As with other highly specialised machines, a straight comparison with a standard trailer does not yield the answer to the question “How can you afford it?”.

The answer is that the two trailers will replace standard trailers and a complicated loading elevator set-up. On the road, trucks will replace tractors and trailers. To date, Dezeure has sold 50 of the machines in Europe, suggesting that growers are able to see beyond the considerable upfront price.

Features of the Dezeure transfer trailer