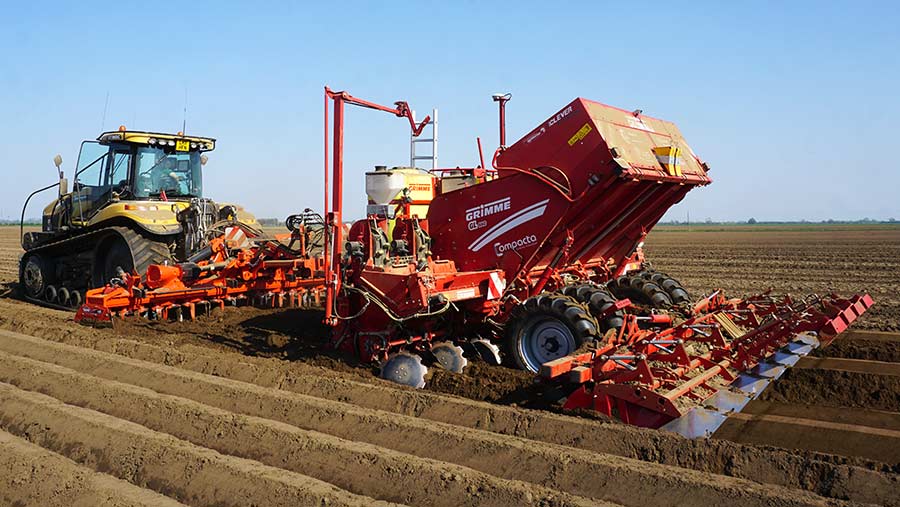 Controlled traffic farming may be an established way of managing compaction caused by heavy machinery on combinable crop fields, but finding a way to adapt it to work on potato ground has perplexed growers – until now.

The system has been developed by PX Farms managing director James Peck, who already runs a 12m controlled-traffic system to improve yields and work efficiencies across 3,440ha of sugar beet and combinable crop land.

For his potato ground, he decided to run cultivations and planting across 6m widths, with spraying at 36m and harvesting at 3m.

At the heart of his set-up is a 75cm-row system in the potato crops – a popular choice globally, but one that tends to be less favoured in the UK, where 90cm arrangements dominate.

This change meant he could plan his work in 3m sections and, according to his trials and research, the tighter rows cause no loss of yield or reduced crop quality. 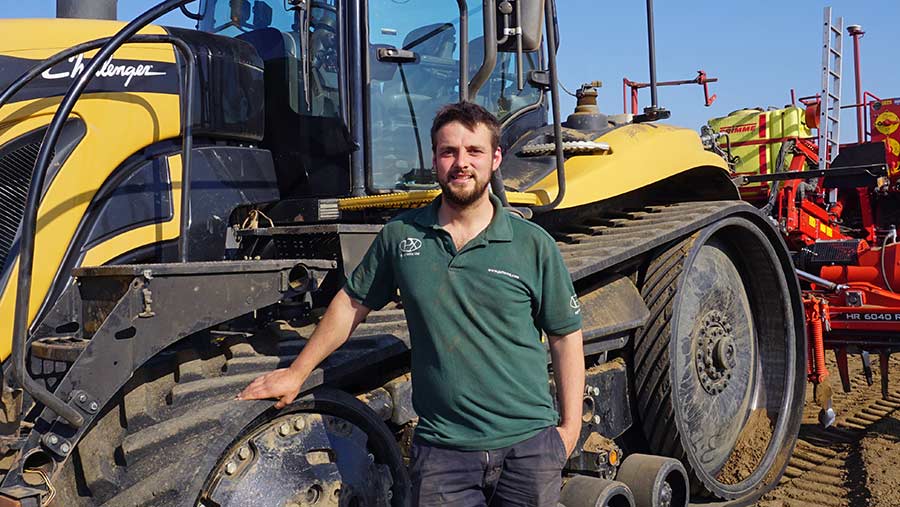 Mr Peck set about assembling his rig with support from Cambridgeshire dealer Chandlers, along with experts from Grimme and Standen, who helped field test all of the modifications.

The groundworks in his new system kick off with cultivations, where a 6m Horsch Terrano and Cousins nine-leg subsoiler of the same width do most of the heavy groundwork.

These initial cultivations are followed by a 6.3m Standen Powavator bed tiller – most customers opt for a 5.4m version – to ensure a full 6m pass.

Alterations to the Powavator include replacing its standard ridging bodies – deemed unnecessary as the planter puts them in behind a power-harrow – with a heavy-duty roller.

However, the extraordinarily dry conditions of April meant soil was frequently bulldozing up in front of the Kuhn power-harrow, so operator

Simon Hood elected to take off the packer roller across the farm’s light silt land after first experimenting with removing the levelling board.

This allowed the drawbar between the power-harrow and planter to be shortened, though it caused a slight loss of traction on the Challenger tractor.

For the job of planting, Mr Peck uses a modified hitch on the power-harrow to tow a Grimme Compacta GL 860 planter with on-board fertiliser tanks.

This was sourced second-hand from the Netherlands and plants eight rows spaced at 75cm, giving him the ability to apply Azoxystrobin or nematicides. The planter also steers itself on the rear wheels using a Trimble RTK guidance system.

Tines had to be fitted behind the double wheels of the planter to loosen the soil, as otherwise the hoods are not able to exert sufficient downward pressure to form a neat ridge.

The combination uses all of the Challengers 600hp when it travels at 5-9kph, depending on conditions.

Come autumn, lifting will be completed by a self-propelled four-row harvester which will work at 3m. 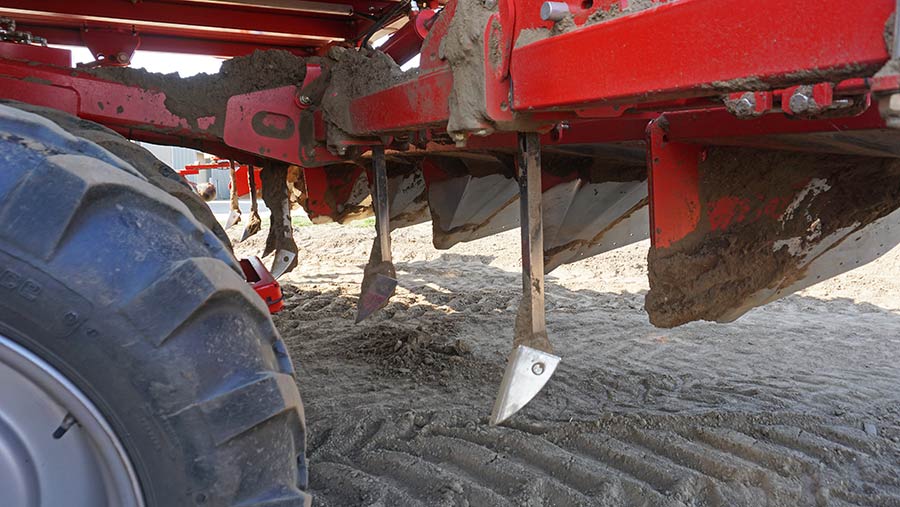 Loosening tines to allow the hood to work better

The farm already runs two Challengers and their spring workload comes to an end around the time that potato planting kicks off in April.

This meant PX could avoid having to invest more money on the grunt front. Similarly, the power harrow can be removed from the planter at the end of the season and used for preparing land following the sugar beet harvest during the winter.

The sprayer situation was more complicated. The business already employs two Horsch machines and a Bateman – all on 36m – but the Horsch’s PT280 has rigid wheel tracks, while most of its self-propelled rivals have adjustable systems that carry greater favour among vegetable growers.

This left Mr Peck with a dilemma, as he was unwilling to invest the money required to swap the Horsch for something else.

Instead, he looked at the way the tramlines are put in. On the planter, he installed eradicator shares that line up with rows three, four, five and six.

When tramlines are required, rows three and six are shut off and the corresponding eradicator shares lowered. This leaves a tramline of 800-900mm that suits the sprayer’s 1.8m space between the tyres and dovetails nicely with his CTF system.

The result is that his Horsch and other sprayers can run on standard tyres, without having to alter the track width.

This is particularly handy as the regular 520/85 R46 tyres travel more smoothly than row-crop alternatives, they cause less compaction and it saves the time that would have been spent switching wheels.

When an irrigation strip is required, rows three, four, five and six are shut off on the planter and shares hydraulically lowered to create a 3m path.

The trial required the co-operation of two farmers who were willing to give the system a go. One was established grower Simon Hartley of Fred Hartley Estates, Lakesend, Norfolk, and the other was Edd Banks of Thomas Banks and Partners, Cambridgeshire, who had never previously grown potatoes.

In this first season, the rig has planted a modest 140ha, but Mr Peck reckons a workload of around 400ha is more realistic, planting an average of 30ha/day.

In the off-season, the team will be busy with alterations, including replacing the power-harrow’s simple hitch system with a swan neck to improve manoeuvrability that will allow the planter to exert more downward pressure on the crawler to improve traction.

The loading of the planter also proved to be something of a bottleneck, particularly as its hopper only has capacity of around 6t.

To smooth the system, he plans to invest in a chaser that will be used to fill the Grimme planter in the spring and then get a second outing in the autumn unloading the harvester and filling waiting trucks.