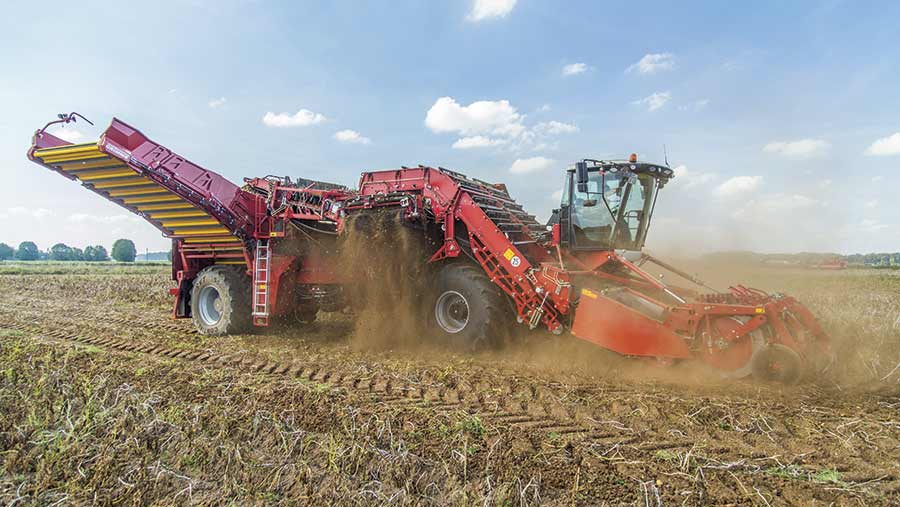 Powered by a 530hp Mercedes engine, the four-row Ventor 4150 has a huge 15t unloading bunker, eclipsing the capacity of its flagship Varitron 470 and Dewulf’s Kwatro by some distance.

The machine utilises the firm’s SE separation system from its one- and two-row trailed bunker harvesters that, until now, had been impossible to incorporate into a four-row self-propelled.

A trailed SE machine has a multi-level maze of lifting, sieving and conveying webs – including a wide-meshed de-vining web – plus an inspection platform to deliver clean crop to the bunker without the need for topping.

In the Ventor, Grimme’s engineers have essentially managed to squeeze a pair of two-row SEs into one machine, using clever folding mechanisms to draw it all back in to a road-legal width of 3.5m for transport.

The four-wheel steer giant is surprisingly nimble and has an added trick up its sleeve with its crab steer mechanism.

The patented design pivots just beneath the cab and allows the lifting shares and first web to move independently from the rest of the machine, while still maintaining an even flow to the second web.

This means the operator can spread the weight of the machine to minimise soil compaction, plus help to avoid collisions when working close to obstacles with its cleaning system unfolded.

A host of other gadgetry is thrown in as standard, including a new 12.1in touchscreen terminal and ProCam surveillance, which uses two wide-angle cameras to eliminate driver blind spots.

An evolution of the SE 260, the beefed-up Evo has three hydraulically driven wheels instead of two, which improves traction, reduces compaction and allows for increased bunker capacity.

Able to carry 9t instead of the SE 260’s 6t, operators have more time between unloading and the increase puts its capacity almost on par with a self-propelled machine for less than half the price.

An optional 5.5t Nonstop Bunker is available for those wanting to unload on the move and Grimme say this boosts performance by up to 20%.

Another new feature is the Evo 290’s VarioDrive system, which offers the advantage of both mechanical and hydraulic drives.

The separator speed can be adjusted independently of the pto and across a wider band for increased efficiency and fuel saving.

A high-output receiving hopper, separation and picking table combination is now available, too.

Adding to the RH series of machines, the PowerCombi has an 26-28 cu m receiving hopper and 2.4m wide separation belt to increase throughput by 25% over previous models, and can handle up to 100t/hr.

The crop and its impurities also pass through a new “Field Potato Sorter”, which uses infrared sensors to pick out clods, stones and trash and throws them out with plastic fingers.

This means less manpower is required on the picking table and offers 24/7 accuracy, cutting costs and maximising storage capacity.