This year looks like a bumper crop for British Sugar, with an estimated total yield of 1.4m tonnes of sugar. This is up 0.5m tonnes on last year thanks to a 33% larger growing area after EU quotas ended.

Six-row, self-propelled harvesters may steal the machinery limelight, but focus is turning to the logistics of getting the beet from the field to the factories in an efficient manner.

Moving the maximum amount of beet and minimum amount of soil doesn’t seem like a complicated task, but there are lots of new ways to perform a very basic operation.

British Sugar wants to reduce the total cost of the supply chain in an industry that historically has been split up between farmers, harvesting contractors, loaders and hauliers, and it’s the co-ordination of all these that makes as much difference as the high-value kit.

To combat the complexity, this year British Sugar is growing a significant acreage on its own under the GrowBeet banner. This will help to give the company a baseline for cost and efficiency calculations.

From harvester to clamp

With seemingly wetter cereal harvests and worries about soil compaction, the use of chaser bins on wide flotation tyres is becoming more common on arable farms. The likes of Hawe and Bergmann are selling purpose-built trailers, while Vervaet and Holmer have sold purpose-built, self-propelled machines. 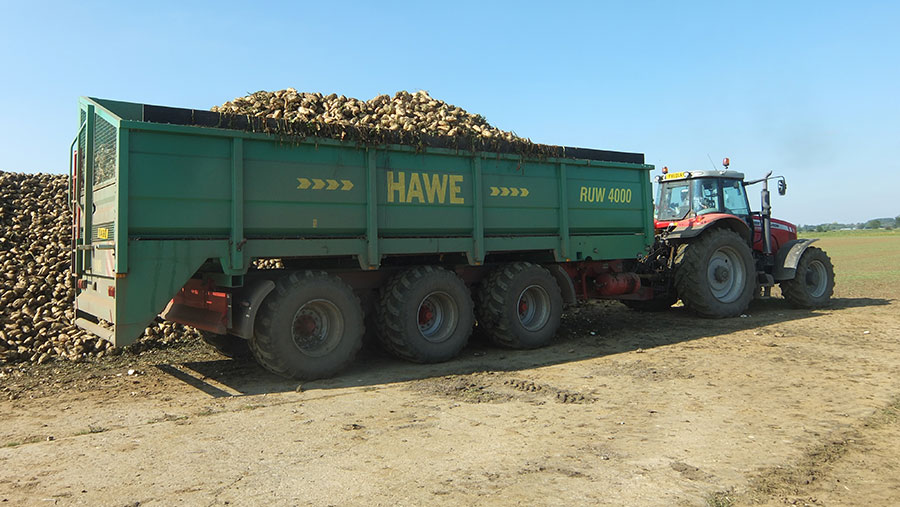 A triple-axled Hawe RUW 4000 will set you back around £80,000, while the similar Bergmann RRW 500 with crab steering on all three axles drifts into six figures. For that money you could buy three highly specced conventional trailers. 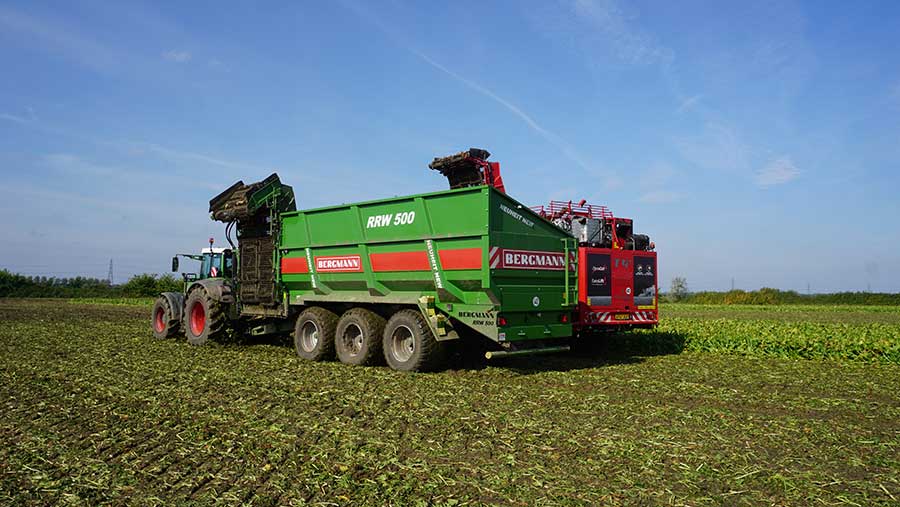 The faster cycle time, lower soil compaction and ability to keep going in the most difficult of conditions provide ample justification for some growers.

Chaser bins on tracks are common in the USA from companies such as Amity and Ropa North America but are yet to catch on in the UK.

The long road distances and heavy soil conditions are not a good combination for tracks, so buyers might favour a single axle with a massive tyre such as Horsch’s Titan grain cart. 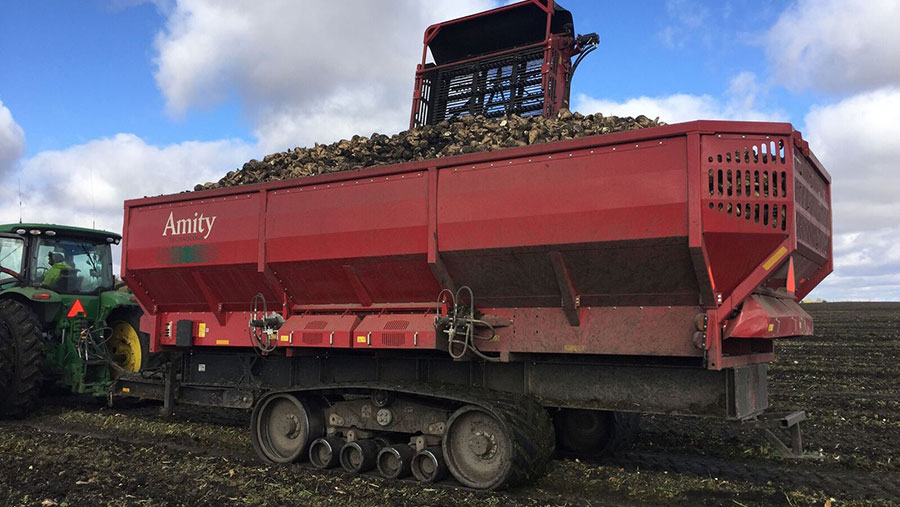 From clamp to truck

Loading directly from the sugar beet harvester to a truck is becoming a more popular way to do things.

British Sugar calls this “lift and shift” and it’s potentially the most efficient way of operating. However, it relies on a steady supply of trucks and relatively clean beet, so it suits early season crops near to a factory and grown on light soil.

Soil and stone content is often around 6%, so a 29t articulated truck will be regularly carrying 1.7t of tare. Naturally, the factory wants the beet as clean as possible and the most effective way is to do that is to run the harvesters slowly.

However. this isn’t an attractive prospect for contractors working on tight schedules, so for the first time this year British Sugar is analysing harvester performance and the trade-off between speed and cleanliness.

During 2016, British Sugar started experimenting with loading directly into trucks without letting the beet touch the ground. Grower Northfield Farms Partnership of Soham, Cambridgeshire, has now fully switched over to this system.

Their fleet comprises a Holmer T4-40, a Bergmann RRW 500 chaser with Fendt 939, a CTM 9333 cleaner loader with a JCB and a fleet of six Volvo trucks. They also cultivate and plant the crop so are in control of the whole supply chain, from seed into the ground to delivery at the Bury St Edmunds factory. 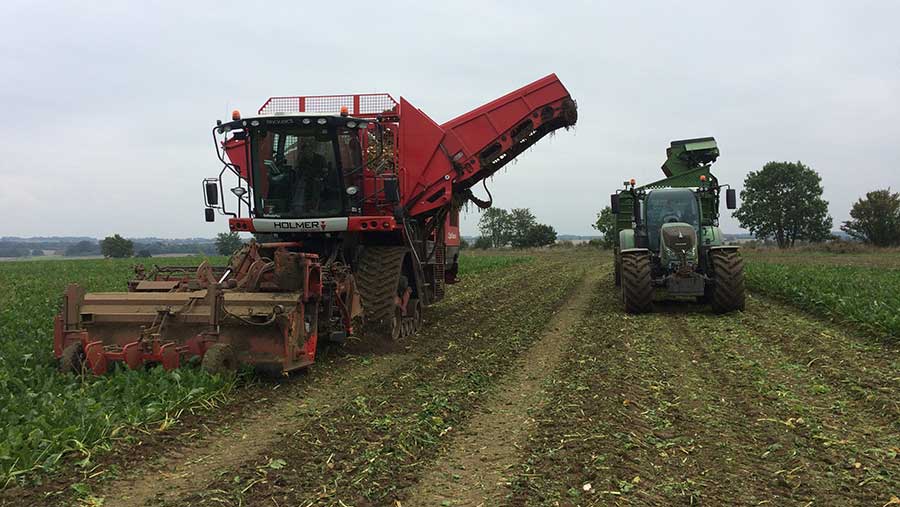 “We now have a balanced system with the harvester, chaser and truck all taking 29 tonnes,” says manager George Palmer.

“Previously, we had a 13t capacity Holmer and a 20t Bergmann chaser, which was always out of kilter with the trucks. This season we run four trucks on shorter runs and six on longer runs, so the harvester and chaser gives you two trucks worth of storage in the field.

“The Bergmann probably removes as much dirt as the cleaner loader since it has a very aggressive roller system on its floor.”

The effectiveness of the system was demonstrated with a field that had 50% lifted directly into the cleaner loader and, due to a change in weather, 50% clamped on the side. From the half of the field that was directly loaded, tare weight dropped by 5% and sugar loss was reduced by 1%.

“The labour saving is also big,” says Mr Palmer. “We used to have two trailers in the field and a man on the loader, whereas we now just have the chaser driver. It does mean we have to train the truck drivers to tidy up loose beet and operate the cleaner loader effectively, but we are getting there.”

From field to factory

The gross vehicle weight for trucks remains 44t, but telematics and geo-mapping are proving useful, with fewer empty journeys and reduced idling time.

Future developments will centre on making the kit smarter rather than larger.

An autonomous beet chaser, whether self-propelled or towed, shuttling between the harvester and loader or truck, will almost certainly come and Kinze is already experimenting with a cereals chaser in the USA.

Other sectors provide lots of ideas. Forage harvesters, for example, use sensing technology to fill trailers evenly and similar equipment could be used to fill trucks with beet. Systems for better controlling the flow of trucks by taking into account traffic and weather conditions will also reduce waiting time in the field.