German beet specialist Ropa has launched two new harvesters – the Panther 2 and Tiger 6. Along with upgraded lifting kit and an improved cab layout, there has been a monster hike in power output.

New versions of well-established machines tend to come with a moderate horsepower rise of 5-10% to justify the meatier price-tag, but Ropa has thrown convention out of the window with a huge 150hp upgrade on its flagship Tiger 6 beet harvester.

Outgoing Tiger 5 models came with a 625hp Mercedes engine, but its replacement has been assigned a 768hp Volvo Penta block that represents a generous 23% power hike. 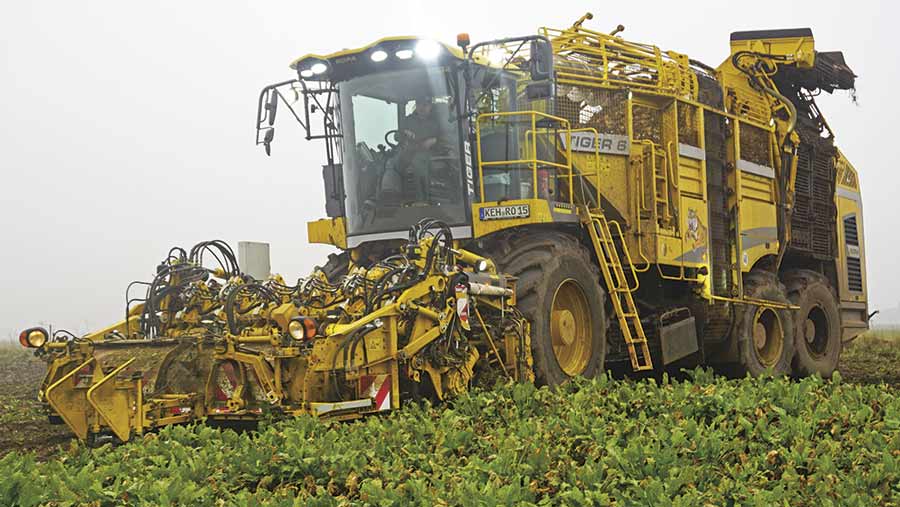 Being above the 750hp threshold means it is EU emissions compliant, but there’s also the option of a 700hp block with an AdBlue system.

The low-revving, 16-litre lump is tuned to chug along at around 1,100rpm in easy conditions and up to 1,225rpm on hills and with a full tank.

Despite the extra grunt, Ropa reckons that fuel consumption is a match for its predecessor, which means the bigger 1,320-litre fuel tank should last a good bit longer.

On the day of our visit the Tiger was purring along at 8kph on relatively easy silt land – hardly conditions to prove the value of the horsepower jump.

However, it was noticeable how much quicker it got the job done and the power hike has also allowed for an increase in hydraulic pressure all around the machine.

Alongside the big engine upgrade, the lifting unit has been redesigned and the RR header can be fitted as an option.

This includes a hydraulic stone trap and can be specified with six, eight or nine rows.

Up front, Ropa is testing a wheel-free defoliator, which the company claims causes less damage to the crop – particularly when opening up fields and while cornering.

A stand-out feature of previous generation Tigers was the large, centrally-placed hydraulic arm which was strong but restricted the driver’s view.

It has now been traded for two hydraulic arms on the side that, along with the use of more high tensile steels, has sliced 300kg off the 33.4t overall weight.

Elsewhere, sensors in front of the walking lift shares now allow for individual row depth control and the height of the shares can be clearly seen on the cab monitor.

This is likely to become more important as wider row widths, and less time spent on seedbed preparation, see more uneven ground come harvesting, so the depth control feature should be warmly welcomed.

Ropa has also upped the number of rollers that move the crop towards the intake elevator from six to seven.

Speed of all the rollers can be independently adjusted, as can the height of the roller bed to cope with different soil types, which the company claims results in 15% greater cleaning area. 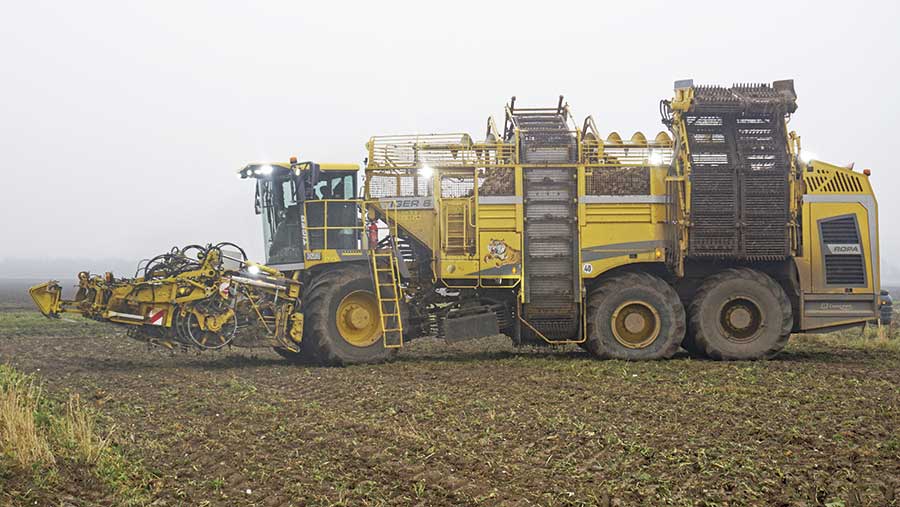 Another view of the Tiger 6. © Nick Wigdahl

The unloading elevator is 2m wide and the beefed up hydraulics result in a faster unloading rate of 60secs for 30t, while overall dimensions remain the same as the Tiger 5 – just shy of 14m long, 4m tall and 3m wide.

The office space is roomier than before, with more storage space and stacks of controls to manage gate height adjustment, row width and the speed of all the main units.

There’s no change to the computer terminal, which is the same as the Tiger 5, and the reversing camera is due to be upgraded on production models.

Options to make the driver’s life easier include an air conditioned seat and an LED light package – useful on a gloomy fenland morning – while the view out the front window has improved thanks to the removal of the central arm. 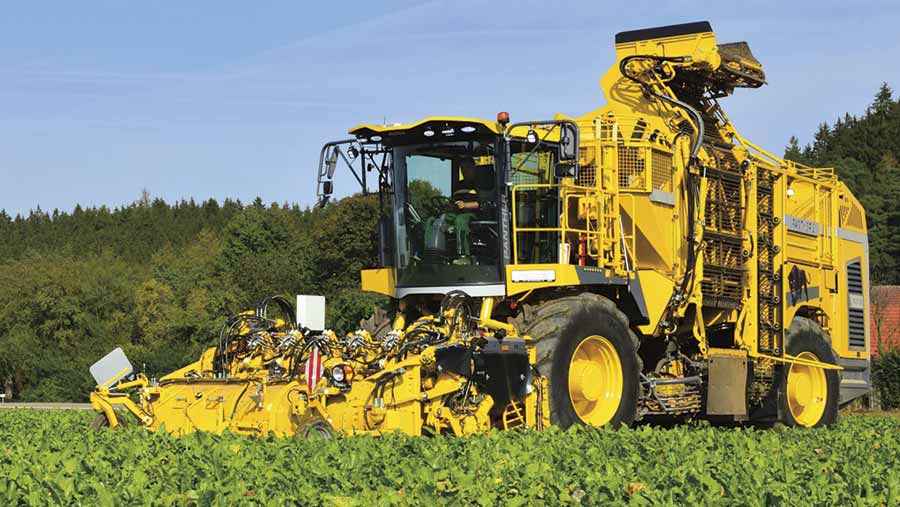 Outside, buttons on a panel allow the harvesting and defoliator units to be moved outside of the cab, which a button at the rear allows operators to fire up the engine.

Prices have yet to be finalised by importer CTM Harpley, but interested parties can expect to pay in the region of £460,000 for the Tiger 6 in a base specification.

There’s also a new Panther 2, which comes with the same engine in a smaller frame – a combination that could well prove attractive for contractors working in hilly conditions.

The working parts of the machine are largely the same as the Tiger, aside from tank size and slightly larger turbines.