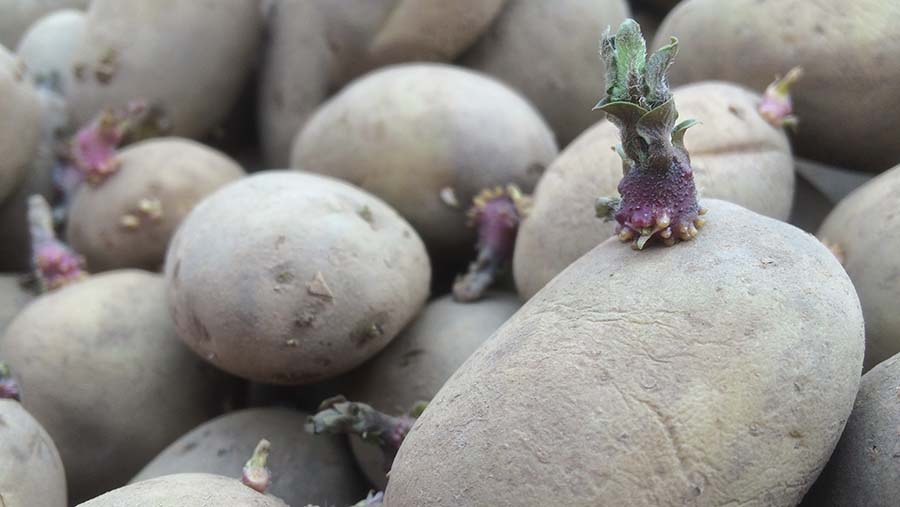 Staffordshire-based potato producer WB Daw & Son hadn’t chitted its seed for more than a decade but, after developing its own time-saving, easy-to-use system, chitting is now firmly back on the farm’s winter agenda.

Chitting potato seed is the process where tubers are stored in trays and encouraged with light and controlled temperature to break dormancy and produce sprouts ahead of planting.

The latter two are particularly useful when growing late-maturing varieties, helping avoid tricky harvest conditions at the back end of the season.

So, if chitting is so useful, why has the practice declined?

Sam Daw, who produces about 223ha of processing potatoes near Rugeley, Staffordshire, with his father, James, says there were several reasons it was scrapped on their farm. 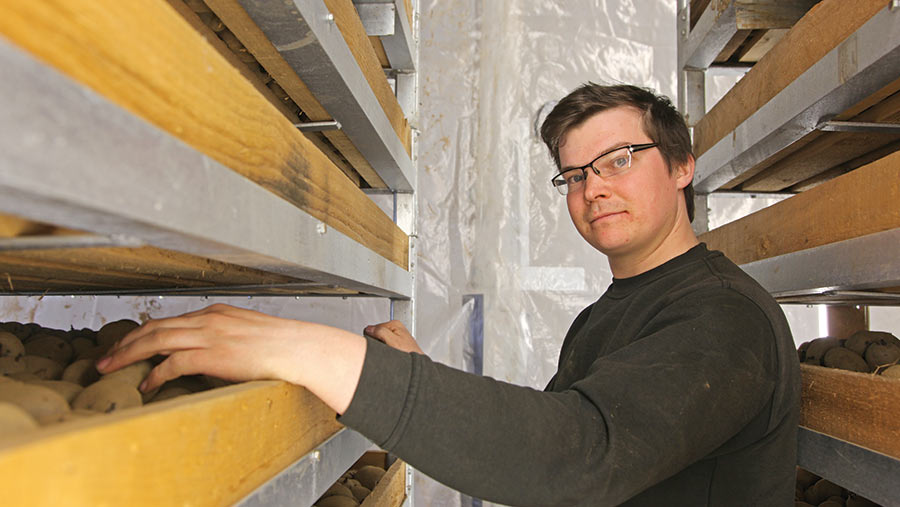 At the time, the business was expanding its potato enterprise and introducing varieties that did not benefit from chitting for different markets such as crisping.

It was also a very labour-, energy- and time-intensive process, with up to six people busy filling and stacking trays during the winter time with an output of 10t a day.

“It was an all-hands-on-deck job for two days, as well as sorting halogen tubes for lighting and gas burners for heat in a big shed. Then, at planting time, all the trays had to be emptied into the planter individually and restacked,” says Mr Daw.

With the farm’s potato area expanding, the drive for greater efficiency won out and there was a shift to just-in-time delivery of seed in bulk bags ahead of the spring planting period and handling seed in 1t, 6ft x 4ft potato boxes.

However, a switch to growing a proportion of their crop for McCain’s production of McDonald’s French fries saw chitting come back on to the radar.

The farm was also working closely with McCain’s agronomist Matt Smallwood, who proved in many trials – including some on the Daw’s own land – that there was a significant boost to marketable yield from chitting the variety Pentland Dell, offering more tubers in the valuable greater-than-90mm size fraction than unchitted seed.

In 2015, James made the call to start chitting again, though Sam was less keen, remembering the laborious task from years before when using traditional small chitting trays, hand-stacked on pallets.

He looked for alternatives, but nothing caught his eye. Alongside the traditional 75cm x 45cm x 15cm trays, he found a larger tray roughly the size of a pallet that can be lifted and moved by a telehandler.

However, there was still the problem of having to handle and empty each tray individually.

The only other ready-made option was a steel mesh potato crate, which uses a steel frame roughly the size of a potato box that is divided into compartments by steel mesh.

About 500kg of seed is poured into the compartments and stacked in the chitting shed, with the mesh construction allowing light and air around the seed to encourage the chit. A box tipper can then empty the crate directly into the planter.

“The concern I had with this system is that emptying the seed against the mesh could knock the chits off. 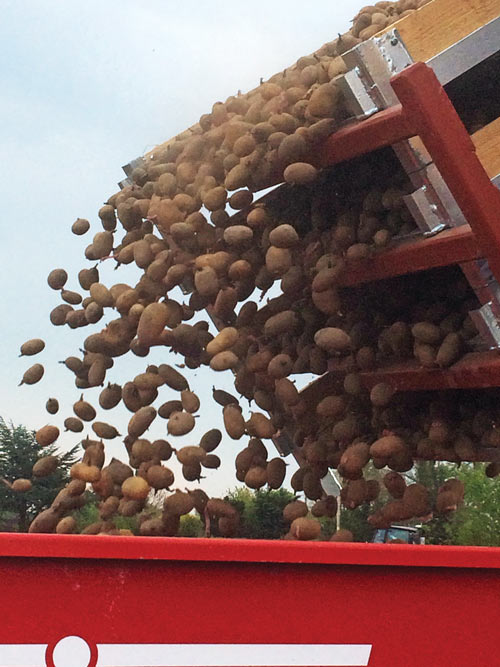 “Being gentle is crucial to any system and you don’t want to lose any of the chits, as all the benefit will be gone and it could also open up a spot for disease to get in.”

With an idea of what he wanted, Mr Daw went about designing his own system. The objective was to produce something that handled large quantities of seed in one unit, could be moved around with current kit, allowed uniform light around the tubers in store and was easy to empty.

The farm’s seed store was designed to fit 6ft x 4ft potato boxes that are moved with the forklift’s pallet tines or box tipper – the quickest and easiest way of handling and emptying them – so it made sense to integrate the new tray system into the current layout.

After making templates and a prototype, a load of pre-cut steel and timber was ordered and the farm’s sprayer operator and talented welder, John Bibb, spent the winter in the workshop, welding and bolting it all together.

All the trays interlock to ensure they are strong and stable and can all be emptied together. Each tray carries about 100-125kg of seed depending on seed size, with each stack holding 400-500kg and piled in store four high. 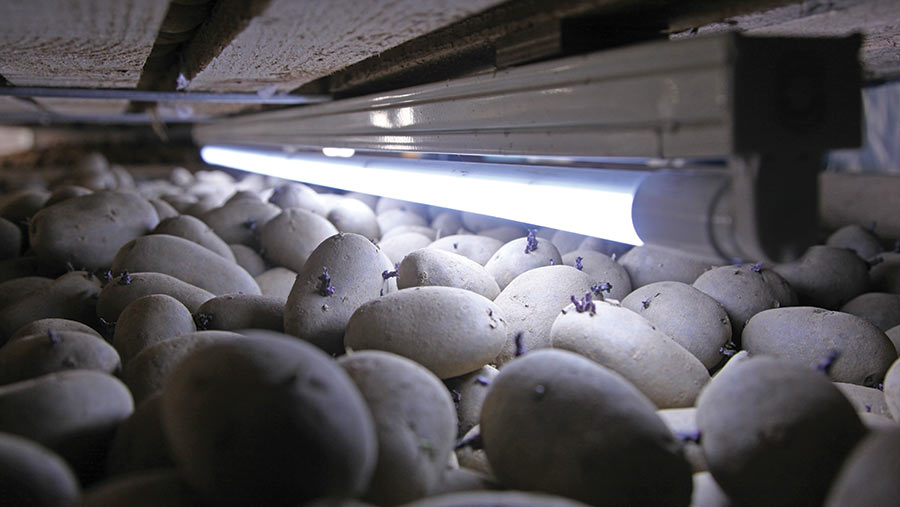 The bottom trays are slightly taller and have pallet tine channels with locking bars to keep the stack steady on rough ground and there is an option to build in LED lights into the underside of each tray to help with light dispersal during the chitting process.

These are simply plugged into a central electric distribution board connected to the mains and the LED lights produce no heat, helping to maintain the desired temperature within the chitting store.

Inside the trays is quadrant beading in all corners to help the seed run out when tipping in to the planter, which is achieved by removing the end slat of each tray before engaging the box tipper above the hopper. 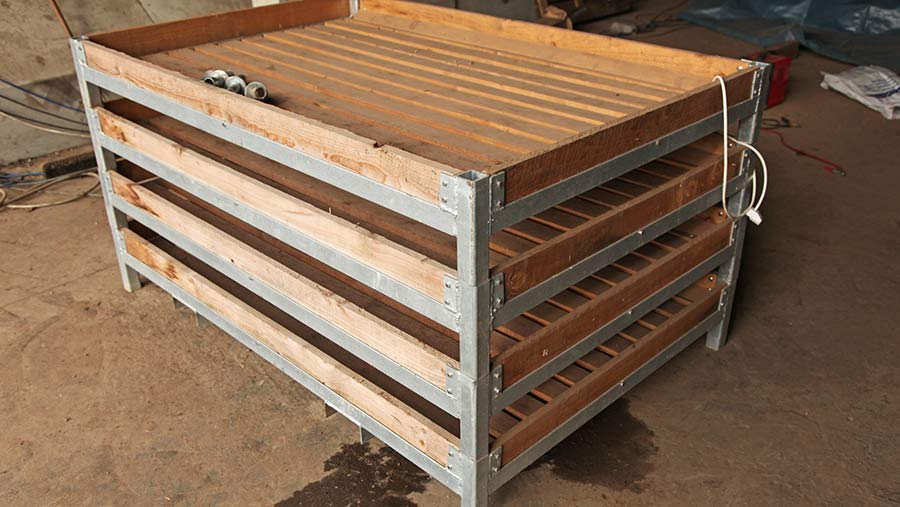 Mr Daw says the beauty of the system is that the seed arrives in bulk bags in December and it takes five men and a loader just half a day to tray up 30t of Pentland Dell seed.

The rest of the chitting procedure can then co-ordinated by one man and a loader, with the seed put into cold store until February, when it is moved into a chitting store.

It is then loaded on to flat trailers and taken out to the planter, emptied and brought back to the yard ready for the following season.

“The stacks are only taken apart once a year when we fill the trays and that’s it. With our system, it is clear to see the benefits, as you are saving on labour and time and minimising damage to the seed, while handling larger quantities of seed with ease.”

Mr Daw says he has already had a lot of interest from other growers and they are now planning to start producing the Mega-Chit system commercially.

“We even had calls to put in orders, but haven’t been in the position to turn out the numbers.

“We are in final talks with a leading potato equipment supplier about manufacturing the system for us and hopefully we will be able to start taking orders for planting 2019 later this year.”