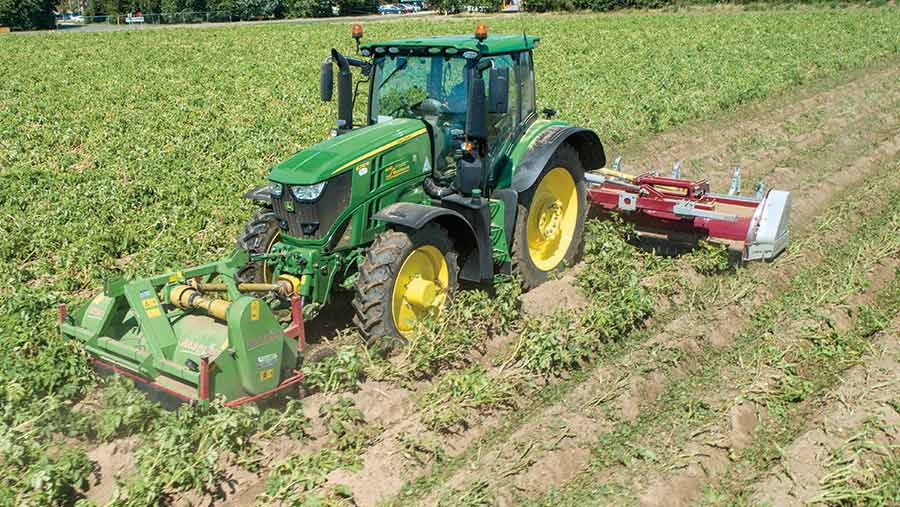 The loss of broad-spectrum contact herbicide diquat didn’t come as a surprise, but the months of speculation finally ended when its scheduled withdrawal was announced late last year.

While a number of crops will be affected, none will be hit harder than the potato sector, which has relied on the active ingredient for quick, cost-effective burn-down of potato tops since sulphuric acid was banned in 2009.

While other contact-acting herbicides are approved for desiccation, it is likely that many growers will opt to use an initial pass with a flail topper to knock down and mulch foliage before using these products to finish off stems.

As a result, manufacturers report an explosion in enquiries about haulm toppers, with one telling Farmers Weekly that sales have more than doubled in 2019 compared with the previous year.

With diquat use is still permitted during 2019, this suggests that some have been proactive in their machinery purchasing, ordering a topper to get some experience while the pressure is off.

For those planning to adopt a mechanical system that haven’t yet placed an order for 2020, they are advised to do so soon to avoid disappointment, as demand will continue to rise and production of the three main brands currently sold in the UK is finite.

Here, we take a look at what size and specs are on offer from Baselier, Scott’s Precision Engineering and Grimme, and how much the tractor-mounted machines might set you back.

The Ely-based outfit Standen Pearson makes its own two-row topper to go on the front of a tractor and trailed harvester combination, but when it comes to rapid haulm destruction over a large acreage, growers need something more substantial.

Since 1996, the firm has been importing Baselier toppers from Holland for this purpose, and the lightweight, olive green-and-red machines have proven a reliable option for spud growers.

Standen’s Edward Gilbert says one of the worries for growers moving to a mechanical system is travelling through the crop when land is wet.

For farms that destone, material dropped between each row can provide a more solid base for tractors moving through the crop with a topper on narrow wheels.

However, on deep silts or black land in intensive potato-producing regions such as Lancashire, Cambridgeshire, Norfolk and South Lincolnshire, soils are virtually bottomless and when wet, deep rutting is a serious concern.

This not only damages soil structure, but can also see the machine harm the crop, so opting for a lighter topper that can be hooked up to a smaller tractor is a more attractive option. 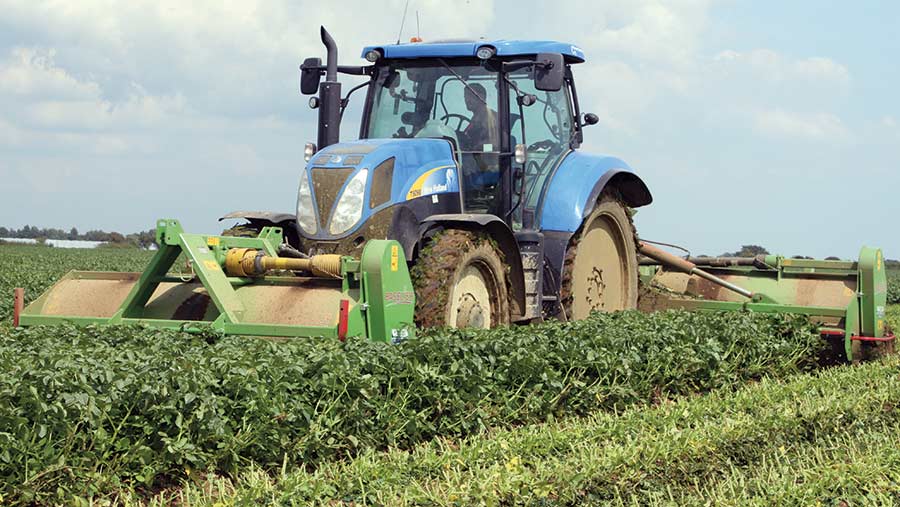 Baselier offers four-row machines that can be operated by an 80hp tractor, plus six-row versions that have a horsepower requirement of 150hp, giving growers the ability to tread lightly where required.

At the other end of the range, machines can also eat through six or nine rows in a three-section hydraulic-folding configuration, with one front-mounted unit and the other two mounted behind.

The extra width helps suck and mulch tops in wheelings, preventing them being pushed down by tractor wheels and avoiding the rotor, and is popular among growers on 2m wheelings.

Juice from the potato tops is highly corrosive and without additional protection, it eats through the mild steel hoods in just a couple of seasons, so Standen specs all UK imports with stainless steel liners for longevity.

Rotor speed on all models is 1,150rpm and there is a range of optional extras to choose from.

The rigid-mounted four- and six-row LKB models are available with an end-to-transport kit for an additional £1,300.

All models are “top and drop”, which means they spread the haulm across the width of the machine.

However, for effective follow-up applications of desiccants such as Spotlight or Gozai, mulched material should be dropped between beds.

Growers can opt for mild or stainless-steel plate deflectors for this purpose and about 90% of Baselier toppers sold in the UK are fitted with these.

Other useful add-ons include press wheels to firm up the ridges as the topper passes though (preventing green tubers), which cost £325/row, and hydraulic depth wheels supplied for £1,300 in lieu of standard. 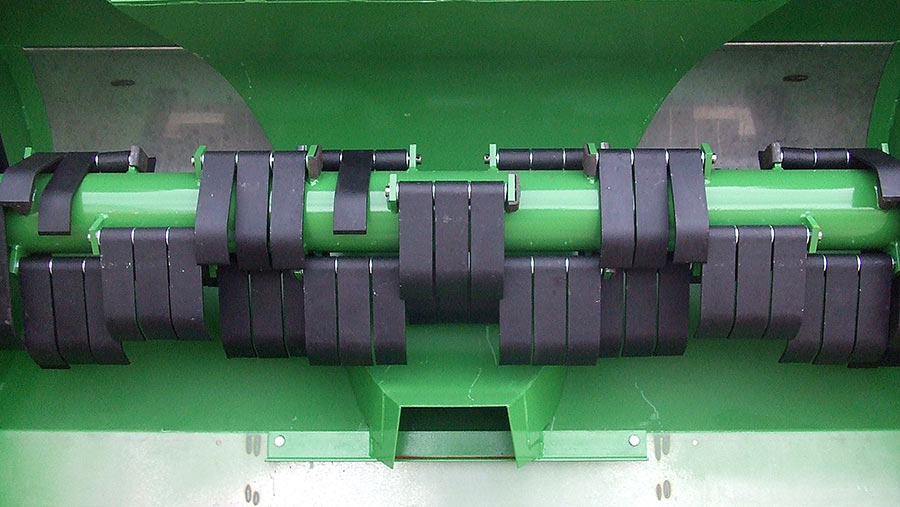 Over its decade or so in the market, Lincolnshire-based root crop equipment specialist Scotts Precision Manufacturing has developed its six-row haulm topper to handle higher-horsepower tractors.

The Trinity 6000 front- and rear-mounted configuration has seen its gearboxes uprated to handle machines up to 250hp, which helps to maintain forward and flail speed in high-biomass crops.

The rotor is driven by five V-belts and large-diameter pulleys, which the manufacturer claims is more robust than most other UK competitor models.

The two rear units sit on a parallelogram system that allows each to float independently over contours and fold hydraulically into a 3m transport width, while the front section can be used as a standalone two-row machine for harvesting operations.

Scotts also claims to have the greatest variation in flail length on the market, with 140mm, 180mm, 235mm and 275mm versions available.

This allows longer flails to be positioned above valley bottoms, creating more suction to pull in flattened and tangled tops.

When combined with adjustable castellated shear plates at the front of each hood, it results in a cleaner and finer mulch across the width of the topper pass which is more easily sieved out by the harvester when lifting the crop, the firm says.

However, with the impending loss of diquat and rising demand for high-output machines, it relaunched its KS600 three-bed topper at the 2019 Lamma show.

Designed specifically for UK growers (and built in Britain), it was originally brought to market in 2001 and the tried-and-tested machine has not changed much since. 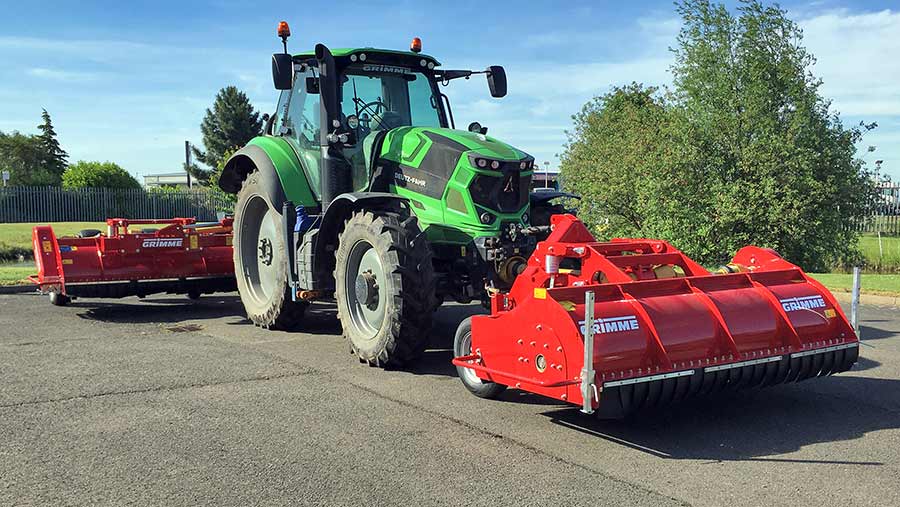 One of its notable features is a working width of 2.3m on the front-mounted unit so it operates on a proportion of the adjacent rows.

This stops the tractor pushing green haulm into the wheelings and that prevents it from being mulched.

Each topping unit has two spindle-adjusted depth wheels and are spring-loaded to maintain a constant topping height. Deflector plates help channel residue into the valleys.

This is said to reduce disease risk and clears the way to effective applications of stem desiccants.

In addition to the high-output KS600, Grimme also offers some smaller and more cost-effective rigid options, including the four-row KS3600 and six-row 5400 that can be mounted on front or rear three-point linkages.

Both have similar mechanical specifications, although the six-row machine has a heavier-duty five V-belt drive, rather than the four-belt arrangement on its little brother.

Topper height is crucial – too low and flails can scalp rows and damage valuable crop; too high and harvesting will be hindered because haulm tops are too long.

You should aim to leave a length of about 15-20cm – this is enough for the harvester’s haulm rollers to get hold of and remove material, but not too much that it will block the machine.

Rotor speed affects how much suction the topper creates to pull haulm into the machine and where the debris gets blown after the crop is topped.

Make sure the tractor has enough horsepower to run the topper, as underpowered tractors are one of the biggest causes of incorrect rotor speed.

Other variables include drive pulley size or configuration – if you’re unsure about this, speak to a technician.

It sounds simple, but blade configuration and shear blade gap adjustment get overlooked on a regular basis.

Make sure your blades are configured to the correct row width, otherwise it can create a lot of damage.

Incorrect shear blade gap results in a poor cut and haulm length will inevitably be incorrect, so it should be checked and adjusted to achieve the best results.

Forward speed has a big effect on how efficiently the topper will work.

Too fast and it is more likely to strip the leaves from the plant, rather than cutting the stems to stop tuber bulking at the correct stage.