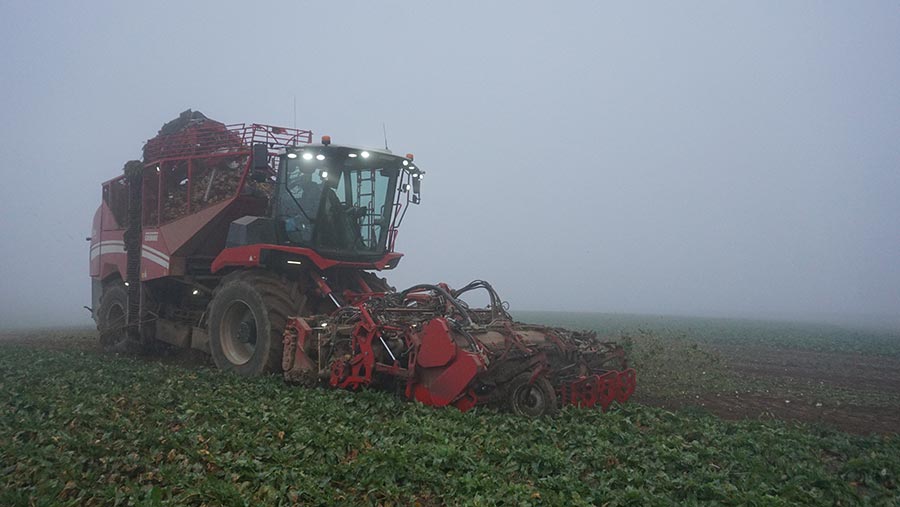 Grimme’s Rexor 620 sugar beet harvester is now 10 years old, so the company has taken the opportunity to upgrade both it and the larger 630 model to a new Rexor Platinum platform, with developments focused on increased output, more careful crop handling and better driver comfort.

British Sugar and its continental counterparts have been putting considerable emphasis on reducing damage to the crop in a bid to cut sugar loss. Responding to this, Grimme has enlarged the pockets on the 90cm-wide ring elevator to produce a claimed 25% increase in output, while also allowing the elevator to run at a slower speed to reduce damage.

Building on technology it has designed for the potato-harvesting market, the company has also developed a drop-height reducer, which means the distance from elevator to bunker is automatically minimised.

Elsewhere, the angle and shape of the tines on the cleaning turbines have been changed and the guide bars can be quickly and easily adapted by the driver to suit soil conditions.

Spring tine packages are available as an option for clay-rich and sticky soils, and the new quick-change system allows a simple modification from guide bars to spring tines. The Speedtronic system regulates turbine and ring elevator speed according to the load, too.

See also: Opinion: Does sugar beet still have a place in the rotation?

In the cab, the company has managed to trim noise and the driver’s seat is now equipped with an extra-high backrest and headrest, significantly improved suspension comfort, seat heating and an air-conditioning system. Added to that, the narrower bunker shape in the front provides improved visibility of the unloading conveyor.

An optional ProCam system is also available, which lets the driver monitor the left and right sides of the machine via two cameras and an additional monitor. The ErgoDrive operating system allows drivers to store and personalise specific machine settings.

Other changes worth noting include a power hike that takes the Mercedes engine to 653hp, a 15-litre hand-wash unit and a compressor unit for cleaning down the machine.

It has also had a styling makeover, including an LED lighting package and more rakish looks worthy of Grimme’s car-making compatriots BMW and Mercedes.

Contractors Alan and Stephen Witham were the first customers of the original Rexor and have been testing a pre-production version of the Platinum.

Alan notes that the flow of crop across the roller bed and the turbines is much smoother.

On lighter north Norfolk soil they have been harvesting at up to 13kph, so overall output has been significantly higher. The Mercedes engine also works well, sipping just 23 litres of diesel an hour.

Alan reports that major changes to the cab and control systems are few and far between, although Grimme is rumoured to be looking at replacing the two terminals with a single, larger one.

The company has switched from Opal wheels to walking shares, too.

“With a level seed-bed Opal wheels do a better job, but we have noticed over the years that seed-beds have become less even. It’s partly due to drills getting wider and seed-beds being prepared in a hurry,” he says.