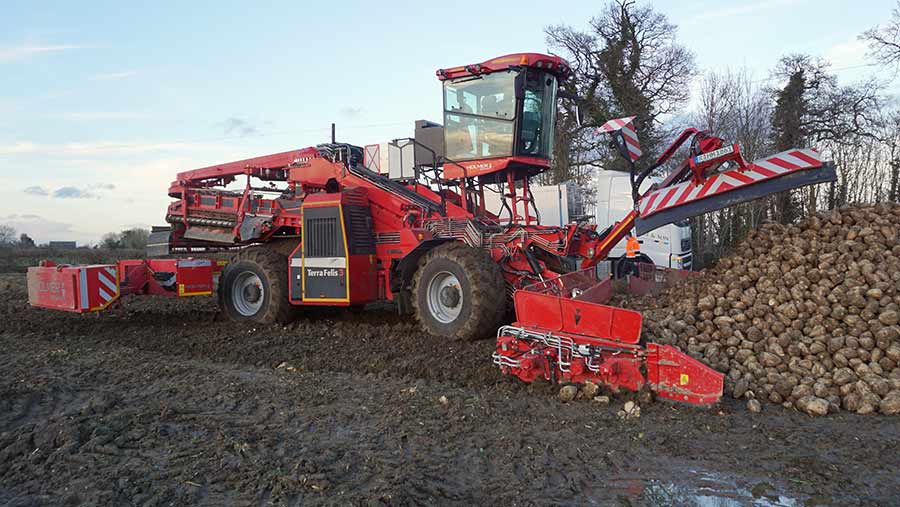 Holmer is looking to challenge Ropa’s dominant position in the UK for self-propelled beet loaders with a rival machine first unveiled at last year’s Agritechnica show.

Seen as a direct rival to the Maus, Holmer has wasted no time in bringing the Terra Felis 3 over to the UK for testing. And, with all the continental beet factories now shut, February is a perfect time to trial new beet equipment in the more difficult British conditions.

In some respects Holmer is playing catch up with Ropa, as it uses the same Tier 4 compliant Merc 354hp engine and rising cab concept that have been established standard features on the Maus 5 for some time.

Yet in other areas Holmer has pushed ahead with interesting innovations. The 9.5m wide VarioPick intake bed can be tilted between 17deg and 22deg, which means early in the season when the beet is relatively clean and dry the table can be fairly flat and later, when it is wet and dirty, it can be angled up to produce a more aggressive cleaning action.

The cleaning rollers now have a greater diameter, at 140mm, the ridges on the rollers have been increased to a height of 20mm and the route that the beet takes over the 18 rollers can be varied according to conditions.

Optional extras include a weighing system and DynaFill, which automatically alters the filling of the trucks to make sure that no beet spills over the edges – the same technology as being used by the likes of Krone on its forage harvesters.

The massive 1,400 litre fuel tank should store enough juice to keep the machine running for 24 hours – commonplace in Germany – and it wears Michelin 710/75 R 34 rubbers as standard.

Starting price, depending on the exchange rate, is around £400,000 before any options are added. For those on a smaller budget, Agrifac UK – Holmer’s importer – is also offering the RRL200 eco-trailed loader which has been on trial this season and comes with a beefy 100hp Perkins engine and 9cu m bunker capacity.