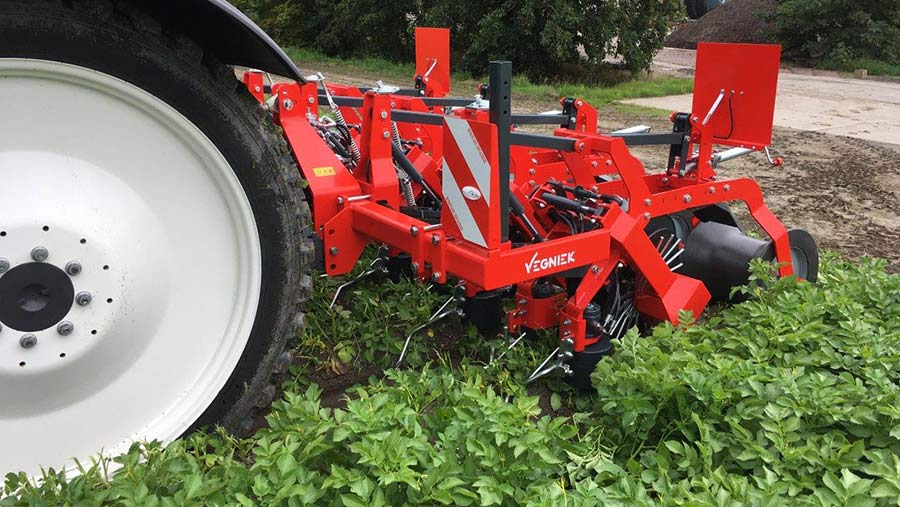 A Dutch-made potato haulm puller is now available in the UK through Ely-based Standen Imports, offering growers a simple and cost-effective method of haulm destruction.

Following the withdrawal of chemical desiccant diquat, there has been much discussion over which alternative haulm destruction method, or combination of methods, is best.

The vast majority of growers have opted for a flail-and-spray approach, which includes a pass with a topper to knock down the canopy, followed by applications of PPO-inhibitor herbicides to finish off the green stems.

While many farmers will continue with this process for the foreseeable future, there is an increased focus on sustainability and a drive to reduce reliance on chemical inputs in crop production.

This will inevitably result in producers looking for non-chemical options, and the haulm-pulling method could gain some interest in both conventional and organic sectors.

Previously, there had been concerns about crop damage, either physical or when stolon and tuber separation is not complete – pulling tubers towards the soil surface and exposing them to the environment – causing greening.

However, Dutch brand Vegniek thinks it has solved this issue with its Discmaster series of haulm pullers, which has been designed to reduce crop damage and effectively reseal the ridges following the pass.

Spring-loaded guides navigate the haulm into the intake drums, along with a small amount of soil. Pull discs then separate the haulm from the roots, with stainless-steel gliders preventing potatoes being dragged out of the row.

Diablo rollers mounted at the rear gently press the loose soil to cover the potatoes and ensure they aren’t exposed to the elements. All the components are independently suspended for following undulations in the field, and haulm guides are adjusted manually.

The speed of the pull discs is variable and tweaked from the tractor cab, while working depth is altered using a spindle at the back of the machine.

The firm says that pulling potato haulm can reduce the need for at least one – or possibly two – chemical sprays, and can eliminate the need for herbicides altogether.

With haulm pulling, growth stop is immediate if stolon separation is efficient, so passive bulking of tubers – and potential loss of marketable yield – is prevented. It is claimed that the skin-set process also takes much less time than with herbicides – there is no lag between application and haulm death and, therefore, less time between haulm pulling and harvest – with skin set achieved in as little as 10 days. T

his reduction in time between hardening and harvest reduces the likelihood of soil-borne diseases, such as rhizoctonia, taking hold – particularly important for seed producers.

Standen Imports is the exclusive UK supplier of the Discmaster and offers four models, including the two-row Discmaster 150, four-row 300, the rigid six-row 450 and six-row folding 450F.

Options include load-sensing hydraulics and hydraulic lifting of the individual pulling elements. The on-farm starting price for a DM150 is £29,990, including delivery, setup and VAT.