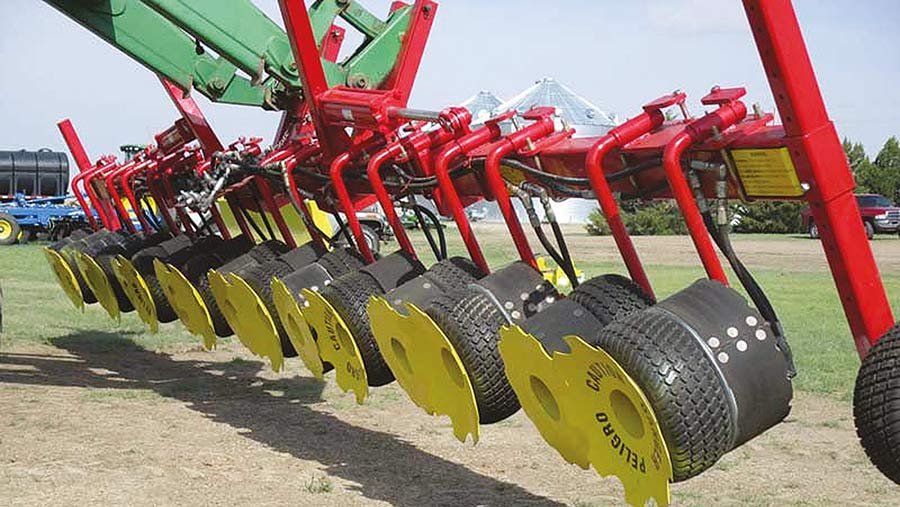 Hand rogueing is the established but tedious means of cleaning sugar beet crops of tall weeds that have survived inter-row cultivation or a herbicide programme.

So it will come as a relief to family members, agri students, farm staff and anyone else press-ganged into doing the job that mechanical alternatives are finally here.

Inventive engineers in Germany and the United States have come up with weeding devices that grasp the offending plants between powered rubber tyres, yanking them out of the ground.

“This is a great solution for farmers growing sugar beet, vegetables and more who want to be rid of weeds that have grown tall in the row,” says Dan Bourquin, who patented his original Weedpuller design in the US eight years ago.

“The first thing growers need to do is grab the weed by hand at the height you’re wanting the Weedpuller to work to clean the crop,” he explains. “If you can pull the weed out by hand, the Weedpuller will work.”

In Germany, Hermann Klünder is a relative newcomer to the field of extracting tall weeds from a growing crop, having developed his Weedplucker over the past two years.

He was approached by contacts in the beet sugar industry asking for a solution to a notable weed problem experienced by organic growers in particular.

Series production has already started with a view to taking further orders from this summer onwards. There are already four examples of the Weedplucker at work in Germany and one in Denmark. 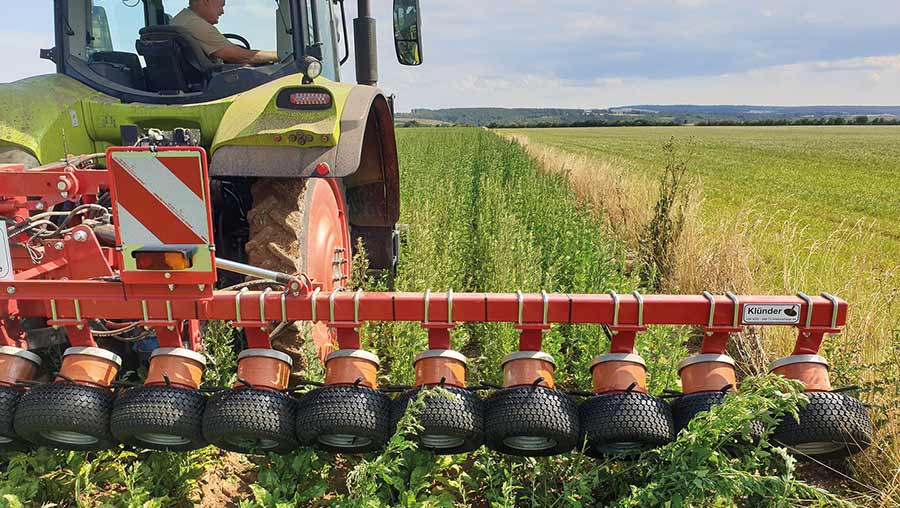 Each wheel on the Klünder Weedplucker is in contact with its neighbours; the upward rotating pairs do the work

Nordic Sugar has taken one to support the company’s organic farmers who need alternatives to the costly process of rogueing in sugar beet.

It points out that the machine isn’t designed for full weed control – undesirable species should be removed much earlier in the growing season to reduce the impact on crop yield – but there is still a long-term benefit to removing tall plants rather than leaving them in the field.

According to Mr Klünder, using the Weedplucker is cheaper than pulling out weed plants by hand. In contrast with other mechanical methods, such as cutting, it also takes out the whole plant, including the roots.

Neither of the rogueing devices will clear all plants of a particular species because they rely on a decent length stem protruding above the crop for the tyres to get a good grip and also sufficient plant strength for it to be pulled out rather than snapped.

How strongly the weeds are anchored into the ground is another factor; plants that come out easily in moist soil will hang on more determinedly in dry conditions, especially in heavier soil types.

In terms of timing, as with the prominent weed “mowing” technique (Farmers Weekly, 24 July), offending plants will ideally be pulled up before they have produced viable seed.

Regardless of all these factors, these devices do offer growers keen to clean up bad infestations of prominent weeds – whether of the organic or chemical persuasion – an opportunity to reduce the pre-harvest weed burden.

Although similar in overall concept, there are several differences between these two mechanical weed extraction systems.

The Klünder Weedplucker has a continuous row of single tyres, each in contact with its two neighbours, with hydraulic drive to every third or fourth wheel and four radial tines on each wheel assembly helping to guide weeds between each pair of tyres.

The continuous arrangement of wheels means the device alternately pulls plants upwards and downwards, but the layout is configured so that upward pulling pairs are aligned with the crop rows.

In contrast, the Bourquin Weedpuller 101 has tyres arranged in pairs with hydraulic drive to one wheel in each pair so that all are pulling upwards. Adjustable spacing on the toolbar caters for different crop row centres. 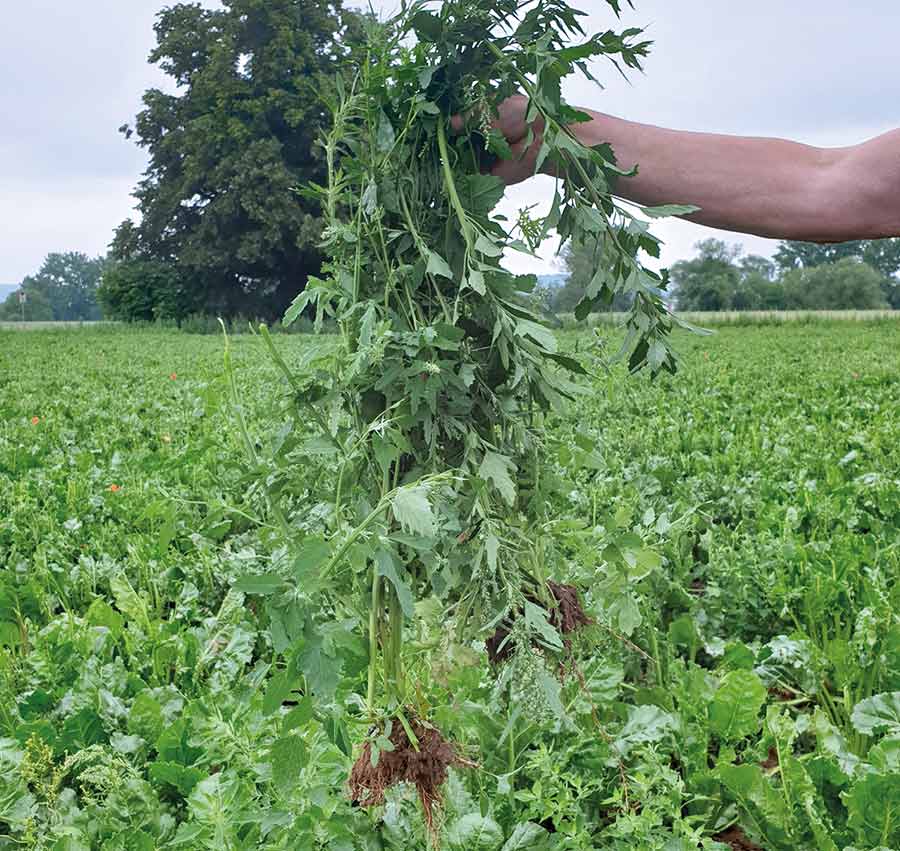 Each tyre is accompanied by rubber roller of slightly smaller diameter, mounted on the same axle, and these assemblies are arranged alternately with the tyre leading or the tyre behind so that adjoining pairs mesh together.

This effectively increases the amount of rubber gripping the plant as it is grasped and bent forward.

“It’s important to understand that we’re not trying to jerk the weed out of the ground,” says Mr Bourquin.

“We learnt that slowing the rotational speed of the tyre/roller combination improves the grip on the plant and so to a large extent it’s the forward motion of the implement that drags the weed out of the ground.”

A further development of the Bourquin design came with the Posi Pull Disk option.

This is a flat notched disc mounted on the rear face of the tyres and rollers that gives the weed a “kick” as it is tensioned between the tyres and ground.

“Our first blades were too sharp; we now have thicker, blunter blades with a softer strike point, which help pull out the bigger, well-anchored weeds rather than cutting them,” says Mr Bourquin.

The Weedpuller is typically mounted on a tractor’s hydraulic loader but front three-point linkage mounting is also possible.

The implement can be produced in almost any width to suit growers’ requirements. In the US growers who want to try before they buy are sent a single two-tyre unit in exchange for a refundable deposit of $3,600 (£2,800).

Dan Bourquin says: “The machine works well at 2-4mph, although I’ve had farmers tell me they never operate that slow.”

That is much the same speed range recommended for the Klünder Weedplucker, which is being built in 3m and 6m sizes for front or rear operation, and in a 9m version using a combination of front and rear units.

The 3m and 6m versions can also be had with two rows of tyres to increase the weed plucking effect.

See the two systems in action below: