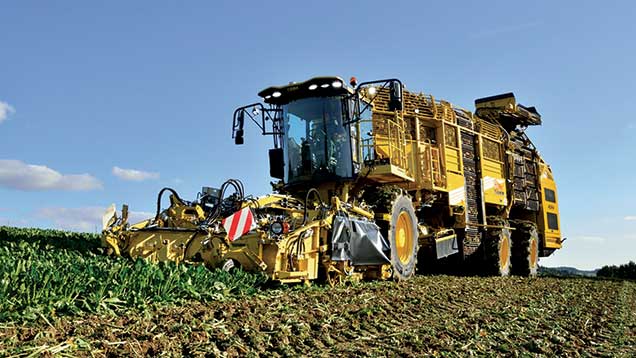 Ropa’s current three-axle Tiger 4 beet harvester, already a pretty big and sophisticated piece of equipment, has been replaced by the Tiger 5.

Its automatic roll-stabilising and slope-compensation systems have already been used in the company’s smaller Panther model, but the new model now gets a hydraulic chassis suspension on the rear axles.

The Tiger 5 also gets an oscillating front axle that works in conjunction with two hydraulically supported rear axles. Compared with the previous chassis on its three-axle beet harvesters, where the central axle is fixed to the frame, this is said to reduce the sway of machine by one-third.

Linking the hydraulic stabilisation cylinders on the front and rear axles and on each side means changes in ground contours now have less of an effect on the machine, says the company.

There’s also less chassis swing and row and depth control are both improved as the frame is kept steady by the three axles, allowing the load to be spread equally.

An automatic levelling system using six hydraulic cylinders and sensors stays level, even on slopes up to 10%. The company claims that, even in extreme situations, the Tiger remains stable where other harvesters might tip over.

Bigger 800/70 R38 Michelin Ultraflex tyres on the front axle and 1050/50 R32 MegaXBib tyres on the rear axles give good soil protection, says the company, even with a fully loaded 30t bunker.

A 15.6-litre Mercedes engine provides 626hp and puts it through a stepless CVT  traction drive developed by Ropa, Omsi and Bosch-Rexroth.

Maximum speed is electronically restricted to 18kph in the field but on the road it can shift seamlessly from  0 to 40kph.

Switching from road mode to field mode is done automatically at the touch of a button, with the unloading conveyor, 1m-wide ring elevator, bunker auger and other elements all folding simultaneously.

A sensor-controlled monitoring system stops collisions, says the company, and the entire folding process apparently happens 50% faster than on the previous model.

The massive 43cu m bunker on the Tiger swallows 30t of beet at a time. A 2m wide discharge conveyor means 10m-wide clamps can be made and unloading time is now down to 50sec with a full bunker.

Auto bunker filling, meanwhile, is controlled by two ultrasonic sensors that measure how much beet is on board.

A new cab mounted on hydraulic bushes gives a good view of the proceedings and includes a 12.1in touchscreen and there’s a heated seat to keep things comfortable.

The Tiger 5 is available from 2015 with the improved PR2h lifting unit in six, eight or nine rows and different row widths.

Norfolk-based Ropa importer CTM Harpley brought in the first Tiger in 2002. It sells about 20 Tigers and Panthers in an average year and reckons that anyone with more than 800-1,000ha of beet to harvest could justify the new Tiger 5 rather than the smaller Panther.

It depends on how the operator works, it says. The Panther gives controlled lifting, but will generally always work with a trailer, whereas the Tiger offers more flexibility for opening out a field on its own and working alone to build a clamp on the headland.

Price has not been revealed yet.