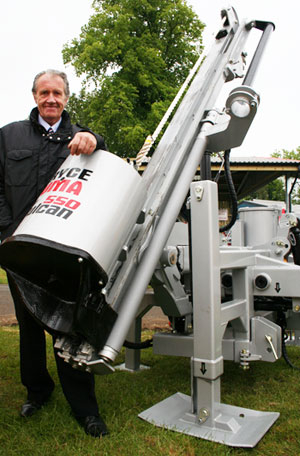 Contractors who want to give fence posts a heavier hit than existing Bryce Suma drivers can deliver now have a harder thumping option in the new Vulcan model, which drops a heavier hammer from a greater height.

“The hammer weighs 550kg instead of 400kg, it’s shorter so we can lift it a bit higher and the machine stands on longer hydraulic legs to further increase the drop,” says Jock Bryce.

Although transport height has stayed the same, drop height has actually increased from 3.6m to 3.75m and a bigger diameter rock spike – up from 95mm to 100mm diameter – matches the increased performance.

The Vulcan features Bryce’s patented Quadshift, which combines side and back-shift with a slewing motion that helps position the mast in awkward corners and close to obstructions. It also has four-way hydraulic mast adjustment to get it upright on uneven ground and there is a new option of a hook for the rock spike holder to pull out old posts with a chain.