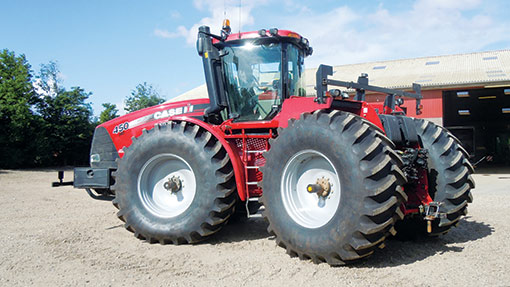 Fuel efficiency demands make tyre pressures  a big deal in modern-day farming and most of the major manufacturers have been flexing their rubber-making muscles in the past few months, as Oliver Mark reports.

Michelin demonstrated its firm belief that tyres are the way forward by launching its biggest flexible sidewall tractor tyre late last year – the AxioBib IF 900/65R46.

Michelin’s launch came just a few months after Bridgestone used its biggest tyre – the Firestone 850/75R42 – on a farm in Denmark for the first time. Four USA-made tyres and customised rims were fitted to a Case IH Steiger 450, which trimmed a total of 1,300kg from the old set-up.

That, combined with the lower 0.8bar inflation pressure, reduced compaction considerably in the top 40cm of soil, according to farm manager Kristian Kappel. The bigger footprint also avoided switching to dual wheels, which isn’t suited to the narrow Danish roads surrounding the farm.

Elsewhere, Firestone’s Tyre Pressure Calculator app has now been downloaded more than 30,000 times since its launch in 2011. Primarily aimed at British farmers, it has been used in 143 countries, including Germany, France, Afghanistan and the Middle East. 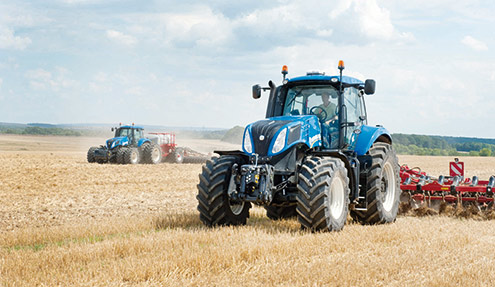 The company has appointed 28 of its UK and Ireland dealers as Trellebourg Professional Centres, with national coverage via a branch network of more than 70 outlets. Through these, farmer customers will have full access to on-hand advice and the maker’s technical knowledge in wheel and tyre set-ups and machine weighting, says the company.

As well as providing advice on tyre size and type selection, with a load/pressure chart supplied with all new tyres, dealers will also be able to call on Trelleborg’s own staff to come out to the farm and ensure that pressures and weights are such that the maximum performance can be extracted from the tyres.

The firm is also extending its tyre warranties to as much as seven years for farmer customers who are prepared to provide it with operating data records. These include annual workloads and the machinery the tractor is used with, which will help research and development in the future.

The Swedish company is one of the few in the agricultural tyre business focused solely on farm tyres, with no associated road tyre concern. It has a long history in agriculture implement tyres, and the purchase, in 2006, of Italian company Pirelli’s agricultural tyre business took it firmly into tractor tyre territory. It now has a complete tyre range, with a particular focus on high-horsepower tractors, and also manufactures its own wheel rims. 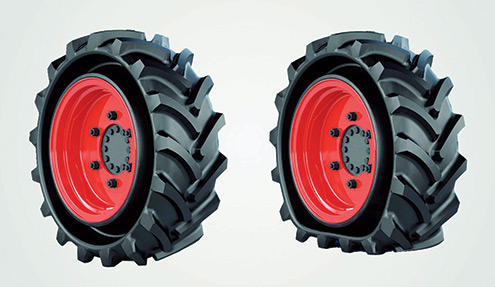 Mitas can claim the prize for the most radical tyre development of the past couple of years. The Pneutrac takes the best of both worlds by mashing together a tyre with a track to reduce compaction and improve traction.

The result is a 53% bigger footprint than a standard agricultural tyre and almost 50% more grip. Lateral stiffness is also higher, which means max road-going speed is 50kph, even at pressures as low as 0.6bar.

The tyre is designed to mount straight on a standard tractor rim, although the inner design is top secret and full production is still some time away.

This month also marked 10 years of Mitas producing Continental tyres. The Czech company has churned out more than 300,000t of Continental-branded tyres in the past decade and says demand has swayed noticeably towards high-horsepower machines over recent years.