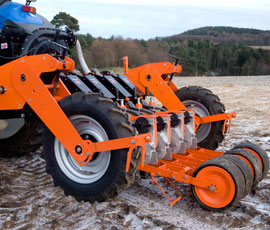 Since it was successfully purchased out of administration in March 2010, Stanhay Webb has undergone something of a turnaround.

While the British company remains privately owned, veg-and-root specialist Grimme’s appointment as sole distributor in 2010 has led to the company announcing a major sales jump during 2011 and into the New Year.

The last 12 months saw 20 drills sold, with a further 18 ordered for delivery in early 2012. All sales and technical support is run through Grimme’s Ladybank depot.

Design and manufacture of the precision seed drills has relocated to new premises in Grantham, Lincolnshire, where Stanhay is developing its range of products which run from hand-pushed seeders to multi-line triple-bed units.

Grimme has so far invested £400,000 in spare parts which are stored at its Swinehead headquarters in Lincolnshire, from where the company hopes to run a next-day parts delivery service. A further £175,000 worth of spare parts for both old and new seeders are due next year.