Same Deutz-Fahr reasons that a tractor’s clutch can be a weak element in a transmission and as such now favours stepless CVT gearboxes.

The company is set to introduce a CVT option for its sub 100hp tractors and, at the other extreme, says it has plans for a 400hp tractor which will also be offered with such a transmission.

Clutch maintenance issues aside, SDF points out that advanced control systems for CVTs means that output can be optimised in terms of engine speed, fuel consumption and power availability.

The first sub 100hp tractors with a CVT box – claimed to be an in house development – are due to be available later this year. 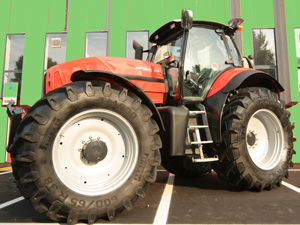 First sight of the Same 270 Diamond tractor which made its debut appearance at the manufacturer’s 80th anniversary celebrations held in Treviglio, Italy recently. Rated at 269hp, the new tractor has a 50kph, 40 x 40 box with powershift and is more-or-less the same in all but colour as the Deutz Fahr Agrotron X720 (see FW p70 8th June 2007).

Front axle and cab suspension are included in the specification. Requiring no small degree of athleticism to climb up into the cab, this monster is shod on 38in tyres on the front and 42in on the rear.