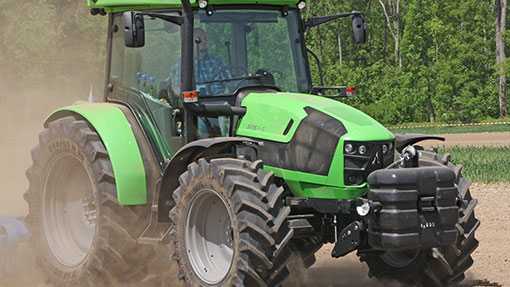 Same Deutz-Fahr has expanded its 5 Series tractor range with the launch of the 5G and 5D series. Andy Collings reports.

Drive around the UK countryside and you could be forgiven for thinking that all tractors are now hulking great machines with 150hp or more under the bonnet. However across Europe the 80-120hp range still accounts for a quarter of all tractor sales in Europe.

So it’s no surprise that Same Deutz-Fahr is still looking to broaden its range of models in this sector and provide a replacement for its Agrofarm and Agroplus ranges.

The newly-minted 5G and 5D Series tractors also get SDF’s FarMotion engines – Tier 4i modular three- and four-cylinder engines designed to combine compact dimensions with a high power output. In fact, the 109hp 5115.4, which tops out the 5G line-up, has a wheelbase of 2.4m and weighs in at just 4,200kg.

The four models in the 5D Series go from 75hp to 102hp with a choice of a three- or four-cylinder FarMotion engine for the two mid-range 88hp models. Deutz-Fahr has also included three Ecoline versions which are not offered with the Stop-Go, Comfort Clutch or Sense Clutch systems that are available as standard on GS builds.

When differences in weight, wheelbase, height and lift capacity are taken into account there are 11 models on offer in the 5G Series.

Transmission options include both mechanical and powershift boxes with up to 60 gear ratios along with Stop & Go, four pto speeds and four-wheel braking.

The operator, meanwhile, gets a four-pillar cab with improved air ventilation and a new control layout. A suspended seat is provided as standard as is a small passenger seat.


Want to find out how much your tractor's worth?