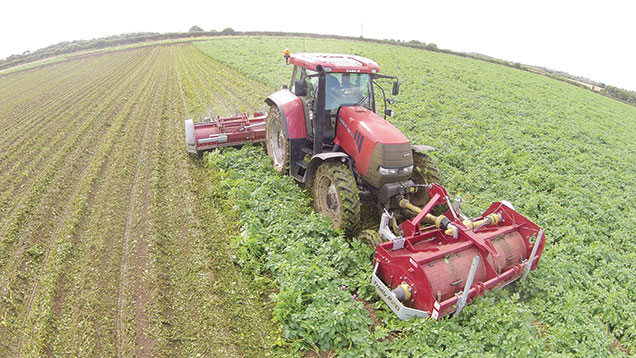 Lincolnshire firm Scotts Potato Machinery has updated its Trinity 6000 haulm topper. Originally designed in 2008, the 2015 version has been upgraded to improve performance and to withstand the ever-increasing horsepower of current tractors.

The previous model was a solid performer, says the company’s boss Derek Scott, and has won over growers and contractors with its ease of use and unparalleled flailing action. However, with the increased popularity of flailing in place of desiccants,  these types of machine are being worked increasingly hard year on year.

Key features remain, including what the company claims is the longest variation of flail length in the market for this type of machine. Also, a floating parallelogram action on the rear units allows each topper to move up and down freely over varying contours, plus hydraulic folding to within 3m for roadwork.

Upgrades for 2015 include rear topper unit drive shafts and bearings increased from 35mm to 45mm to withstand higher horsepower. Also, replaceable steel liners are now fitted inside all hoods to protect them from constant “washing” of green haulm and subsequent wear in abrasive soils.

Heavier duty depth control wheels with greater range of adjustment are now fitted to protect them from accidental damage when turning on uneven headlands. There’s also a redesigned Ridgepress roller kit which is now said to be more adjustable to suit a greater range of conditions.

Finally, says the company, there’s an increased ply rating on the rubber skirts, both for health and safety reasons and to prolong the life of what are inevitably vulnerable parts of this sort of machine.