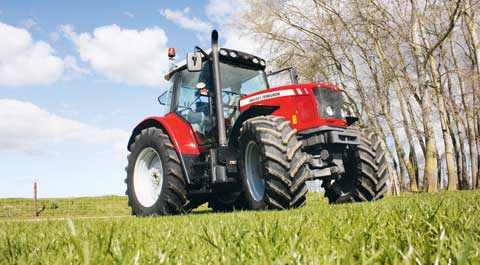 Finding a good second-hand loader tractor can be a tricky task. But with some expert advice, Nick Fone sniffs out some sound performers.

We’ve been in search of a tractor around the 110hp-130hp mark. But we’re taking a broad view on price, just to see what’s on offer.

The yard of second-hand specialist Richard Parris has lots on offer – all the colours of the rainbow, in fact.

So, with some expert advice from Mr Parris, we set about finding four good ‘uns.

Although all our contenders differ in a number of ways, there are still a range of common things to look out for.

First up it’s the front axle. With the extra strain a loader can put through the front-end, the weight-bearing parts of the axle bear the brunt.

Most obviously look for signs of grease around the main pivot points and bearings. If they’re dry, and clearly have been for some time, then it’s a good indicator that maintenance hasn’t been high on the priority list for the previous owner.

Due to the extra stress exerted by a loader and the type of environment they are expected to work in, wheel-rims can often take a hammering. Muck, slurry and gate posts all contribute to corroding, buckling and rotting out rims and, over time, shock loads take their toll on lugs and centre dishes.

Look out for cracks and welding here and factor in at least £200 a rim for replacements on the front end.

Loader tractors that have been run without back-end ballast can suffer from excessive rear-end rubber wear.

It’s standard stuff around to the rear of all these tractors. Look out for worn trailer hitches and bent or broken linkage parts.

Often first impressions are right. If it looks like a machine has done a six-month tour in Helmand province, steer well clear.

All four of our contenders would be fairly obvious candidates for a loader. Tractors of this vintage kitted out with one will generally attract £4,000-£5,000 more than one those without.

Be prepared to pay £200-£300 more for a loader fitted with suspension. This small extra pays dividends in the long run, not only making for a smoother ride, but taking the stress and strain out of everyday work for the tractor.

To check everything is working as it should, lift the loader a foot or so off the ground and bounce up and down on the carriage. The damping effect should be fairly obvious, but if it is absent, it’s rarely a major drama – the accumulator spheres may just need a re-charge.

To check for general wear-and-tear, park the tractor on level ground, slowly drop the jib on to the deck and check to see the carriage lands squarely on the ground. At the same time, look out for slop in the pins at the base of the main lift-rams – these tend to suffer most abuse.

Similarly, rock the attachment carriage back and forwards – any slack here will be easy to spot.

Examine the cast yokes that connect the carriage to the crowd rams – these can crack. Finally, check that the locking pins (and their carrier-rams) run smoothly to-and-fro.

Self-levelling is a now common feature and one that makes life that little bit easier around the yard. Be prepared to pay another £200-£300 for a machine equipped with this.

From 2007, Case divided its 100hp to 140hp Maxxum range down the middle, with two distinct spec levels – Multicontroller and X-Line. 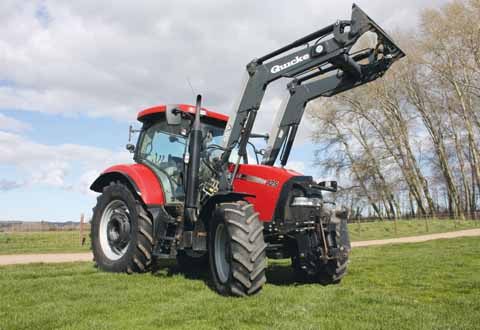 While the former enjoyed more sophistication, including electronically-governed common-rail engines with a power boost, X-line versions had simpler mechanical fuel injection and fewer bells and whistles.

Both came with four and six-cylinder power-plants produced by the European Engine Alliance, which included Cummins, Iveco and Case New Holland.

The model in question here is the second most powerful in the line-up – the simple-spec M125 X-Line.

The engines give little trouble and the transmission is about as high spec as you’ll find on any tractor of this size – eight powershift steps at the touch of a button, interrupted only by one mechanical range change to give 16 forward speeds and 16 in reverse.

The big four-post cab on these tractors is a pleasant enough place to spend your day if you can do without side windows – plexi-glass roof window a bonus for loader work.

Although an option, cab suspension is pretty much standard, whereas front-axle springing is less common (this can add £2,000-£2,500 to the purchase price.) 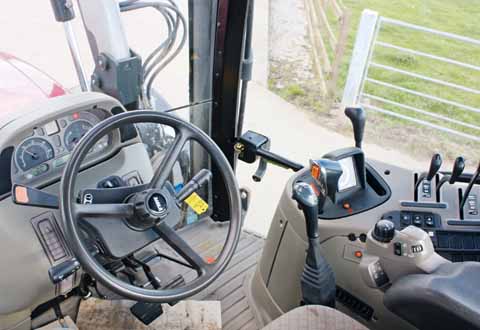 Case cabin is a big, airy pleasant place to spend the day, if you can do without side windows.

It’s unusual to find both a front linkage and a loader together on a tractor of this size. Providing they don’t clash in work, expect the linkage to add somewhat to the tractor’s value.

But when the 20-series was introduced, it brought with it new electronics, especially around the engine bay. That put some people off, which means they can work out cheaper pound-for-pound than their predecessors and successors.

Many farmers reckon the 10-series Deeres are some of the best tractors the company has built. With such legendary status, their second-hand prices can end up inflated accordingly. 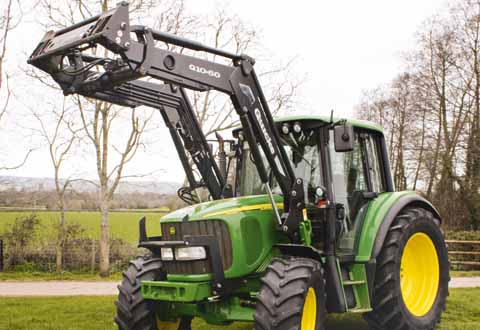 30-series models attract strong money on account of their youthfulness so the 20s fall somewhere in between the two, making them probably the best in terms of value for money.

The cab is standard stuff with switches, dials and levers dealing with nearly everything.

This tractor is fairly standard with a mechanically-sprung seat and rigid front axle. While an air seat isn’t likely to add much to the price, TLS front suspension will notch it up a further £2,000-£3,000.

Parris pointer: “A bomb-proof straightforward loader tractor that will hold its value like nothing else.” 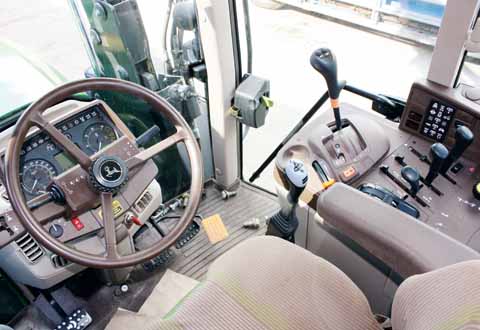 Beige trim of the John Deere cabin will be familiar to most. Quicke joystick tucks neatly alongside the seat.

Definitely at the top end of the scale, both in price and sophistication, 300-series Varios have become increasingly popular as loader tractors over recent years. 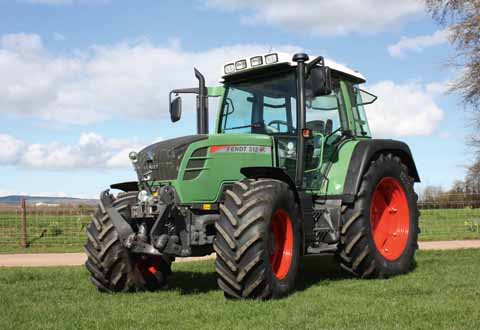 Having a stepless CVT gearbox means that (in pedal mode) they can be driven like a hydrostatic telehandler or loading shovel, making it easy to perform ultra-precise moves and inch up to attachments.

And, because there is no clutch to burn out, maintenance is not the issue it can be with mechanical boxes.

That said, it is a complex setup, so should something go wrong, you can bet it’ll be expensive.

Unlike larger Fendts, getting the tractor moving isn’t a complex process though. There’s no computer screen to meddle with or banks of aircraft-style switchgear – just a simple golf-ball-style knob for speed selection and a panel of blister-pad buttons. 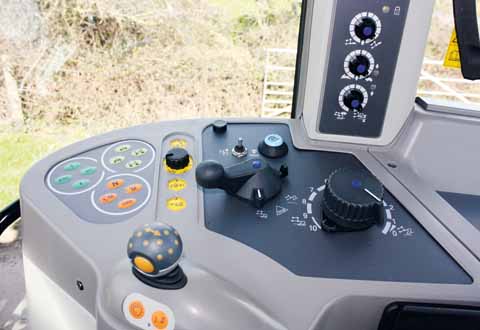 Unlike larger Fendts – 300-series Varios keep things simple with a single golf-ball style knob as a speed control and simple blister buttons for nearly everything else.

The downsides? The cab’s not as big as the competition’s and, lacking a neutral position, the shuttle flip switch won’t be to everyone’s liking.

Parris pointer: “Expensive to buy in the first place but not necessarily expensive to run.” 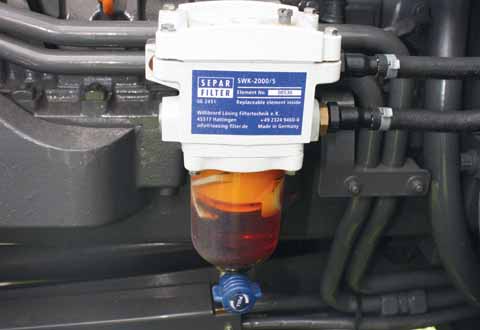 This tractor has had an additional fuel filter fitted which will offer extra protection from dirt and debris for the sensitive injection system.

That then makes the latter a good choice for anyone looking for a lightweight powerhouse. 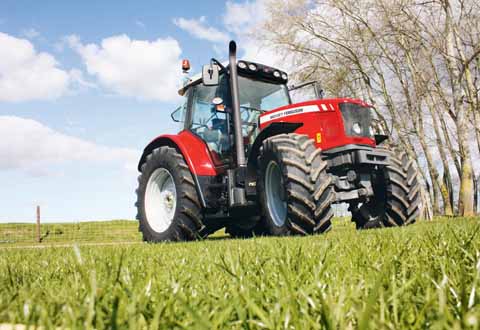 Massey’s four-speed powershift with four powered range changes means you can run right up from gears 1 to 16 without having to touch the clutch. However, expect delays at 4-5, 8-9 and 12-13.

There is no stick-shift mechanical option for Masseys of such recent vintage, but the shuttle is a firm favourite with Fergie devotees as it can be used to dump the clutch, as well as notch up and down through the powershift steps.

Optional closed-centre, load-sensing hydraulics make this particular tractor a good choice for fast loader work (a Quicke Q56 to fit the 5480 will set you back £6,500) and the ability to switch off the front axle suspension is a bonus for stability, particularly when stretching to full-reach. 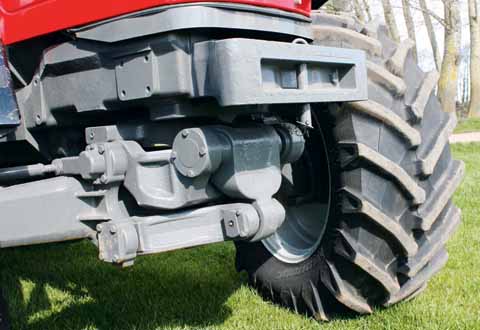 Chunky-looking front-axle suspension set-up can be switched on and off for greater stability with the loader at maximum reach.

Parris pointer: “This is a compact, straightforward tractor that anyone can jump on and make the most of.” 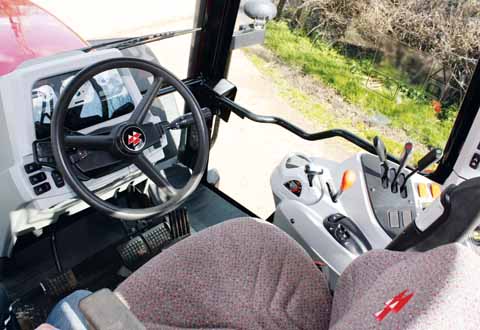 The 5480 cab is kept simple with a T-bar lever and standard shuttle doubling up on control duties for the lever-free transmission.