At first sight, the task of finding a driveable 150hp tractor with a price tag of £30,000 looked to be a big challenge.

“You’ll not get much for that,” was the less-than-encouraging comment made by more than one tractor dealer. However, we did manage eventually to track down a handful of tractors which were in the 150hp ‘ish’ zone if not exactly on the button.

Similarly, when it came to price, some embellishment was needed but, in the main, the required £30,000 region was achieved – well, as close as makes little if any difference. 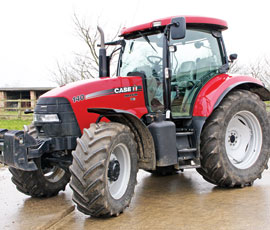 First in the frame is a Case-IH Maxxum 140 Multicontroller. This tractor had 07 plates and had clocked up 3300 hours during a working life which the man at this north Oxfordshire dealership explained had comprised only light arable work and trailer haulage.

The tidy, cared-for condition of the 140 indicated its life had not been too arduous – the paintwork was in good condition and the tyres had about 60% left.

With an asking price of £31,000 this was just about in budget, but what were you getting for your money?

The Case Maxxum 140 Multicontroller is powered by a six-cylinder turbocharged and intercooled engine using common rail fuel injection and electronic fuel management. All of which allows its rated 141hp to be boosted to 178hp (the higher power only available when using the pto or when in the higher ratio transport gears).

Included in the specification is cab and front axle suspension, front weights and telescoping pick-up hitch.

Overall, this is a tidy tractor which has all the latest add-ons and looks as if it has been well maintained. 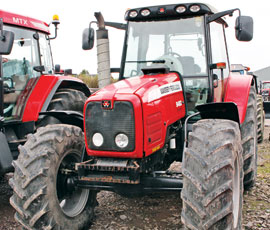 The condition of this 04 plated tractor is fair, although there are signs that there have been tough operating conditions. At the front, the side panels struggle to meet up with the dented radiator grille and the health of the headlights is in doubt. The top of the exhaust stack is well past its best and now looks more like the steam stack on Stephenson’s Rocket.

There are no obvious problems with the engine block in terms of leaking gaskets and the engine oil, while being black, looks reasonably fresh and smooth.

Up in the cab, there is no more wear than one would expect after more than 4000 hours use – no rips in the seat or deformed or loose controls. In fact the cab is in reasonable condition.

A tour around the back revealed a linkage with a 4250kg lift capacity, four spool valves and a pto with a 1000 rpm spline in place. The pto also provides 540 and 540E.

This 6480 is not quite ready for confinement to general yard duties, but is clearly bordering on it. At £26,000 it could find a good home on a mixed farm. 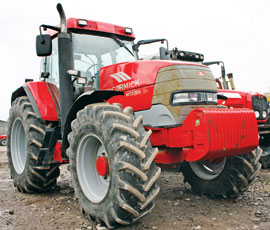 First sight of this McCormick MTX 150 suggests good health and well-being. While we couldn’t vouch for the condition of its interior workings, the condition of the exterior would suggest it was in fine fettle.

With 3000 hours on its clock, the expected chafes and scuffs are present – the bonnet grille has not had a life totally free of impacts and there is a growing area of superficial rust.

Against this, the tyres still have a good depth of rubber and the cab is clean and well maintained – the only visible scar being a severely cracked wing mirror.

With a price tag of £25,000, this MTX 150 has a 07 plate. Power is provided by a six-cylinder, turbocharged and intercooled engine rated at 152hp. In the transmission department, a four speed powershift gives the operator a selection of 16 forward and 12 reverse ratios.

The rear hydraulic linkage has a lift of 6600kg and, usefully, there are six spool valves. On this model there is a pick-up hook and, at the front, a full set of weights.

This is clearly a tractor that still has something to offer and, compared to tractors with a similar power and clocked hours, appears to be attractively priced. 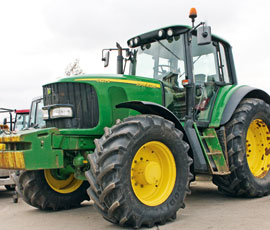 The 6920S on sale here was registered in 2004 and is fitted with electronically controlled, self-levelling hydraulic cab suspension along with TLS front axle suspension.

And in terms of extras, this tractor is also equipped with a compressor to operate trailer airbrakes.

With 3775 hours on its clock, its overall condition is fair to good – rusting wheel hubs being its biggest visual downer.

The AutoQuad 11, 50kph transmission is fitted as standard in the 6920S – it is better suited to heavier field operations, says the manufacturer. Similar in operation to the PowrQuad Plus 20×20 speed matching transmission used in smaller 20 Series tractors, AutoQuad also features automatic shifting and cruise control.

A clean, well-maintained cab and controls include a headland management system. The seats are intact and there are no areas of heavy wear. 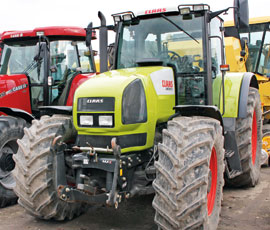 The most expensive tractor in our selection, the This Claas Ares 816RZ was registered in 2007. Compared to the other tractors we looked at, this tractor has relatively low hours at only 1350 recorded.

Under the bonnet is a DPS 6068 TRT, 6.8-litre turbocharged engine rated at 156hp which drives through a transmission offering 32×32 ratios.

One of the better known legacies of the Renault regime is the cab and axle suspension systems – Renault made big noises about them and the company set new standards in operator comfort.

Tidy and well maintained, this Claas Ares 816RZ tractor can look forward to a few more years down on the farm.