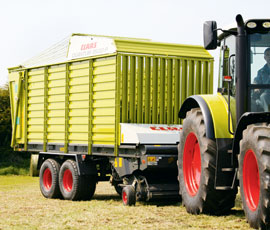 Since the previous Grassland & Muck Event, there has been something of a merry-go-round of changes amongst suppliers of self-loading forage wagons as manufacturers have set out to secure a footing in an increasingly important sector of the grass equipment market.

First, Lely entered the picture by snapping up the assets of the German Mengele company and relaunching that company’s wagons under the Tigo name through its own UK distributor and dealer network.

Next, independent importer Reco negotiated terms to handle the Strautmann range as a replacement for the Mengele machines it handled previously; and finally Kverneland also joined the forage wagon market by acquiring all rights to the Dutch-built Veenhuis models.

Together with new model introductions from Krone and Pöttinger and ongoing interest in the sector by Claas and Schuitemaker, it means plenty of changes will be evident on the working plots at this year’s Grassland & Muck Event.

Product development has largely focused on productivity – in particular on ways of getting grass into forage wagons faster and more efficiently so that they can run down swaths at an even quicker pace.

Nothing can be done to reduce travel times between field and yard – which is the most critical factor affecting overall work rate – so reducing the time taken to get a load on board is one of the few avenues for improvement.

In future, that may involve a degree of automation, as demonstrated by a project devised by John Deere and Pöttinger to develop an ultrasonic scanning system mounted on the front of the tractor to monitor changes in the size and density of the grass swath.

This information, together with data from the torque sensor that Pöttinger Jumbo operators can already use to fine tune the automatic loading system, is combined to regulate the tractor’s forward speed and rate of acceleration.

The technology aims to ease the operator’s workload while either optimising productivity or reducing fuel use and general wear and tear by keeping the working speed as consistent as possible. Having sufficient computer processing capacity to send this sort of data also makes yield recording and mapping a possibility. Automation at a less technologically advanced level – but of significant practical and economic benefit – is already available from Pöttinger in the shape of the Autocut on-board knife sharpening system.

At present, operators must spend time replacing knives with a freshly sharpened set – ideally every day in order to keep the cutting mechanism in peak condition. Pushing grass across sharp knives takes as much as 15% less power than with dull ones, so knife sharpness has a significant impact on daily fuel consumption.

Autocut saves having to replace dull blades and spend time sharpening them in the workshop. It puts a keen edge on a set of 45 blades in barely 12 minutes and is fully automated, involving little more than the press of a button at the side of the wagon.

A first pass with the rotating stone cleans the blades; the operator can then initiate two or three further passes to sharpen them. This ‘little and often’ approach avoids the risk of overheating the metal and destroying the hard-wearing properties of case hardening.

Calculations over a 300-hour workload suggest fuel savings alone should be sufficient to recoup the cost of the system in two-and-a-half seasons – with the added benefit that the grass is always cut cleanly.

A key feature of the new AX and MX series forage wagons from Krone is a floor that slopes down at the front of the transport box by up to 25cm. This simply means that grass does not have to be pushed so far to get it into the storage compartment – and that has a significant impact on power requirement, says the manufacturer.

The sloping design also encourages the first grass into the machine to build up instead of tumbling off the pile, making it easier to fill the machine to maximum capacity. A pre-compression sensor installed in addition to the regular top panel sensing is also said to help in this respect – and it is load density, not merely the volume of the box, that determines how much grass is hauled with every load.

The most recent additions to the range in the UK are the 35cu m MX 350 and 31cu m MX 320. These dual-purpose wagons have bodywork strong enough that no cross supports are needed, so in addition to operating as a pick-up wagon collecting grass swaths, they can also run alongside a forage harvester in maize.

Both have a 1.8m-wide cam-free pick-up feeding an 880mm diameter feed-and-cut rotor with spur gear drive. This new rotor has tines arranged in an eight-row spiral and are welded to the rotor tube for maximum strength.

A full set of 41 crop slicing knives produces a nominal minimum chop length of 37mm and the complete knife assembly can be lowered and swung out to one side for maintenance access.

Faster work rates and up to 10% fuel saving are claimed for the more radical front-end redesign of a forage wagon’s pick-up seen on latest Strautmann machines.

The Continuous Flow System (CFS) comprises a shallower pick-up reel with a pivot set lower so that the assembly can respond more effectively to dips and bumps in the field surface. Tines are arranged in six spiral rows rather than straight lines – which is possible because there is no cam track to control their angle.

Next comes a spiral-profiled roller, which is designed to spread grass across the full width of the intake if it comes from a narrower swath. It also accelerates crop off the pick-up reel as it heads to the large intake rotor.

Installing the roller also allows the rotor to be positioned 10cm higher than before, which shortens the distance that grass has to be pushed before it tumbles into the storage box.

First introduced on the high-spec Strautmann Giga-Vitesse forage wagons, the Continuous Flow System feed assembly is also now available on the medium-spec Super-Vitesse as an alternative to the original pick-up and feed assembly.

Up to 20% increase in performance is claimed for latest versions of the Pöttinger Jumbo self-loading silage wagon thanks to front-end improvements.

For one thing, the 2m wide pick-up reel is a new eight-row design that can cope with faster forward speeds. For another, re-profiling the housing between the pick-up reel and intake rotor is said to result in a smoother transfer of material from one to the other.

The rotor itself is of a modified design driven by an uprated bevel gearbox and shaft transmission rated to 2500Nm of torque and said to be capable of handling the output of tractors up to 450hp.

Operators will be able to make tight turns with a big tractor as a result of redesigning the hydraulic suspension drawbar.

The regular Jumbo self-loading wagon range is now matched by the Combiline version, which has self-supporting bodywork making it suitable to take forage from a chopper, with the introduction of the 10010 model at 47.3cu m capacity.

This machine’s reinforced scraper floor conveyor is shared with the 40.8cu m Jumbo 7210 Combiline as an upgrade for the smaller model, with hydraulic motors driving the floor conveyor up to 70% faster than before, which on the 7210 reduces typical unloading times from 70 seconds to just 40 seconds.