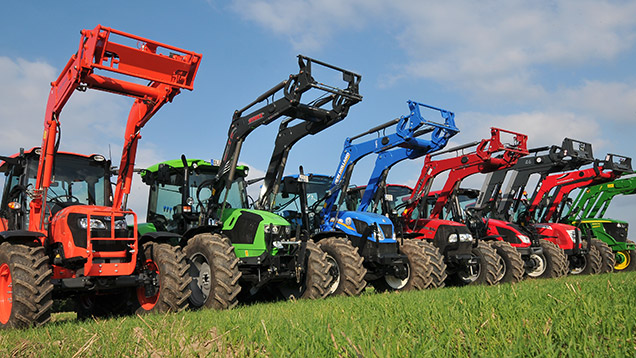 A mid-sized loader tractor still offers mixed farmers the most affordable combination of farmyard dogsbody and in-field workhorse. Farmers Weekly spent a week in Germany comparing seven of them.

An old farming favourite – the 100hp loader tractor – is the subject of this year’s tractor test. It’s a power bracket in which there’s no shortage of choice, with more than a dozen well-established brands in the UK as well as a bunch of curiously named Asian and eastern European marques desperate for a lucrative slice of the market.

This time around we set a budget for the manufacturers. Our £60,000 (€75,000) had to get us 100hp, four-wheel drive and a front loader. The manufacturers were free to spec the rest of the tractor as they liked without straying above our cash limit.

This created some interesting outcomes. One look at the difference in results between Case-IH and New Holland – two tractors created from the same pool of component parts – shows that getting your spec right is just as important as picking the brand in the first place. To squeeze within our budget some manufacturers had to ditch features you’d find as standard in the UK, such as air-conditioning, a passenger seat and bigger hydraulic pump.

Of course, real market prices will come in a good deal lower than the list prices we quote, which have been converted from German calculations. You can realistically expect to save 15-30% depending on your bartering skills or, alternatively, dip into the second-hand market and save a lot more.

As ever, we had the tractors sent to our test farm in Nordwalde, western Germany.

We spent a week testing them alongside our colleagues from Germany, France and the Netherlands, before Maha did the more scientific tests involving fuel consumption.

Each team had a designated implement, which it used on each tractor in turn. This year’s tasks included:

There were a couple of big names missing, including Massey Ferguson and Claas, that either didn’t have a machine to suit the test or were in the process of launching a new one. Fendt, unsurprisingly, couldn’t get near the budget without delivering half a tractor.