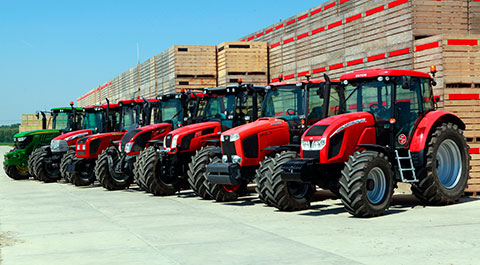 It might not be the quickest growing sector, but 100-150hp tractors probably appeal to the biggest farming audience. Oliver Mark joined colleagues from France, Germany and Holland to test seven candidates in this power sector.

Click on the images below to see test results for each tractor:

Minsk, Belarus, is the base for Belarus tractors and they are bought into the UK by Browns of Liversedge in west Yorkshire. The firm brings in models from 90-140hp, although the Belarusians build tractors up to 300hp.

Engine makes vary from the basic Minsk-made MMZ to Cummins and the more popular (but also expensive) Deutz. Basic transmissions are most common, but Belarus also has a prototype electric drive tractor.

The M-series is John Deere’s basic small-to-mid-sized tractor offering. Assembled at Deere’s European base in Mannheim, Germany, the range was first announced in October last year and went on sale two months later.

Six models make up the range that extends from 115-170hp, with either a 4.5-litre of 6.8-litre PowerTech engine providing the power. Transmission options are based around Deere’s PowrQuad semi-powershift gearbox.

Five models make up the 2012-launched Forterra range. The tractors are built at Zetor’s base in Brno, Czech Republic, and power output starts at 100hp and tops out at 140hp.

All the tractors use the same 4.2-litre Zetor-made engine and things are equally simple in the transmission department – a three-speed automatic powershift with 30 gears and a top speed of 40kph is the only option.

The three-model Virtus range starts with the 99hp Virtus 100 and tops out with the 120 version we tested. All the tractors use the same 3.6-litre Deutz powerplant and are built in Treviglio, northern Italy.

The range was launched in June last year as part of a major rebranding exercise for Same. There are a host of transmission options but only the 30×30 powershifter and basic 10×10 gearboxes are marketed in the UK.

Built at Argo’s tractor factory in Fabbrico, northern Italy, the four-model range was launched back in 2011 and extends from 92-126hp. The three smallest models use a 4.4-litre Perkins with mechanical injection, while the flagship X60.50 uses a common rail version.

All have 40kph transmissions and 36 forward speeds and there’s an optional creeper to add an extra 12.

Kubota’s M-GX range debuted in the UK at Cereals in 2012. Just two models make up the Osaka-built series, with the M110GX joined by the flagship 135hp version – currently the biggest tractor that the Japanese firm builds.

Both use Kubota-made motors but while our test version has a 3.8-litre four-pot the bigger tractor has a 6.1-litre. In the transmission department semi-powershifts are the only option.

The Finnish-made N-series got its first UK outing at Lamma 2012 and includes seven different models. Power extends from 99-171hp, with engines provided by Agco Power.

There are five gearbox choices, including the recently-launched HiTech 5 we tested, as well as Valtra’s Direct stepless ‘box. The former uses 20 speeds split into four gears and five powershift steps.

These tractors are likely to spend their time, in the UK at least, with a front loader hanging off the nose. So manoeuvrability, visibility and ease of use were some of the most important criteria.

The quiet McCormick set itself apart from the rest in this department. At 10.7m it was the tightest turner, had the shortest wheelbase and the best forwards visibility from the front seat thanks to its short, droopy bonnet.

Deere found itself at the other end of the scale. Its hulky frame made for poor forward visibility, while the 12.5m turning circle won’t be practical for small livestock farms.

Powerplant performance is also key if these tractors are going to be decent all-rounders. Testing specialist Maha attached its dyno to each tractor to find out the maximum power output at the pto shaft (pto losses are pretty low so this is a good way to measure engine output). The results ranged from 89hp on the under-powered Kubota to almost 113hp from Valtra’s Agco Power block.

Engine torque is also an important consideration if you’re going to be doing a mix of farming work. Kubota disappointed here, too, mustering just 317Nm compared to the John Deere’s top-scoring 479Nm. It’s worth mentioning the McCormick as well, as its impressive 469Nm max engine torque came at a frugal 1,251rpm.

Most makers plump for a semi-powershift gearbox in this power bracket. Belarus was the only one to break the mould with its shuttleless set-up, which managed to baffle most of the test team. The Zetor had a hydraulic shuttle while the rest went for electric controls.

Valtra’s 20-speed HiTech 5 gearbox proved the easiest to use and laid claim to the best shuttle stick, while the McCormick provided the biggest choice of gears in the working range from 4-14kph with 19.

These are stockman-type tractors so comfort is hardly the number one priority. But it remains important and Deere delivered its usual good quality finish to level with Same and McCormick in this section.

It was the red-liveried Italian that was the quietest, too – measuring 69.4dBa to pip the Deere to the post. But when it came to road travel the green machine won thanks to its front axle suspension and smooth gear shifts.

We also took a look at linkage, hydraulics, four-wheel drive and diff-lock functions. Our test gang didn’t share quite the number of automatic functions you’d expect from out-and-out tillage tractors, but there were still plenty of automatics on offer.

Rear lift ranged from Same’s 4,680kg to the 8,990kg that made Valtra the Hulk Hogan of the test. The two Italians – McCormick and Same – along with the Belarus were bottom of the hydraulic pack and were just over half the Green Giant’s 110-litres/min. 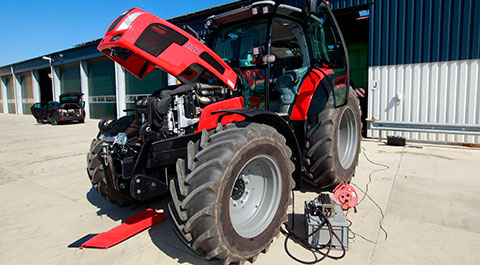 How we scored them