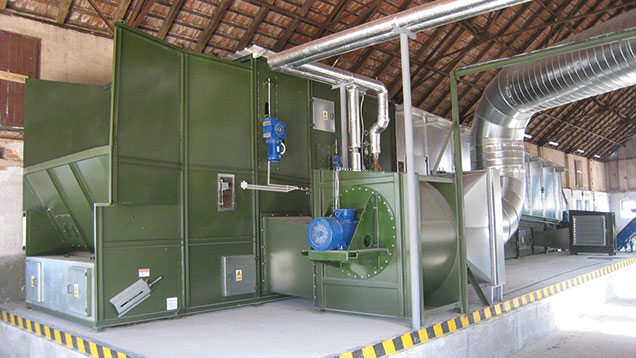 Before starting the farm machinery company that bears his name, Alvan Blanch enjoyed a brief but successful career as an agricultural contractor and sheep shearer.

Because of his sheep-shearing skill Alvan Blanch became the chief demonstrator for Lister, Britain’s leading manufacturer of sheep-shearing equipment, and in 1938 he took part in an early TV-farming programme on the subject.

See also: Read all the other Best of British articles

His long-term interest was engineering and he started machinery manufacturing in 1946, designing and making hay equipment.

His machines were successful, selling locally and then nationally, and in 1952 he formed Alvan Blanch Development Co. Putting “development” in the name was an early indication of the innovative approach his company would follow.

Another feature of Alvan Blanch’s approach to business expansion was the emphasis on exports, starting at an early stage in the company’s history.

Mr Blanch maintained a personal interest in developing overseas markets, travelling extensively, and this encouraged his ideas for developing machines specifically for export, some of them for crops not grown in the UK.

The results of the company’s export activity included an OBE awarded to Mr Blanch for his “services to international trade”.

Exporting remains an important factor in the company’s success under Alvan’s son Andrew, who now runs the company, with more than 80% of turnover generated from selling a range of specialist crop-processing technologies to about 100 countries.

Most of the UK sales are grain drying, handling and storage equipment.

There is also a range of feed-preparation machines including mixers plus roller and hammer mills.

Alvan Blanch is one of Europe’s leading manufacturers of continuous grain dryers including the recently updated Double-Flow series, said to be the UK’s top-selling continuous flow range with 6-60t/hr input capacities based on wheat dried from 20-15%.

The multipurpose CD conveyor dryers offer the versatility to deal with non-granular products including digestate, paper sludge and wood waste as well as grain.

They are suited to renewable heat incentive credits because, unlike most dryers for non-granular materials, they heat at a lower temperature and are suitable for low-grade heat recovery from boilers, and they are achieving dramatic sales growth overseas and, increasingly, in the UK.

Investing £3m in automated production and factory extension over the past three years is helping to meet sales growth totalling about 100% over four years as well as maintaining the company’s competitive position in world markets.