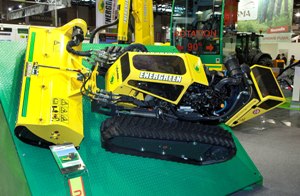 A heavy duty, radio-controlled fail mower that tackles slopes up to 55 degrees has been launched by Italian firm Energreen.
The Robogreen has a 130cm flail head mounted on the front of a tracked machine with a three pot Isuzu diesel developing 40hp. The flail head can be fitted with light or heavy-duty flails and can chew through thick scrub as well as grass.
A self-cleaning fan keeps the radiator clear of debris and the rubber tracks can be fitted with metal spikes to improve grip on steeper slopes. The engine lubrication system has also been modified to allow safe operation on steep banks.
All operation is controlled via a hand-held remote with a 300m range which displays instrument readings on a screen.
Top speed is 7km/hr and it costs €40,000. The firm said the flail could be removed and replaced with other implements such as a rotovator head
SIMA 2011