In this instalment, we present some of the show’s most interesting tractors, sprayers, drones and ploughs. 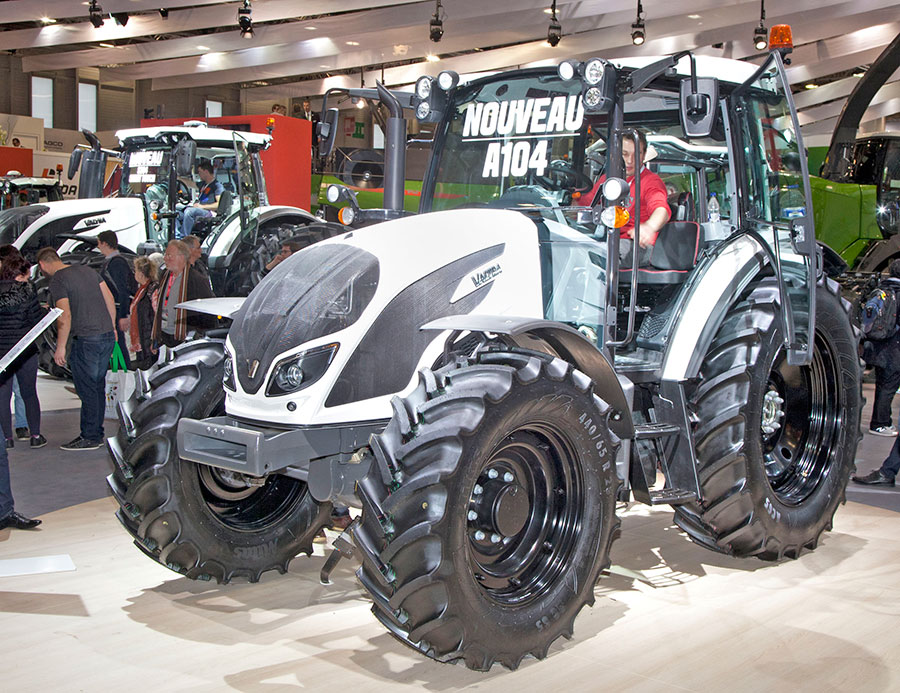 Valtra has shaken things up at the base of its tractor range with the launch of a fourth-generation A-series largely based on the 4700, 5700 and 6700 global tractor models from sister brand Massey Ferguson (MF).

The idea is components are sourced from around the world before the MF version is dressed-up in its Beauvais base, France, and the Valtras get bolted together at the firm’s factory in Suolahti, Finland.

On the engine side of things, the three smaller models get a 3.3-litre, Chinese-built Agco power block, while the four bigger ones have a 4.4-litre lump.

Outputs stretch from 75-130hp and for simplicity, there is only a 12-speed transmission, which means there are no powershift steps.

They’re likely to be added further down the line, though.

The other big news on the Valtra stand was a long-awaited upgrade for the tired-looking in-cab control screen.

A 9in monitor is a giant step forward for the maker, which has traditionally played third fiddle to fellow Agco brands Fendt and Massey Ferguson in the technology department.

The system uses Valtra’s own software and sees all the controls mounted on a redesigned armrest, which now includes a palm-fitting joystick.

Initially, the screen has been fitted to the big S-series that tops out just beyond the 400hp mark, but will likely be on the T-series by the end of the year and the N-series sometime after that. 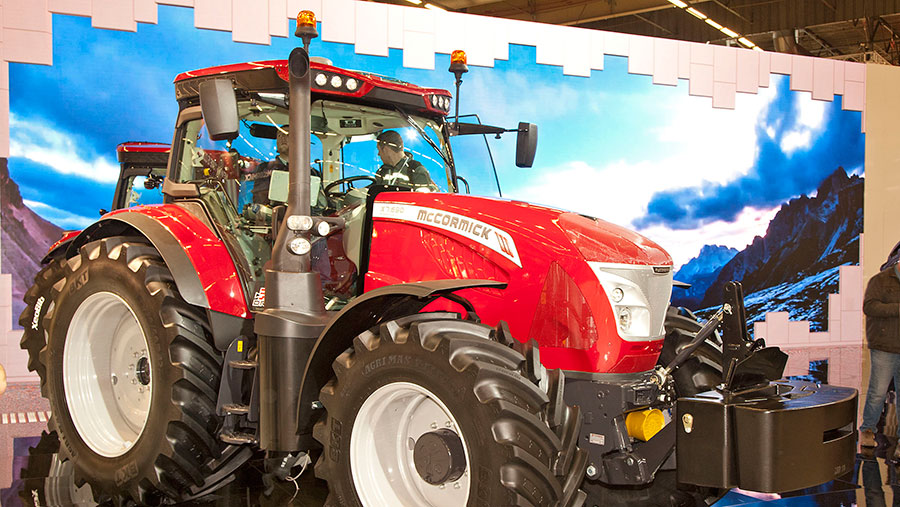 A second-generation range of McCormick’s six-cylinder X7 Series tractors got its official unveiling at the show.

The biggest news for the PS-Drive machines is an upgrade on the FPT oil-burner that sees it tick all the boxes for Stage 4 emission regs.

The range has also been bulked out to five models after the more powerful X7.690 joined the ranks, taking output up to 226hp from its current 212hp power ceiling.

In addition to VT-Drive stepless transmission versions up to 195hp, all models will be available with a new semi-powershift transmission from ZF providing an increased number of speeds from a combination of five ranges and six powershift steps.

See also: Watch the video of the 2016 Farmers Apprentices testing their driving abilities with a state-of-the-art New Holland tractor 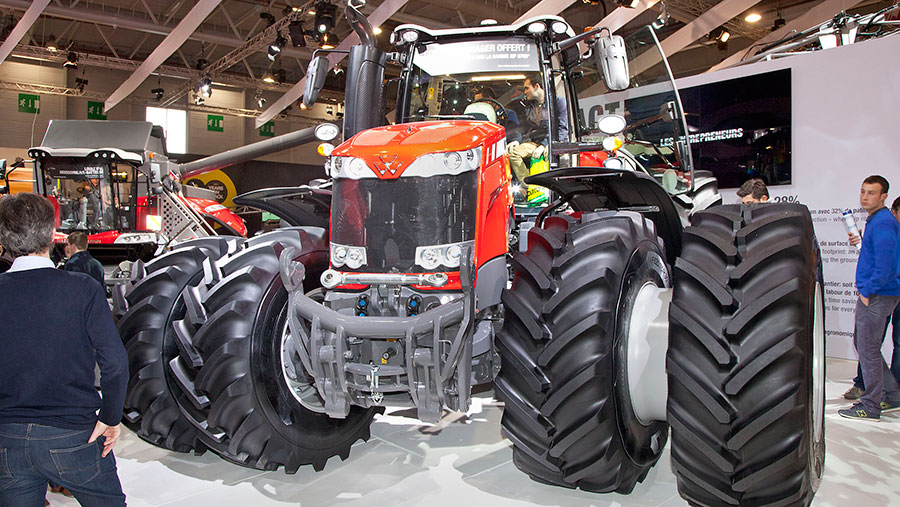 A new face in Massey Ferguson’s 8700 series has taken max power to 400hp and, in doing so, becomes the most powerful tractor the firm has ever made.

The 8740 gets that output as standard, with an extra bit of poke provided by a boost to 405hp during transport. 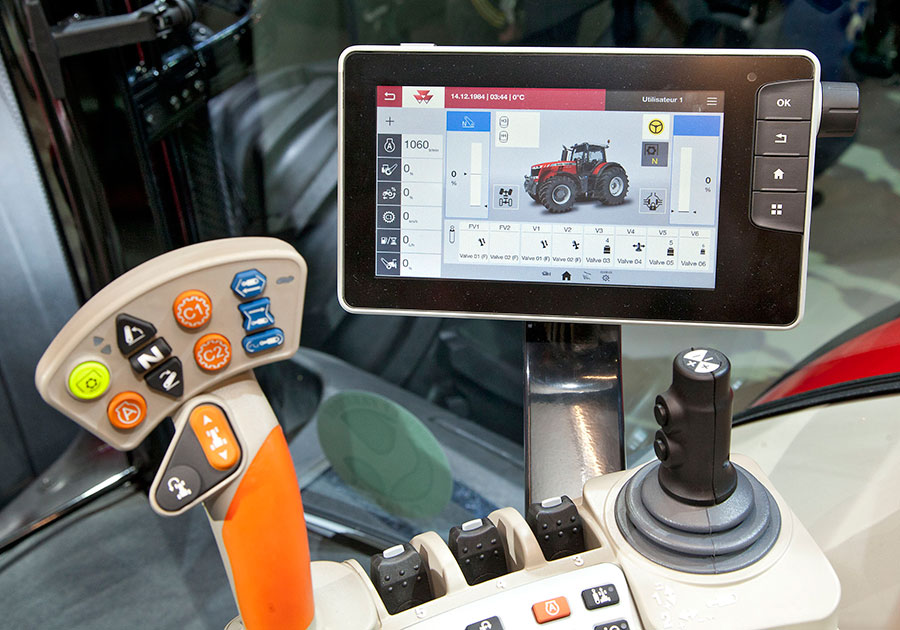 Like Valtra, MF was also showing off a new 9in monitor but despite their Agco affiliation, the two screens operate very differently.

Massey says the tablet-style Datatronic will offer simpler menus than before, including easier access to the mapping facilities, section control, variable rate applications and machinery monitoring. 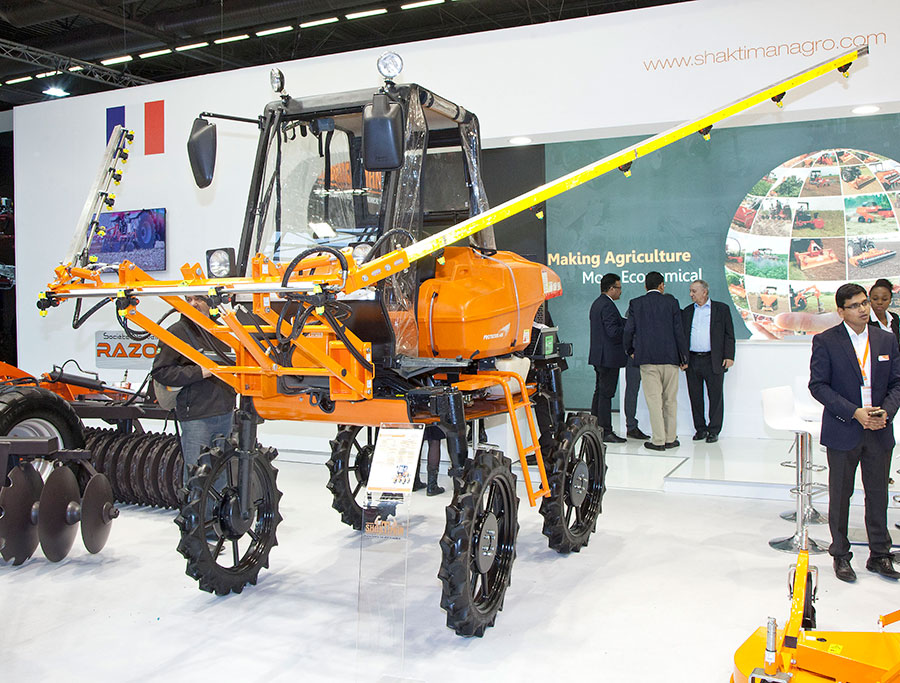 You might snigger, but Indian maker Shaktiman reckons its peculiar-looking self-propelled sprayer has European appeal and has applied for EU certification.

Don’t expect the creature comforts of modern-day self-propelleds – drivers get a plastic-sided cab and the diddy proportions leave space for a 600-litre tank, 8m boom and a 23hp, three-cylinder Lombardini motor.

The hydrostatic transmission comes from Japan, but the wafer thin 120/90 R26 footwear limits it to a top speed of 10kph. 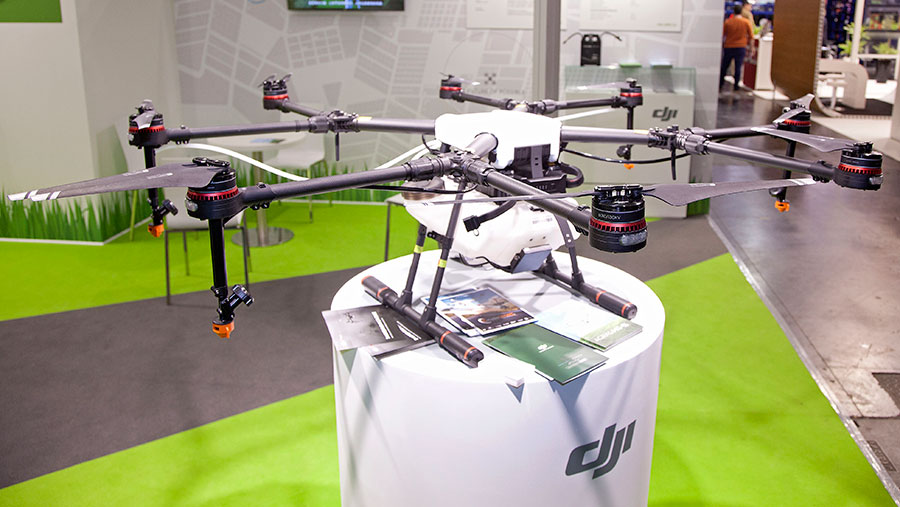 Tech giant DJI was showing off the latest crop-spraying drone it hopes to start selling in Europe.

The MG-1s is the second sprayer to be built by the maker, with the first-generation machine selling more than 2,500 units in China and 700 in South Korea.

As yet no machines have been sold in EU countries, due largely to questions over whether it is legal to do so.

But the maker was using Sima to gauge interest in the concept before taking its European launch plans further.

The 10-litre tank means it’s unlikely to be used for broad-acre arable, but those growing high-value fruit crops are apparently already showing interest.

It could also be used for spot-spraying duties, such as taking out blackgrass patches.

The MG-1S is operated using DJI’s own controller and it can be set to fly manually or in fully automatic mode.

For this, the operator just plots the field boundary, sets the flying speed and rate and the drone will work its own way across the field.

When full the unit tips the scales at 24kg and the eight rotors will keep it in the air for roughly 10mins before it needs charging.

At the business end, there are four nozzles positioned directly below the rotor pivot where there’s the least turbulence. 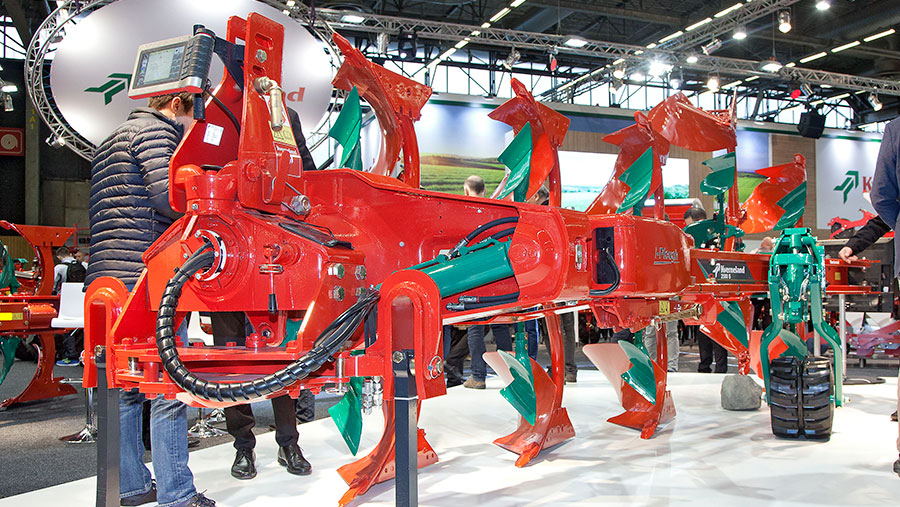 Those that like their ploughing to be arrow-straight at all times could find themselves warming to the idea of Kverneland’s ultra-clever iPlough.

Thanks to GPS and an Isobus controller, the plough can iron out massive kinks in one pass by tweaking furrow width on the move. On top of that, the controller can be used to adjust the rear depth wheel and plough angle.

There’s also a new manual adjuster for setting both skimmers at the same time.

This is only available on the iPlough at the moment, but is likely to be rolled out on some of the maker’s higher-spec manual ploughs. 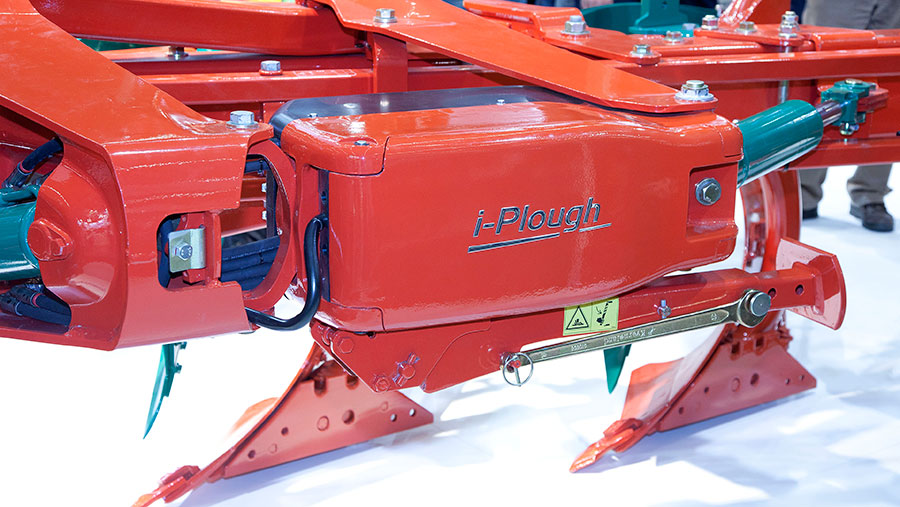 The iPlough comes with a 280hp headstock and is available with four to six furrows.

There’s the option of shearbolt or auto-reset protection, with the latter using a leaf-spring system.

Kverneland has designed the plough so almost all elements can be adjusted without tools and there’s a pivoting cross bar to make it easier to manage on the road.

The machine on show at Sima was also sporting a prototype track in place of the usual depth wheel.

This is designed to help the plough travel better in particularly sandy soils and maintain a constant depth.

It’s not available yet though. 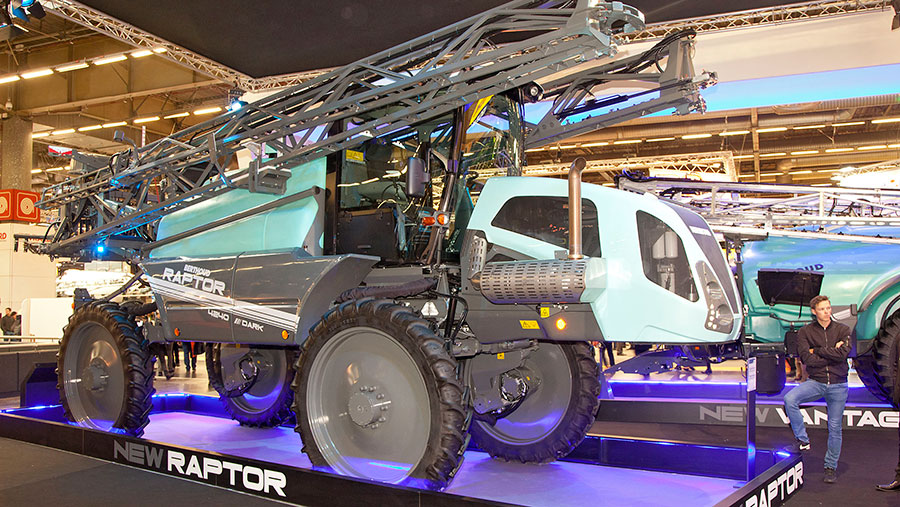 Berthoud has added a few updates to its Raptor self-propelled sprayer and given it a new darker colour scheme – called Dark, funnily enough.

The upgrades include a new cab, hydraulic height adjustment and an electronic spray controller that adjusts flow for different spraying speeds without changing the nozzle.

If you pick the hydraulic height adjustment option ground clearance can be adjusted from 120cm to 180cm.

Track width can also be pushed out from 225cm to 295hp, but this option comes as standard.

It’s also available with a forward-control cab that raises and lowers hydraulically. 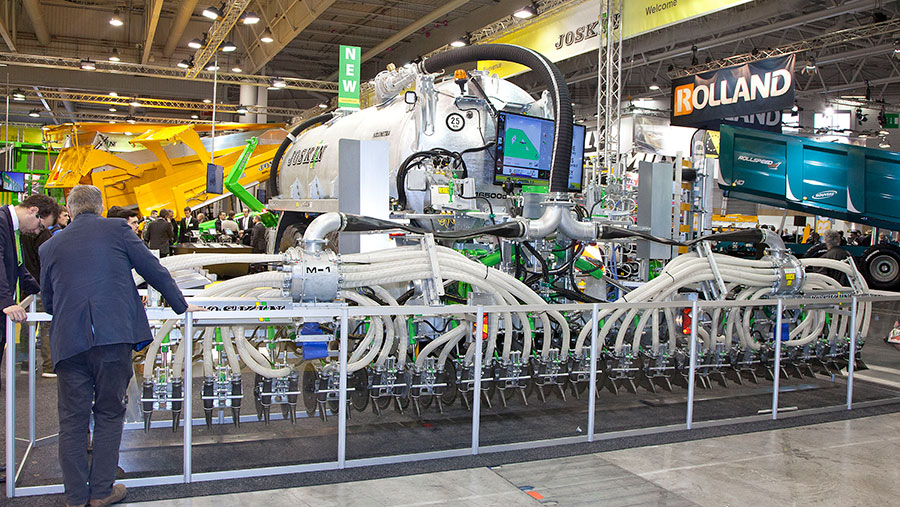 Joskin’s high-tech Solodisc XXL injector is one of the latest machines developed to deal with the gallons of digestate coming out of AD plants.

Previously the biggest Solodisc injector built by the maker was 7.75m wide, but now that’s been upped to 8.75m.

According to Joskin, customers are asking for machines even wider than this, but the weight of the rig means this is about as wide as they can go. 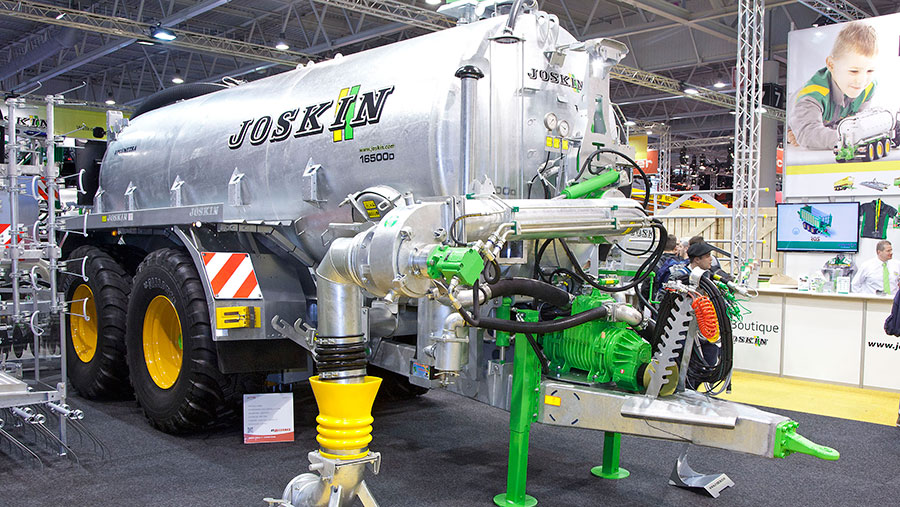 The spacing between discs has been reduced to 18.75cm so that each double disc unit covers 37.5cm.

A new option is automatic GPS section control, which switches each unit off individually and lifts it out of work.

This uses a hydraulic pincher to crush the pipe and stop the flow of slurry.

There’s also a ram on each disc unit that simultaneously lifts it out of work.

Joskin says more and more of its customers are switching from dribble bars to injectors as nutrient losses can be reduced from 30% or more to about 15%. There’s also less odour and it can be used on both grass and growing crops.

There’s also less odour and it can be used on both grass and growing crops.

A 8.25m Solodisc XXL with auto-section control has a list price of about €42,000. The system would typically be teamed to a tanker with at least a 16cu m, such as Joskin’s fully galvanised Volumetra.

The system would typically be teamed to a tanker with at least a 16cu m, such as Joskin’s fully galvanised Volumetra.