New tractors and telehandlers stole the limelight at Sima, with Case, New Holland and a couple of lesser-known brands launching new models. 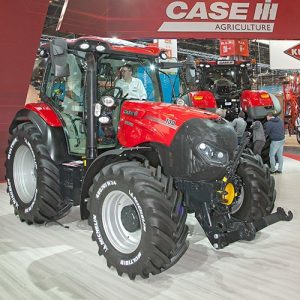 The red model is based on the Luxxum chassis and gets a new name – Versum.

It comes with a stepless CVX transmission and high-spec, four-post cab to bring a bit more glamour to the sub-150hp bracket.

Previously, the smallest tractor available with a stepless transmission was the heavier-set Maxxum (116-145hp).

Max power comes 10hp higher on each model and torque ranges from 520Nm on the smallest to 630Nm for the top dog.

There’s no word on price yet. As a guide, the top Luxxum costs around the £75,000-mark, so one can expect to fork out a fair chunk more than that.

New Holland’s version shares the same spec and is called the T5 AutoCommand. 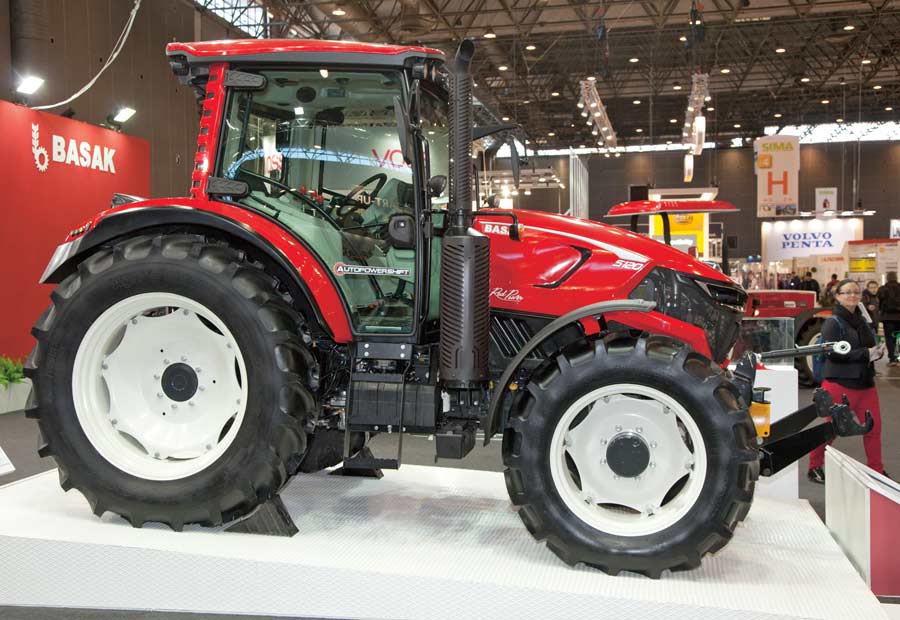 Of the four main tractor makers in Turkey, three have already made it to the UK in one guise or another.

Turk Traktor has appeared sporting New Holland livery, Hattat produced the old Valtra A-series and more recently Armatrac has been pushing hard to get its own foothold in the market.

But now Basak, which hails from Sakarya (about 100 miles east of Istanbul), is hoping to make its mark.

The brand has historically concentrated on eastern European and African markets, but with the launch of its new 500-series it’s setting its sights on the West.

The new models feature Tier 4 four-cylinder engines from Deutz and come with power outputs of 90hp, 105hp or 120hp.

A ZF four-speed powershift transmission is also included in the package, along with electro-hydraulic shuttle and a list of other fairly familiar components.

Five spools are on offer, two of which are electric, and it has three pto speeds.

The firm also has a telehandler in its line-up, which sports a 3.5t lift capacity and 7m reach.

There was a brand-new face in the tractor world with Mancel taking a large Sima show plot to showcase its burgeoning fleet, which has only been in existence for three months. 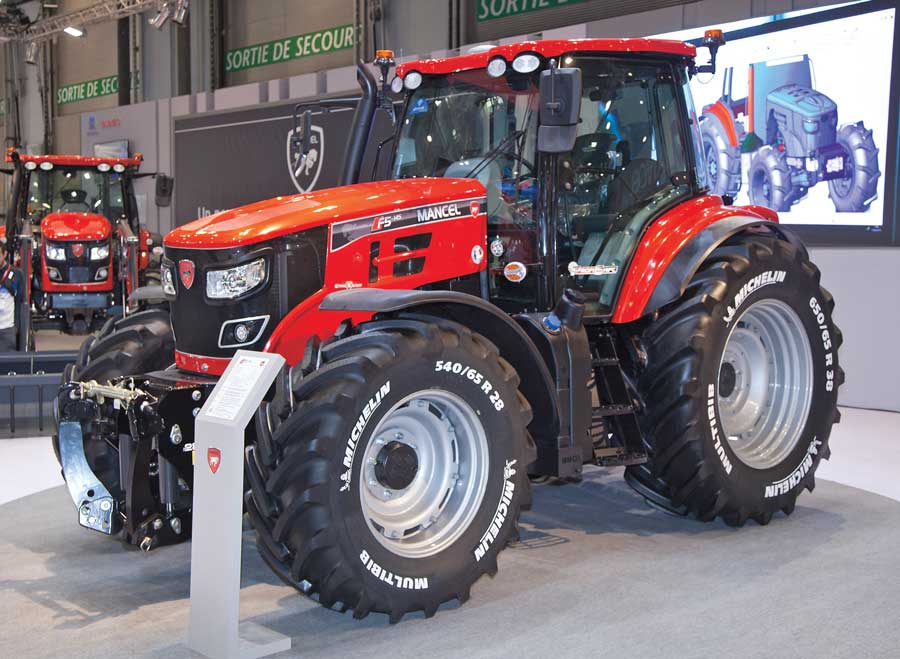 The YTO-owned brand forms a new European arm of the Chinese maker.

As with other relatively unknown tractor makers, the running gear comes from decent stock – an FPT 4.5-litre four-cylinder engine provides 636Nm of torque and it sits on Carraro axles.

The suspended cab comes with air conditioning as standard, too.

Although owned by the biggest tractor brand in China, more than 90% of the parts are designed and made in Europe (the majority in France).

Even the powershift transmission is made in-house by Mancel at its factory in Saint Dizier, 150 miles east of Paris.

The company is currently trying to assemble a UK dealer network. 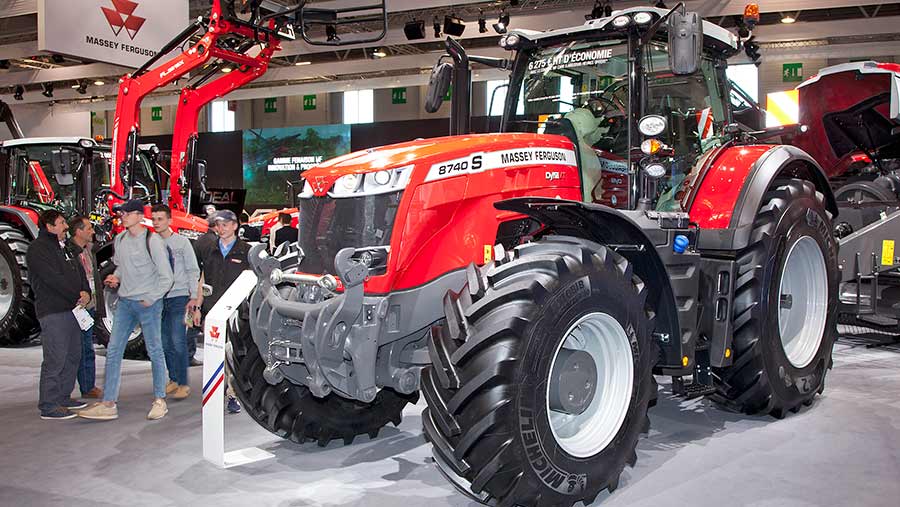 In particular, the latest versions have cleaned up their act to Stage 5 standard by adding a maintenance-free soot catalyst to the 8.4-litre, six-cylinder engines. This avoids the regular servicing required with a diesel particulate filter.

The soot catalyst requires occasional regeneration, but this happens automatically – if the engine is hot, the soot will burn off naturally.

This new after-treatment kit is fitted outside the bonnet, so doesn’t require any changes to the tractor’s existing shell. The only obvious difference is a narrower exhaust pipe.

Power outputs in the range run from 270hp to 400hp and all models come with Massey’s Dyna-VT stepless gearbox.

Increasing demand from contractors for high-capacity tractor loaders has prompted MX to build its biggest unit yet. 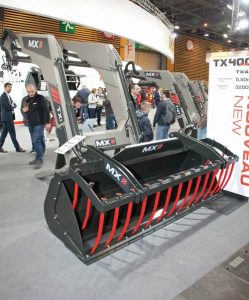 According to the firm, high-horsepower tractors fitted with these loaders are slowly taking the place of telehandlers in the field.

This is thanks to the fact they have better towing capacity, improved stability and a more comfortable cab.

To prevent the need for grafting on different brackets or shelling out for new implements, the range comes with a universal carriage that will accept most attachment systems.

MX offers a number of its own electronic joysticks, but for buyers wanting to use their tractor’s own joystick, there’s the option of tapping into the mid-mounted spools.

Thanks to a nifty air tank housed in the wheel rim, a new central tyre inflation system from French firm Sodijantes promises to pump tractor tyres up in about a minute.

This makes the new setup 10 times faster than most current systems that need to wait for a compressor to plug away at the job, the company says, and means operators are more likely to use it regularly. 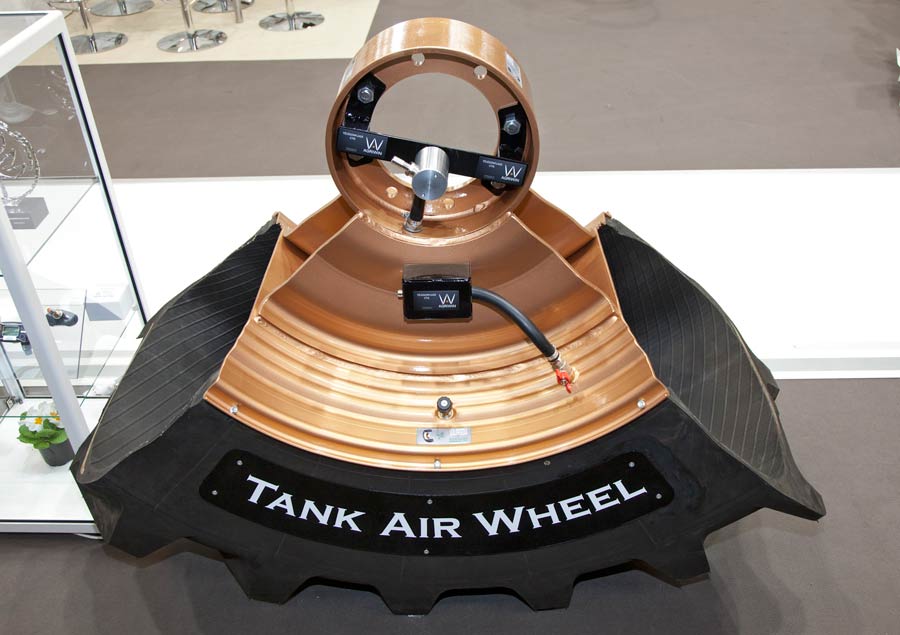 Once the stock of pressurised air has been spent, the tank will automatically refill (using a compressor) to a pressure of 6bar. This will then stay in reserve until it’s needed again.

Figures from the company suggest that making use of central tyre inflation systems like this to regularly adjust pressure can cut fuel use by up to 20% and reduce tyre wear by 50%. 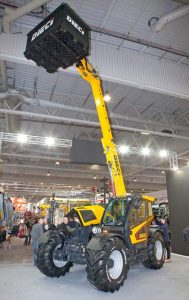 Dieci has employed the services of a fancy Italian interior designer to spruce up the ageing cab on its Evo 2 telehandlers.

Changes are restrained rather than revolutionary, but see cab suspension, a redesigned terminal and soft-touch cladding added to the layout. There’s also a new electric handbrake.

Most of the machine’s stand-out features remain the same, including the single-piece door with electric window and most of the key controls.

As for running gear, it uses an FPT 4.5-litre engine rated to 138hp (peaking at 153hp) and a hydrostatic transmission. 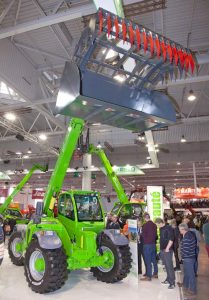 Merlo had more than 20 machines on its stand, but pride of place was a new farmer-spec telehandler aimed at AD customers and contractors that want an alternative to running large shovels.

It carries an FPT 4.5-litre four-cylinder engine churning out 170hp, running through a CVTronic hydrostatic transmission.

Merlo is famed for sticking with cab suspension for its handlers while the rest of the market make do with boom softening to smooth the ride and the TR65.9CS is no different – it gets a cushioning kit as standard, with boom suspension an extra.

The company has got rid of the irritating trigger switch to engage the hydraulics, instead using electro-static pulses detected from the driver’s hand to activate the boom.

The monster machine measure 5,280mm long and strides straight to the top of the Turbofarmer range, nudging the previous range-topper – the 50.8T CS – from its perch.