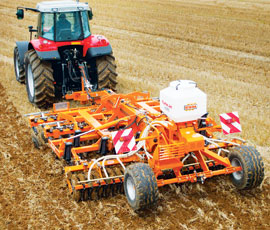 Britain may not have many big machinery makers, but it still boasts a clutch of small-to-medium firms that are producing well-designed equipment that farmers like. And one of the best-known flag-bearers for UK agricultural engineering for many years has been Sleaford cultivator maker Simba.

Or at least it was until last April, when the firm announced that it had been bought by US firm Great Plains.

At first sight, the prospects for the Lincolnshire firm didn’t look good. There’s a history of big companies swallowing their acquisitions much like a snake digests a hapless mammal, slowly absorbing the best bits, excreting the unwanted parts and then moving on to other prey.

Some UK farmers no doubt thought that might be the future for Simba, too. However, the first detailed plans emerging from the new company – now called Simba Great Plains – suggest the exact opposite is true.

Who is Great Plains?

The first surprise is that Great Plains is a private company rather than a public one, so it doesn’t have hordes of hungry investors to support. The second surprise is that it’s reckoned to be the biggest privately owned farm implement company in the USA.

The third surprise is its relative youth – it was founded just 35 years ago in Salina, Kansas by Roy Applequist. His father was a tool and die maker and made parts for aircraft before diversifying into farm machinery components and chaser bins.

Despite having no experience in making seed drills, the new firm took the simple step of asking local farmers what sort of drill they wanted. The answer came back loud and clear that they wanted a 9m folding drill, even though the only ones available at the time were just 4.5m wide.

Within three years Great Plains was selling 100 drills a year and by the mid-1980s sales had jumped to more than 30 drills a day.

The firm was also an early developer of direct drills. Some of the impetus for that come from UK firm Moore, which exported several of its direct drills to Kansas farmers at the same time.

Great Plains was impressed with the way the drill worked, though it opted for a triple disc system for its first direct drills rather than the single disc system used by Moore. At the same time, the firm was also talking to Monsanto, whose new Roundup-Ready soya beans required the introduction of a new type of direct drill that could go straight into stubble.

The push into export markets has come relatively recently, however. “You could say that we had a bit of the Henry Ford philosophy – you can have any colour as long as it’s black – so we just offered our standard build,” says Great Plains International’s president Daniel Rauchholz. “It took a while to understand the needs of those new markets.”

Great Plains’ philosophy now is to offer a mind-bogglingly wide choice of models and price-tags so that no potential customer can ever say that there isn’t a machine to suit their needs.

If you want a 9m drill, for instance, you can choose from a total of eight different model line-ups with a price difference of $100,000 between the cheapest and most expensive model.

“We don’t want to tell farmers what they should have,” says Mr Rauchholz. “they know their farms and soils – we want them to choose what’s right for their situation.”

The success of that philosophy is evident in the firm’s ever-rising sales and market share increases around the world. Great Plains reckons it has a 40% share of the drill market in the USA and a 25-30% share of the cultivator market. Sales are rising in eastern European markets too, particularly in Ukraine where it is now the biggest drill seller

Being a private company has also allowed it to spend money on research and development and make almost everything in-house to an extent that would rarely be possible for a public company.

How does Simba fit into all this?

Simba is a relatively young company too, making its first cultivators in 1976 (the same year as Great Plains). It was started by Lincolnshire farmer Keith Burton who moved to Africa and wanted an ultra-tough set of discs to rip up the hard virgin soils in that part of the world.

He soon found that there was a demand among UK farmers – especially those on tough soils – for the heavyweight kit too.

The product line was dominated by discs in the early years, then tine-and-disc combinations, then cultivators that could incorporate chopped straw following the 1988 straw-burning ban.

Exports at the Lincolnshire firm currently account for 30% of sales and are rising, though they have yet to hit the 60% export figure of the 1980s (albeit involving a smaller overall turnover).

Simba lost its drill line-up in 2010, when German company Horsch (which had supplied them to Simba for some years) decided to sell them under its own name.

So an allegiance with a drill maker was an urgent requirement and prompted Simba to approach Great Plains.

Now, with Great Plains’ drills and Simba’s cultivators and going by the name of Simba Great Plains – the company has the product range to tackle both western and eastern European markets, says managing director Colin Adams. And the strength of its export push is likely to be far greater than Simba would ever have been able to muster under its own steam.

Not that Simba lacks a good sales network in Europe, according to Colin Adams. It has 20 importers in different countries in addition to the 100 or so outlets it has in the UK. Sales are going particularly well in Hungary, Bulgaria and the Baltic states and France is a particular bright spot in Western Europe.

What new machines will UK farmers be seeing?

Simba-made cultivators will be sold in Great Plains livery in some areas and some Great Plains models will be coming to the UK in Simba colours too. Jointly-designed machines are on the stocks too, says Mr Adams.

A new cultivator drill, designed jointly by Simba and Great Plains, is currently being built in the research and development workshops in Kansas and will make an appearance at this year’s Cereals Event. It’s an important machine that will be sold across Europe and is the first drill of this type that the US company has been involved with.

What else will Simba Great Plains be showing at the Cereals Event in June?

As well as the cultivator drill and Simba’s full range new home-grown TL and SLD cultivators, there will also be:

This combination unit is part of the firm’s “vertical tillage” range and uses a combination of cutting, mixing and levelling, but always working the soil vertically rather than horizontally.

A row of 56cm diameter fluted discs chops and mixes crop residues. They are followed by deep tines working at 20-28cm and a set of unusual rolling chopper reels to cut straw and bash clods. Simba says it will have two models in the UK in April for evaluation.

This was seen on the Great Plains stand at last month’s SIMA show in Paris. It’s designed to go into cultivated land, using a fluted disc/spring tine/crumbler roller combination. Two machines are already in the UK for evaluation.

These have a patented zone tillage disc followed by double-disc coulters and trailing press wheels. Weight can be transferred hydraulically from the grain cart to the implement and also separately to the wings.

The Spartan series is designed for seeding in cultivated land that has been consolidated and gives farmers the ability to seed direct if required.

This comes in both mounted and trailed form, and has narrow low-disturbance legs to give deep shattering without heave. Auto-set versions are available.