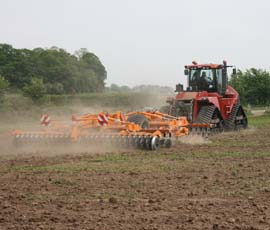 Launched at the Lamma show in January, Simba’s SLD cultivator is destined to replace the company’s successful Solo tillage train, which has been around since 1999.

Initially, it was seen as a machine to bridge the gap between the existing Solo and SL ranges, combining the qualities of both to produce a machine that is ideal for restructuring tough soils.

However, the development process has seen a few more things change.

The large, fixed row of 710mm (28in) discs has gone and been replaced by 600mm (20in) independently mounted and sprung variants.

The smaller discs give a finer and more uniform finish thanks to the higher rotation speeds, says the company. They also avoid leaving ridges in the centre and to the sides of cultivated land that can sometimes happen with fixed units.

Unlike the Solo, the front row of discs is angled one way and the rear row is angled the other way to leave a level finish. Discs are mounted at 250mm spacings, with an effective spacing of 125mm when the second row of discs is taken into account.

It’s also fitted with Pro-lift hydraulic reset legs that can work to a depth of 300mm (12in). These tines work up to 150mm (6in) deeper than the discs and can be fitted with different wings depending on the soil type.

Rear consolidation is provided by a 700mm DD roller with rings at 230mm spacings.

The whole rig comes on flotation tyres with hydraulic braking as standard and the 6m version folds to 3m for transport. It’s also possible to add an optional rear drawbar for those wanting to trail a press with or without levelling boards.