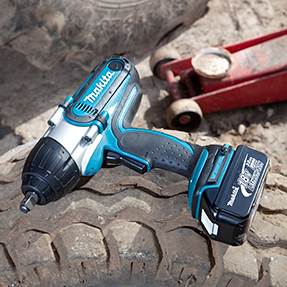 Balance: The biggest machine has hint of top-heaviness, although front-to-back balance is good. Weighty set-up helps it stand square when carrying a 27mm socket.

Feels rock solid with tough turquoise outer, rubber covered handle and rubber gearbox housing protection. Top marks to the LED light that can be turned on with a recessed flick-switch for hard-to-see places.

No battery life indicator and the charger makes a real racket. Enormous carry box can double-up as a suitcase for summer holidays.

Verdict: Heaviest, tallest and longest are unattractive traits and make it cumbersome around the workshop. Two-way seesaw trigger to select forward and reverse can be clumsy and it’s the only one without a feathered drive.

However, it’s the smoothest to use, had a decent battery life and turned the wheel second quickest, so we warmed to it over time. 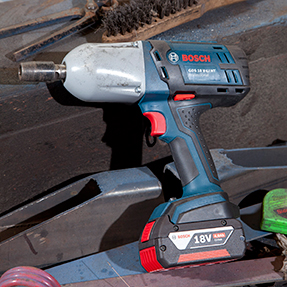 Balance: Top half is heavy, particularly the nose, and that doesn’t improve once it has got a socket on. That said, it’s easier on the arm than the Makita. Mid-range for weight but a long body makes tight spaces tricky.

Notes: Less rubber than its mid-spec rival the Makita and the plastic battery base slips off slopey surfaces too easily. LED worklight positioned above the battery so doesn’t shine where you’re working. Charger bleeps when the battery is full and there’s a three-stage life indicator.

Verdict: Beat the big boys in the battery life test and was generally a middle-of-the-road performer. Big maximum torque claims were unfulfilled. However, it managed to turn the test wheel pretty quickly, was smooth when driving a nut and was the quickest to charge. Solidly made and a reliable all-rounder.

Best for: A quick charge 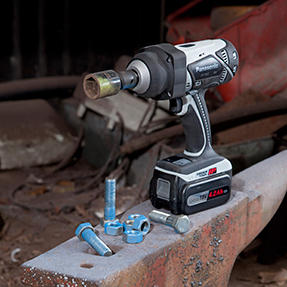 Balance: Well-balanced but its lightweight design means it plops straight over with a socket on the nose. Most of the weight is in the big battery.

Notes: Square-shaped rubber cover over the gearbox housing should help protect it from drops to the floor. It’s also comfortable to grip and there’s a three-stage battery life indicator. Low vibrations and long battery life, but slow to charge.

Verdict: The surprise package. Small and feather-light, it’s more of an all-rounder than its rivals and operators won’t end up with forearms like Popeye. Compact size also makes it better in tight spots.

Drive head doesn’t turn as quickly as the others, particularly under load, but it’s a case of slow and steady wins the race in the battery life department. Slow spinning speed also makes it one of the more comfortable to use. 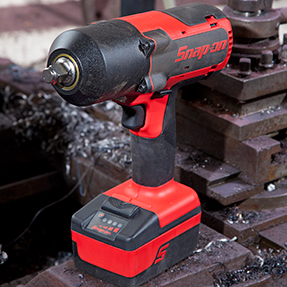 Balance: Well-balanced and similar in feel to the Milwaukee. Solid base kept it standing with a socket on the nose and it’s just about light enough to be held in the air for short periods of time.

Notes: Feels more platicky than some of the others and it’s short of rubber protection around the metal gearbox housing. However, there are gummy grippers on the base and side of the battery so it should stay wherever you leave it.

There’s also a four-stage battery indicator and LED light that only turns on with the trigger pulled. Feels like a quality tool aside from the tacky battery release. Comes in a bag rather than a case.

Verdict: Big expectations weren’t completely fulfilled. Joint highest with its obvious rival – Milwaukee – when it came to undoing tight bolts but woefully poor battery life. Average in both size and weight but a pricey bit of kit and slow to charge. Poor man’s Milwaukee at posh man’s price. 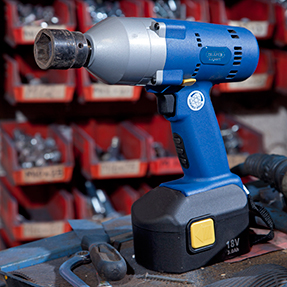 Balance: Nose heavy but the upwards-pointing angle of the drive head means it manages to keep itself standing straight with a socket on.

Notes: Two slim rubber strips down the handle do little to limit the rattle of the cheap plastic shell during work and the resultant tennis elbow symptoms. Looks and sounds like a hairdryer, with no light or battery indicator, but is well-sized for in-the-air jobs. Zero points for design – not one to show your mates…

Verdict: Lightest and one of the shortest on test. Its half-inch head turned the fastest without a load but dropped to the second slowest once there was some work to do.

Battery longevity wasn’t the best but beat the two favourites – Snap-on and Milwaukee – and was pretty quick to charge. The one we’d be least likely to buy, but shop around and you might pick it up for a throwaway price.

Best for: Shopping on a shoestring budget 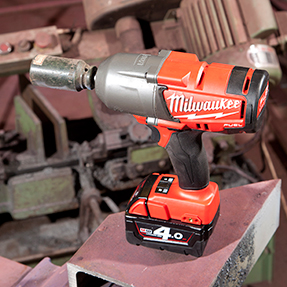 Balance: A weighty thing but better balanced than the other heavyweight – the Makita. It was the most stable with the 27mm bit on.

Notes: Thumbs up to the rubber-based battery but there’s little protection around the gearbox housing. The only tool to have two selectable speed settings, which will be handy.

Has both a four-stage battery life indicator and a light that comes on with a pull of the trigger and stays on for 10 seconds. Fan powerful enough to lift up a girl’s skirt.

Verdict: Sounds like a beast, but failed to live up to the ludicrous-sounding claims on the box. Still managed the equal-highest undoing capacity and spun the quickest under load by some distance.

One of the heaviest but manages to keep a pretty short head. Charged pretty quickly but battery life was the major disappointment. It’s the winner for heavy-duty tasks.

The constant torque provided by a standard cordless drill makes it ideal for accurate work, but also a real wrist-breaker should the bit jam. They usually have a keyless chuck that accepts most bits, but also adds body length. A slip clutch stops the drill driving at a settable resistance.

Next up in the drilling pyramid is the hammer drill. As the name suggests, this batters its way through a surface by producing rapid impacts from directly behind the drill head. It can feel like operating a .50-cal machine gun but is just the job for ploughing through masonry.

Forget about it for screwing, though – even a big bloke leaning all his bodyweight on the back will not stop the hammering effect bouncing the drill, which will quickly mash the screw head.

Impact drivers are visually shorter and stumpier than a drill and have a hex receiver rather than a long chuck.

Instead of the battering force coming from directly behind the bit, a driver uses a T-shaped anvil to push against the rotating mechanism and create fast-paced impacts perpendicular to the bit. The combination of rotation and concussive blows creates a far greater twisting force than a drill can offer.

This gets the screw turning without putting more pressure on the operator’s wrist and also avoids the problem of the bit bouncing in and out of the screw head.

If you’re using an impact driver you should also use impact sockets – regular sockets can shatter with the impact force – and the constant tapping makes them louder than a drill.

How we tested them 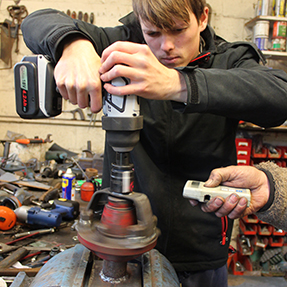 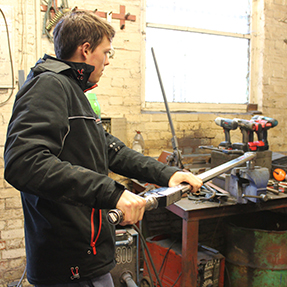 Weight: Of the unit with the battery attached but no socket.

Length: From the tip of the drive head to the back of the body.

Balance: Subjective. Spread of weight and ability to stand up unaided.

Claimed max torque: Maximum tightening torque according to the maker.

Tested max undoing: Its ability to undo a nut tightened to a set torque.

Impacts per minute: Number of times a weight pushes against an anvil inside the driver.

Speed, no load: Spinning speed of the drive head load-free.

Battery: All were 18V lithium-ion.

Charge time: Of each battery from flat. Monitored while eating custard creams.

Battery life under load: Turning a wheel bearing of constant resistance. Total time is the sum of the 15-second stints completed.

Price: Including the tool, two batteries and a carry case. VAT added.